A 20th anniversary to remember 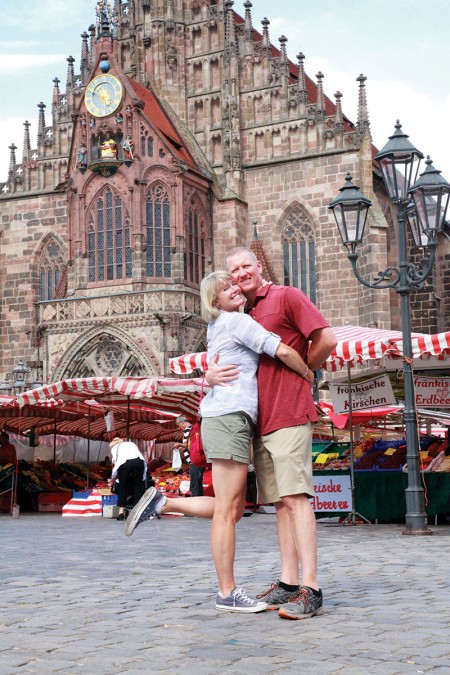 EUROPEAN-HONEYMOON REDUX Carrie and Dave Stallwitz visit the Frauenkirche (“Church of our Lady”) in Nuremberg, Germany, on their 20th-anniversary trip with family.

Dave and Carrie Stallwitz treasured the memories of the unforgettable journey they took back in 1998, on their European honeymoon. For years they’d thought of returning, this time sharing the trip with their two teenage daughters. With their 20th anniversary coming up, they decided to do it – with Reece, then 14, and Evynn, then 12, in tow.

The idea would be to start in Greece, on the island of Crete, where the couple had begun their first trip to Europe. Then they’d go to Athens for a tour of the ancient city of monuments, and end up in Germany, where Dave had some distant relatives his father had tracked down, and they had taken the opportunity of their trip to meet them. This time, they would present the new generation to their family in the Old Country.

The girls had never been abroad, and while they’d taken long road trips with their parents, they’d never flown internationally.

“When we started talking about logistics – we’ll have to leave our house at 4 a.m., I told them, and we’re going to travel for 24 hours – and by the time we get to our destination it’s going to be almost bedtime,” said Carrie. “That’s when it started to hit them how far away they were going.”

The girls awoke at the crack of dawn, nervous and excited. Their first layover would be in Newark – a long one, with enough time to explore the city.

“The girls had never been to New York, so we hopped into an Uber and caught the ferry to go to Ellis Island and around the Statue of Liberty,” she said. 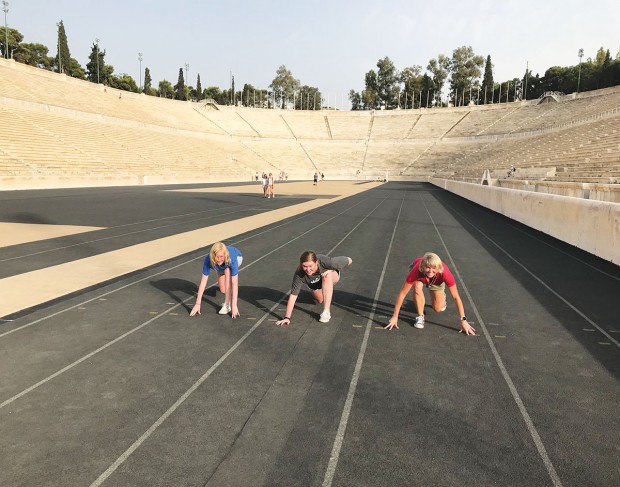 WHEN IN GREECE Evynn Stallwitz, Reece and mom Carrie get ready to race at the Panathenaic Stadium in Athens, where the opening ceremony of the first modern Olympics was held.

From Newark they flew to Athens, and from Athens they flew to the island of Crete, where they stayed in the picturesque seaside town of Elounda. It was as they had remembered it – Santorini-esque whitewashed walls against the blue sky. Predictably, there had been development in the intervening two decades – a new highway, more houses – but unlike the Caribbean resorts they’d visited, which were crowded with megahotel complexes, the development was at a much smaller, more intimate scale.

“You’re not going to see a 20-story Hilton,” Carrie said. “In the town where we stayed, I don’t think there were any buildings over four stories, and that was a rarity.”

First and foremost on the agenda: relaxing.

“It was so great to spend time as a family and not have all the commitments – having to go to a meeting, drive a kid to practice, study for finals,” Carrie said. “The pace was just slower there. There was no rushing.”

She’ll never forget their first meal together. Despite the arduous transatlantic journey, they lingered for almost two hours together beside the sea, talking, enjoying the delicious food, taking in the crystalline aquamarine waters.

“The kids were amazed,” she said. “Even though we were exhausted and cranky, we just enjoyed that feeling of not having the external pressures.” 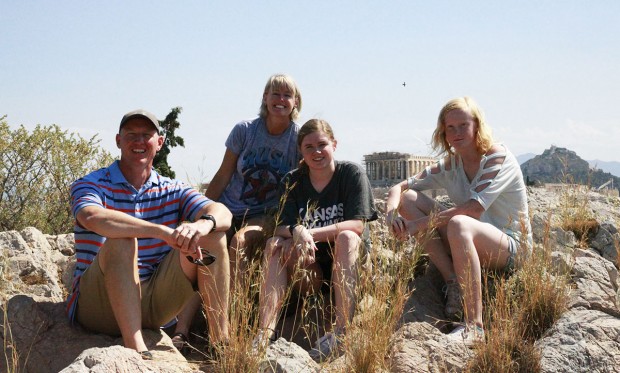 CREATING MEMORIES (From left) Dave, Carrie, Reece and Evynn Stallwitz at Philopappou Hill in Athens, with the Parthenon in the background.

In Crete they divided their time between the beach and explorations of the mythological history of the place. They went up into the hills to see Dikteon Cave, where the goddess Rhea was believed to have given birth to Zeus.

Then it was on to Athens, where they stayed at an Airbnb apartment in a cosmopolitan neighborhood in the heart of the city. Here they did the typical tourist things – the Parthenon, Acropolis, Ancient Agora. They arrived at the ancient Olympic Stadium near the end of the day, and it was nearly empty. The girls raced each other around the Olympic track, while Dave and Carrie took in the wonder of the place in near solitude.

Fans of the Percy Jackson and the Olympians series, the girls felt a connection to the mythology of the place, so they were able to engage with a five-hour walking history tour. For Carrie, as a writer specializing in architectural themes, it was thrilling to see some of the world’s most distinctive buildings.

A glimpse into Athens’ more recent history was an aside that Carrie found more fascinating than the rest of the family. The family signed up for a volunteer guide through a local Athens website. George was his name, and he happened to live in the city’s anarchist hotspot, which he included on the four-hour tour. Exarcheia, as it’s called, has been the hub of generations of social movements, and its edgy, alternative vibe has drawn a culture of artists and creatives who have left their mark with extraordinary street art. 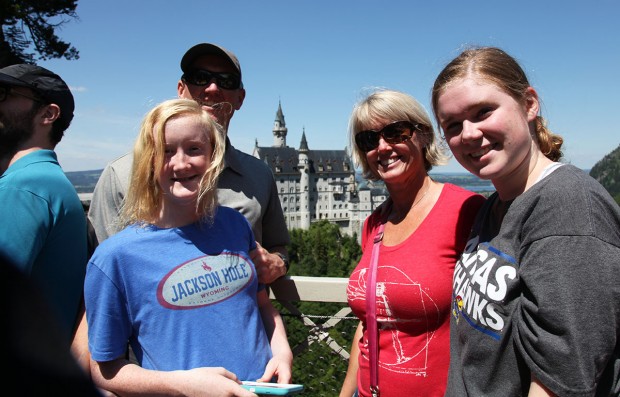 Now it was time for something completely different: A trip into their own family’s history in the Bavarian countryside. They flew from Athens to Munich and rented a Mercedes-Benz, a highlight for Dave who hit the Autobahn and, with no speed limits, reached 110 mph. Their destination: Schwabach, a town not far from Nuremberg.

“The German Stallwitzes are so friendly, so hospitable,” said Carrie. When they had reached out to the family matriarch, she said, absolutely, you need to stay with us.” The mother, Hanne, is in her 60s and has two adult daughters, Gabi and Elke.

“It was so great – Hanne told us a lot of family stories going back in history,” said Carrie. Dave is a World War II buff, so they toured Nuremberg, including the Nazi Party Rally Grounds ((Reichsparteitagsgelände) and Zeppelin Field. They saw the Documentation Center, part of a complex that includes an imposing Congress Hall inspired by the Roman Colosseum that was never completed. The Documentation Center has been turned into a museum that “informs visitors about the causes, the context and the repercussions of the National Socialist reign of terror,” according to its website.

The girls were deeply affected by the experience. “They knew about the Holocaust from a kids’ perspective…, but it wasn’t until we got to the Documentation Center and they saw the museum and some of the displays that they really understood.”

They toured the castles and cathedrals of Nuremberg, as well, and were successful in fulfilling Reece’s biggest quest – to find a pair of Birkenstocks.

Their last night Gabi, one of the adult daughters, planned for a German-style grill party at her house, and her son in high school, Manuel, invited his friends. 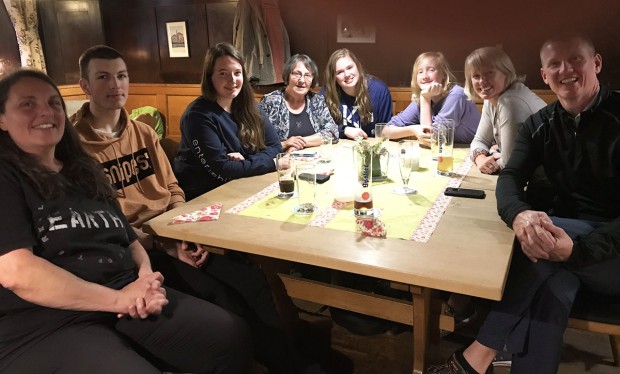 “They sat around the fire pit for several hours and talked about what it’s like to be a high schooler in Germany, and what it’s like in the U.S., and even though my daughters had never met these people before, and even though Manuel is German, he’s still a German teenager – and he was telling funny stories about doing things he wasn’t supposed to do.”

Next it was on to Munich for a few days, to stay with Hanne’s other daughter Elke. They went up the tower in Olympiapark for a fantastic sweeping view. They also went to BMW Welt, the BMW museum and production factory. They toured King Ludwig II’s Linderhof Palace and Neuschwanstein Castle, which inspired a young Walt Disney to create the Magic Kingdom. They made a stop in Oberammergau, the site of the original Passion Play. By luck, they were in Munich at the start of the World Cup, and were there the day Germany played (and was defeated by) Mexico in the opening rounds. They watched the game with 8,000 new friends at Koniglicher Hirschgarten, Munich’s largest beer garden.

The trip was a meaningful one on many levels, beginning from the moment they landed in Crete. “The island itself hadn’t changed much – it had better roads and a few more buildings, but was pretty much the same. But my husband and I were the ones that had changed,” said Carrie. For the couple, it gave them a chance to reflect on how far they’d come over the past 20 years. “It made us feel even stronger in our relationship.”

For the whole family, it was a chance to slow down and really listen to each other. “Those teenage years, when your kids are going through a lot of their own changes, hopefully it communicated with them we wanted to know what was going on with them,” she said. “It wasn’t all rainbows and unicorns every day, but for the most part, we sat down together for one or two meals every day in typical European fashion, nice long meals with real conversations.”

It also gave the girls the feeling that the world is accessible to them, she said. When they started talking about their next vacation, the girls piped up, “Hey, we want to go to London, or Paris, or New Zealand,” their mother said with a laugh.

“I hope it’s an experience our kids will always remember. We saw some amazing things, but I hope they remember the time we had together. I would say it’s the trip of a lifetime – but hopefully we’ll do it again.”