Learning from the Journey: Varsity Girls Soccer at Westbury Christian 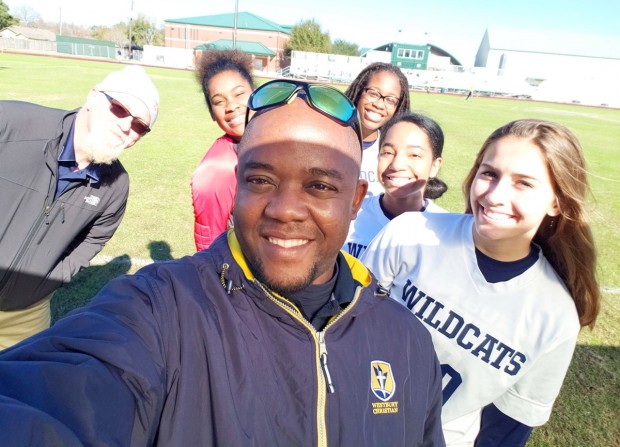 Recently I have been blessed with the opportunity to play on Westbury Christian’s Varsity Girls Soccer team. Truthfully, I didn't know what to expect. In such a small school, instead of specialists in any one sport, you often find athletes with varied interests and experience, as well as some who are new to the sport. Thinking about this possibility had me somewhat discouraged, especially since soccer is a sport where your anticipation is more critical than your reaction.

The team was underdeveloped in understanding and execution. It seemed like after every game, we left the field slightly more defeated than when we came. But recently, things have changed. On Dec. 4, we played the British International School, and I was terrified. A significant number of my previous soccer coaches were British natives, so I assumed that the game would be as painful to play as it would be to watch.

From the first whistle, my teammates were aggressive and persistent. That persistence would “pay off” with a final score of 2-2. For most, tying is merely an absence of failure. For us, though, the score reflected the work and dedication each player contributed to benefit the team as a whole. Considering we had grown used to losing, this was an amazing accomplishment.

But for me, it wasn’t the score that had me so ecstatic. In that game, I saw a passion and understanding in my teammates that I had never witnessed before. Each one of us understood their role as a player and executed it with determination. Though many players still had a limited understanding of some of the  basics of soccer, they continued to play and allowed themselves to learn from each mistake they made. Even when we were a goal down, no one blamed another player or became discouraged. Everyone continued to fulfill their role and trusted that as long as we worked as a team, goals would come, and they did.

That day I learned something important, something that went further than just soccer. I learned that the idea of “brains before brawn” wasn't an end all, be all statement. Sometimes your willingness to work through challenges is more important than your understanding of it. And that understanding can come by allowing yourself to make the wrong decision, so that you can better understand why a different choice is, in fact, the correct one.

I believe this is a lesson that too many people learn too late in life. Many times, we make decisions based on fear. Fear of being wrong, or fear of embarrassment. But God says in Deuteronomy 31:8, “He will never leave you nor forsake you. Do not be afraid; do not be discouraged.”

I believe that this is God calling us to face our problems head on, and not to let fear control our decisions, because with God everything is possible. We just have to believe it.