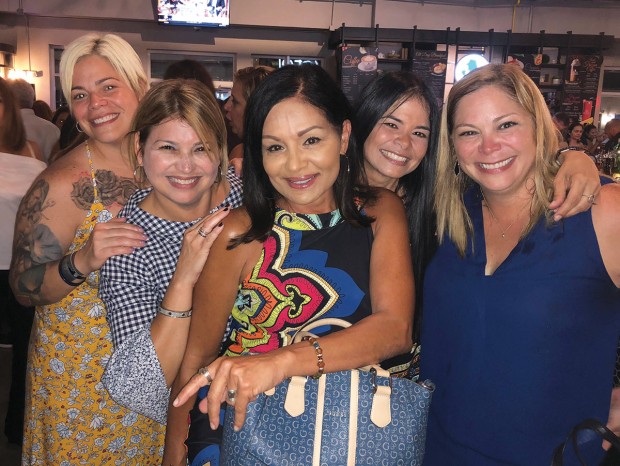 LAST NIGHT OUT Cousin Annette joined Gisselle and her sisters on their final outing, to Paseo Caribe, and the women were starstruck with a local actress, Alba Nydia Díaz, who graciously took a picture with them. From right: Gisselle Matta, Annette Oller, Alba Nydia Díaz, Ileana López and Aileene Chovanec.

Gisselle Matta and her family weathered the storm during Hurricane Harvey better than many. Their garage flooded and they lost a car, but after watching so many neighbors lose their homes, they counted themselves lucky.

Then, about a week later, came the news of Hurricane María. “We were like, ‘Oh, God,’” said Gisselle, a native of San Juan, Puerto Rico. With her parents, sisters and a whole web of extended family across the island, Gisselle feared the worst.

Fortunately, once again, the Mattas were spared. But it was a tense few days after one of the worst storms in American history before telephone contact was re-established and she could confirm that everyone was safe.

Puerto Rico, land of Ricky Martin, Jennifer López, Despacito crooner Luis Fonsi, West Side Story star Rita Moreno and baseball legend Roberto Clemente, was battered beyond anything the island had experienced in at least a century. Nearly 3,000 people lost their lives; hundreds of thousands were left homeless, without power or water for months. Damages were estimated at more than $100 billion.

But Puerto Ricans have bounced back with typical creativity and resilience, and within months, the tourism industry – a mainstay of the island’s economy – was up and running. In September, a year after the storm, Discover Puerto Rico announced that 90 percent of the hotel inventory had been restored.

A PERFECT BEACH Mar Chiquita in Manatí is one of Puerto Rico’s gems. The Mattas headed to the cove on a rainy day, but it ended up a great beach day nevertheless. Visitors need a GPS to get there and water shoes to climb on the rocks, says Gisselle. “Fantastic place, totally worth the drive.”

Brad Dean, CEO of Discover Puerto Rico, announced that 4,000 restaurants, 189 attractions, 13 golf courses and 16 casinos had re-opened as of the anniversary of the hurricane. The island had 14 cruise ships making ports of call there as of September, four more than last year. Airlines are making more than 100 daily flights to the island.

Still, Puerto Rico has a long way to go, especially to rebuild its already fragile economy. The blue tarps that cover damaged roofs are everywhere, wrote Vann Newkirk in The Atlantic recently — as are the signs saying “Puerto Rico se levanta” (a phrase that lends itself to multiple interpretations, from “Puerto Rico will rise” to “Puerto Rico is lifting itself up”).

For those who are feeling put off by the photos of mass destruction that flooded the media after the storm, or maybe even guilty about lounging in a place where some are still struggling to piece their lives back together, Travel + Leisure has a concise answer: The island needs you now, more than ever. Puerto Rico is as magical a place to visit as it’s ever been, and your vacation can provide a much-needed infusion of cash into the economy.

Puerto Ricans themselves are rolling out the welcome mat in a thousand creative ways; Puerto Rican composer, playwright and actor Lin-Manuel Miranda, for his part, launched a multimillion-dollar arts fund, and is taking the title role for all 24 performances of Hamilton this month at Corporación del Centro de Bellas Artes in San Juan, with all proceeds to benefit that arts community. 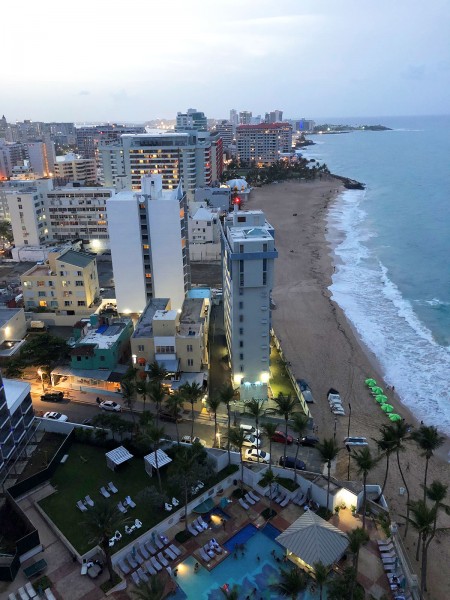 There are also many opportunities to lend a hand through volunteerism programs. And as always, if you want to support the local economy, look for ways to buy local.

“Tourism allows travelers to experience first-hand how the island was affected by the hurricanes, and gives them the opportunity to get involved to help communities rebuild,” said Fernando Lloveras San Miguel, president of Para la Naturaleza (For Nature), a nonprofitorganization that manages more than 60 natural areas and organizes transformative experiences in nature.

The organization also allows visitors to participate in the recovery of the island’s natural habitats through reforestation and monitoring programs. “It is amazing to see the support of travelers,” said Lloveras. “Even those who come for a relaxing vacation can still make a big difference by taking a few hours out of their day to volunteer with us at Para la Naturaleza or one of the several other organizations helping our islands recover."

Gisselle didn’t know what to expect when she headed to the island to visit family in July. To her relief, the neighborhood she grew up in, in the historic capital of San Juan, had recovered. Most of the homes were of cement and had withstood the worst of it. Other parts of the islands hadn’t fared so well.

For Gisselle, who grew up in San Juan, hurricanes are just part of life. She recalls her parents would stock up on supplies, board up the house and check on the neighbors before the storm would hit. Their rock-solid cement home was far enough from the coast and yet not up in the mountains, where much of the damage hit, so it withstood many storms. Afterwards it would take a while, but people would take care of each other, and life would return to normal. 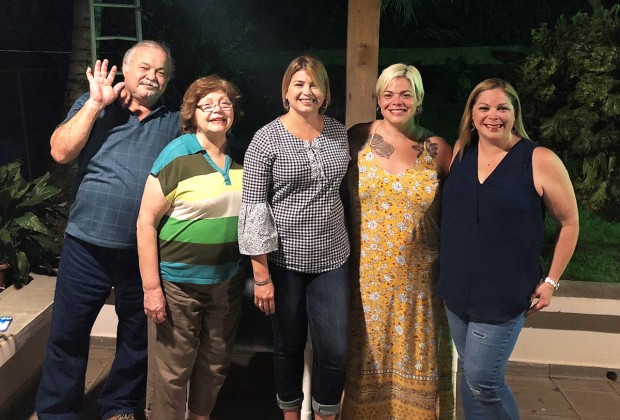 In July she headed to the island with her sisters to check up on her family and spend some quality time with them, and they followed their tradition and headed to the beach. This time they headed south, going to the beaches in Ponce, around Peñuelas; then they went to the North Coast, where the rough waves of the Atlantic make for some especially dramatic coastlines. There they went to Manatí and to the spectacular cove known as Mar Chiquita, a crescent-shaped beach protected from the crashing waves of the Atlantic by a limestone wall.

“Overall if someone comes to visit the island as a tourist, you would still find good customer service, great places to eat, many activities to do and views to be seen,” she said. “The areas that are most dear to our tourists – the hotels, the beaches – those areas are pretty well controlled, with good safety measures, the same as before.”

She did find the street lights out in some neighborhoods, and even some traffic lights – but those were in areas where tourists would probably not venture, she said.

“There are all the usual grocery stores and malls; you can definitely tell there’s some infrastructure that needs to be fixed up, it’s just a matter of time.”

San Juan, the island’s colonial capital city, is as charming and atmospheric as it ever was, with its cobblestone streets, antique Spanish architecture and cafés, restaurants and boutiques. The nightlife that gave rise to Ricky Martin still offers visitors a taste of the Vida Loca. The local culinary scene is as rico as ever, as well, and it can be hard to choose – which is why the Old San Juan Food Tours have become so popular, giving a taste of the culture along with each bite. 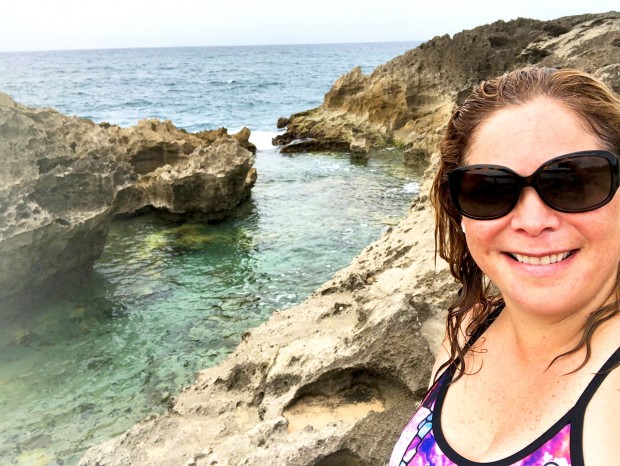 One way to support the Puerto Rican renaissance is by seeking out up-and-coming chefs and enjoying their offerings. A whole generation of young entrepreneurs is betting on starting restaurant businesses, hoping to contribute to the local economy and food system post-hurricane. Some are working with passion and creativity to resurrect pre-industrial local food traditions and a farm-to-table market, while others are striving to grow a fledgling sustainable agriculture movement.

Another way is to support the island’s vibrant arts community, which you’ll find in galleries and performances everywhere – from grassroots street art and community theater to the finesse of Broadway. It’s an arts community that has shown extraordinary resilience in the face of economic and environmental tragedy, as Shirine Saad writes in Vulture. If the brilliance of the Mercado Caribeño Art Fair is any indication, this is one aspect of Puerto Rican culture that will not be defeated.

For those who would like to go all-in and dedicate a vacation to helping Puerto Rico rebuild, the rewards – and the options – are many. Just a few of the many organizations that have sponsored volunteer opportunities include All Hands and Hearts, Habitat for Humanity, Jubilee USA, Team Rubicon and Catholics Care. Go Overseas has put together a directory of volunteer and service opportunities in Puerto Rico. 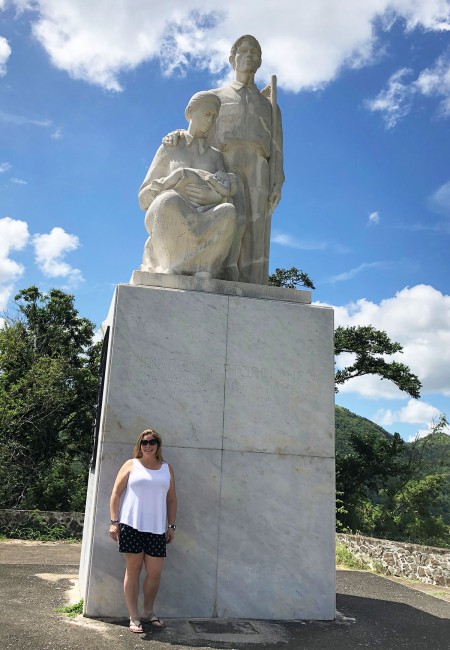 But it’s not only homes for humans that are in need of rebuilding. Puerto Rico is home to the only tropical rainforest in North America – El Yunque. Tragically, following the devastating impact of the hurricanes last fall, an estimated 480 million trees were destroyed, effectively deforesting the island and endangering many of its endemic species. The storm toppled or stripped bare nearly a third of the island’s trees.

Para la Naturaleza offers a number of volunteer activities year-round, free of charge and perfect for families, solo travelers and tour groups. These programs enable travelers to experience the natural beauty of the island while also getting involved and working hands-on to aid in hurricane recovery. A couple of the activities include:

Sowing of native trees (Cabezas de San Juan, Fajardo): Endemic and native trees are better adapted to the tropical climate of the islands, and are more resistant to the impact of hurricanes and droughts. Accompany PLN staff in planting native trees in carefully selected spots.

Nursery maintenance (Nursery of Río Piedras, San Juan): PLN’s goal is to plant 775,000 endemic and native trees in the next five years. By participating in these projects, you help the organization take care of the new trees, while learning about the best reforestation practices. A full list and signup can be found here.

Regardless of your interests, Puerto Rico is sure to offer something that will engage you, entertain you, and quite possibly, teach you something new. As Lin-Manuel Miranda tweeted recently, “No shortage of bad news. But also no shortage of ways to do some good.”