You can go to college again 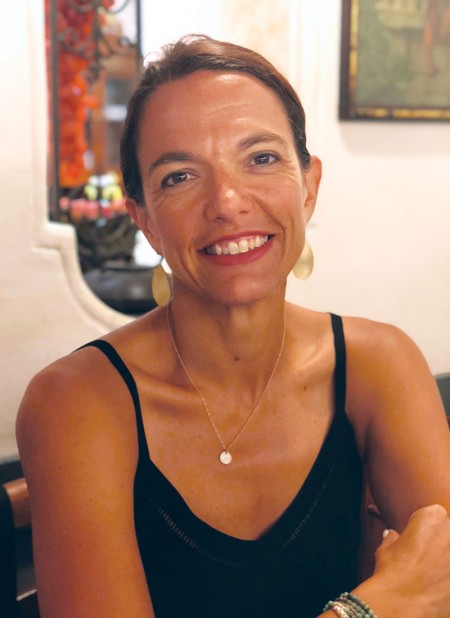 Some people go to college later in life because they didn’t have the opportunity before. Others go back to finish. Some go for a degree to help them in their careers, others to change careers entirely. Some go for fun.

Georgia Polley was always embarrassed she had dropped out of college in her sophomore year. “I was a terrible student, even in high school, and I had no idea what I wanted to do,” she remembers. “I just wasn’t ready to be off at school.”

After living on her own, working as a waitress, she decided, in her mid-20s, to go back. This time, though she was working as well as going to school, she graduated magna cum laude with a bachelors in business administration (BBA) in accounting from the University of Houston. “This time, I knew what I had to do and I had rules for myself,” she said. One was to always go to class, which was not a rule she had followed at 18. Indeed, this go-round, she almost cancelled her first date with her future husband when it looked like it would conflict with her finite math class.

Deborah Stedman had been the first in her family to go to college. “I was practical. I got through school as quickly as I could and majored in business,” she says. She went on to get an MBA at night while working.

At 30, though, she decided to do what she had always wanted: become a doctor. She spent the next four years getting up at 4 a.m. to study before work, taking the prerequisites she’d need to apply to medical school: biology, chemistry, biochemistry, physics and organic chemistry. She took the 7½-hour Medical College Admission Test (MCAT). And that was all just to apply.

At age 34, she quit her job, moved to San Antonio and started medical school at The University of Texas, San Antonio, living on loans to do it. After that, came a year of internship, a five-year residency and a yearlong fellowship. “Fifteen years later, here I am,” she says with a laugh. She became a radiologist at age 44.

Tina Reynolds had gotten her bachelors in 1992 and a master’s right after, in 1995. Fast-forward to 2010, when she was living with her husband Andrew in New Orleans, working as a development officer for Tulane University. Andrew’s company posted him to Rio de Janeiro. At the same time, Tulane began offering some online classes for its masters program in public health, an area Tina had been interested in since she had worked for the World Health Organization in the late ’90s while living in China.

“It just all came together. Tulane introduced the online classes, we had the financial means, and I could stay in New Orleans,” she says. While she took half her classes online while living in Brazil, she also took classes in New Orleans for eight months.

Technology had changed the classroom experience, she found. “First day of class, I pulled out my pen and notepad – and everyone else pulled out their computers,” she remembers. Tina had no problem taking online classes, though. “Online lectures have a rewind button, which I loved,” she says, though she admits, even for the online lectures, she still took notes by hand.

There were some minor bumps in the road. “Whoo, the GRE,” Tina remembers, “that was horrible.” The Graduate Record Examination is the standardized test many graduate schools require for admission. It includes math. “I hadn’t done any math for decades,” says Tina.

And there was more math to come. She had to take a course on bio-statistics. “That professor came to know me,” she says. “I was always at his office hours with questions.”

When it comes to struggling with difficult class material, Tina, like many people who go back to school later in life, find their maturity helps a lot. “I was there by choice, I knew exactly what I wanted, and I was completely focused,” she says.

Kelli Sullivan, a self-described “soccer mom,” decided to apply to the four-year master of liberal studies (MLS) program at Rice University when her daughter started high school at St. Agnes. The Rice program is part-time; students take one class a term, one evening a week, it is designed for older students with jobs and responsibilities, and those students are there for the joy of it. None of this, however, means the program is easy. The application process alone requires three research papers, three to five pages each. (The GRE, however, is not required.)

“Going through the application process, some people self-select out,” admits Rebecca Sharp Sanchez, administrative director for the program.

“There’s a lot of reading,” says Kelli. In addition, the classes, in the humanities, the social sciences and the natural sciences, require papers, presentations and sometimes exams. The program then culminates in a “capstone” research project, usually a 40- to 60-page piece of writing and a presentation. 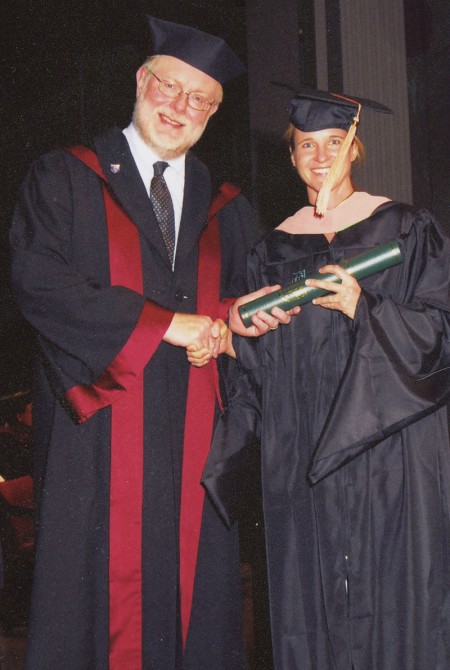 MASTERING CHALLENGES To get her masters in public health, Tina Reynolds, shown in 2010 shaking hands with Pierre Buekens, then dean of the school of public health at Tulane University, split her time between Brazil and New Orleans for two years, learned to speak Portuguese and powered through classes in math.

So, if you do decide to go back, what’s involved?

It depends on what you go back for. These are plenty of options in Houston. Some people, of course, take classes here and there, as they are interested in them, without a plan to use them for credit toward a degree, by, for example, taking a class at Houston Community College (although those can be used for credit), at Rice University’s Glasscock School of Continuing Studies or through programs such as Houston’s Inprint Writers Workshops.

Georgia did not need to be embarrassed to be going back to finish her bachelors. Plenty of people end up doing that, or not. According to the National Center for Education Statistics, overall, about 40 percent of all first-time, full-time undergraduates have not graduated six years later. Indeed, the stereotypical financially dependent 18- to 21-year-old undergrad living in a dorm is decidedly not typical. According to a recent National Public Radio (NPR) report, almost 74 percent of all undergrads are “nontraditional,” with one in every five being 30 years old or older. According to Mardell Maxwell, executive director of admissions at the University of Houston, about 15 percent of all that university’s new undergrads last year were “nontraditional age.”

Plenty of people go back for graduate degrees, sometimes to programs designed particularly for older students with responsibilities. Rice University’s Jones Graduate School of Business, for example, offers a number of different masters of business administration (MBA) programs. In addition to the full-time option, which tends to attract younger students, it offers programs held on the weekends and in the evenings, and those students tend to be in their 30s. It even offers an online MBA, which is particularly popular with active-duty military stationed all over the world and people working in unusual locations, such as on oil rigs in the gulf.

Masters of liberal studies programs have become more common over the years, with about 80 of them currently offered around the country, two of them in Houston: the program at Rice, which was founded in 2005, and another at the University of St. Thomas. While some of the Rice MLS students are younger, students tend to be in their late 40s and early 50s, according to Rebecca Sharp Sanchez. There is also currently an 80-year-old student in the program.

Don’t be afraid to be older than the other students or even the teacher, though it can lead to “some interesting dynamics,” Deborah Stedman says. “You also have some advantages and life skills, like being able to get along with people,” she points out, adding she never felt discriminated against in medical school and residency for being older. “It’s the people who look younger whom the patients question,” she says.

“Personally, I think having the worldview of a 54 year old in a class of 18 year olds enriches the experience for all,” says University of Houston’s Maxwell.

“If you’re concerned about how you’ll do in class, maybe start slowly, taking one or two classes that are just interesting to you,” advises Georgia. “Things will eventually snowball.”

Taking classes at the local community college can also be a way “to repair an academic record,” Maxwell says; it gives the next schools you apply to fresh performance information to see. It is also a good way to brush up on subjects you haven’t thought about for a while and possibly get some requirements out of the way before you go all-in.

But, say these students who have gone back, you should do it.

Tina found getting her masters in public health to be “tremendously fulfilling.” She even learned Portuguese in order to do her practicum in Brazil. “It was very exciting. I was living my dream,” she says.

Deborah, though she gave up a decade of income to train as a doctor, has no regrets. “I tell my residents that that worst day in radiology and medicine is better than the best day at a job I wasn’t excited about,” she says. “Follow your heart.”