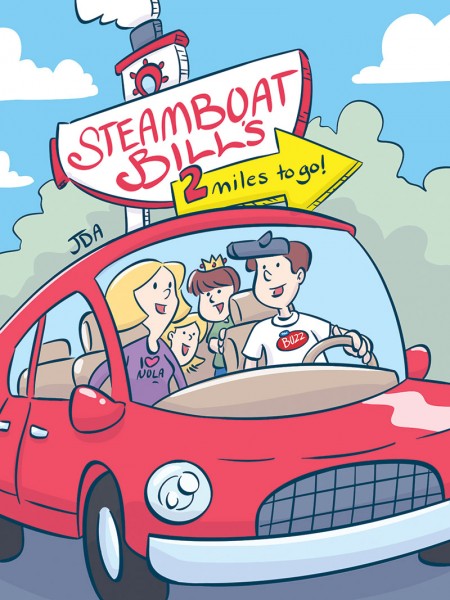 Our neighbors to the east might be just a few hours’ drive away, but that short distance belies the cultural sea between Texas and Louisiana. Crossing the border reveals another world of Cajun and Creole history and food, festivals (over 400 of them) and lots of laissez les bon temps rouler. It’s no wonder the state is called “The Festival Capital of America.”

Buzz residents Lisa Ganucheau, a Baton Rouge native, and her husband Tom, from New Orleans, both graduated from LSU and met at Loyola University New Orleans College of Law before moving to Houston. They say, “There’s always a reason to be celebrating in Louisiana. You finish Christmas and it’s Twelfth Night, and then Mardi Gras, and then Easter.”

We asked them to suggest some off-the-beaten-path trips for Houstonians to add to our schedules this year.

While Mardi Gras is the first thing that comes to mind, it’s more than the New Orleans scene that most of us picture. “Every little town does its own version,” Lisa says. Mamou Mardi Gras in the heart of Cajun Country is one of the best-known, with a Fat Tuesday Courir de Mardi Gras, which sees local men of all ages ride masked on horseback through the town, dismounting to chase chickens and scavenge homes for ingredients for a celebratory, post-ride gumbo. Eunice, just south of Mamou, also does a four-day, true Cajun Mardi Gras with a truck parade, giant king cake and zydeco performances.

Unrelated to Mardi Gras but also in Mamou, don’t miss a Saturday at Fred’s Lounge (337-468-5411). There, Cajun music and dancing start every Saturday at 9 a.m. and continue through the afternoon.

Next up: St. Patrick’s Day in Baton Rouge. “My mother’s family is part of the large Irish population there and participated for years in the huge parade that goes right through the heart of the city,” Lisa says. The Wearin’ of the Green Parade is a family affair with floats and decorated trucks – but it’s not entirely low-key. “It’s almost like a mini-Mardi Gras,” Lisa says.

“In the spring, Jazz Fest in New Orleans is not to be missed,” Lisa says. “There is always incredible entertainment, all in one venue. And the food is fabulous.” Lisa, like so many other Jazz Fest fans, especially likes the crawfish bread, or “pistolettes” – fried bread stuffed with melty cheese and crawfish.

While they didn’t date at LSU, the Ganucheaus rank games in Tiger Stadium as one of the top experiences in Louisiana. “It’s exhilarating, unlike any other football game,” Lisa says. “It’s a huge party!”

Christmastime brings celebrations worth a drive. “On Christmas Eve, south of Baton Rouge on the banks of the Mississippi, they light bonfires and tell all the little children that the fires are lighting the way for Papa Noel to find them and bring their gifts,” Lisa says. “It’s stunningly beautiful and captivating.” The best views of the dozens of 20-foot bonfires are said to be around the towns of Gramercy, Lutcher and Paulina. As a prelude to the Christmas Eve happenings, a Festival of the Bonfires is held in Lutcher mid-December, with music, food and a single bonfire lighting each night.

Also at Christmastime, Natchitoches, Louisiana’s oldest city and the place where the movie Steel Magnolias was filmed, decks its streets in hundreds of thousands of lights. Their Christmas festival includes 18th century Christmas reenactments, period merchants, candlelight tours of historic homes and a Festival of Lights Parade.

Christmas flows into another Mardi Gras with Twelfth Night, the celebration that begins 12 days after Christmas, kicking off the Mardi Gras season (the time of debauchery leading up to Lent). In Lake Charles, there’s a Twelfth Night Parade Extravaganza, where the past year’s Mardi Gras royalty waves goodbye – in glittering costume – and greets the new season with zydeco music, king cake and gumbo.

All year, Lisa says, “there are so many lovely places up and down the [Mississippi] river that are historic with plantations between New Orleans and Baton Rouge.” She says The Myrtles in St. Francisville – now a bed-and-breakfast said to be haunted – is in one of the most beautiful parts of Louisiana.

For the drive, she says, “one place we always recommend because it’s so much fun is Steamboat Bill’s.” With crawfish pistolettes, seafood platters and boiled crawfish, it’s the perfect stop in Lake Charles, either on the way into Louisiana or on the way home.