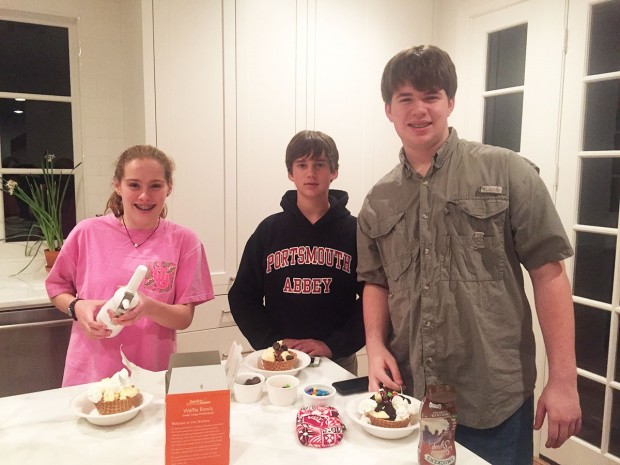 This Sunday, Feb.  3 at 3 p.m. CST, more than 100 million Americans will tune in to the 53rd Super Bowl, which takes place in Atlanta this year. Whether you’re cheering for the New England Patriots, the Los Angeles Rams or the funny commercials, here are some game plans to keep your Super Bowl party touchdown-worthy.

Elizabeth Groff shared, “Years ago the husbands started a tradition of having a ‘guys only’ Super Bowl watching party. The wives were left with all the kids so we decided to start our own fun celebration, which is now known as the ‘Super Bowl Sundae’ party. Kids (big and small) scoop up boats of ice cream and then hit all the toppings stations to create amazing ice cream sundaes.”

Super Bowl theme parties run in Elizabeth’s blood. She recalls, “I have very fond memories of my parents throwing a ‘Souper’ Bowl party and everyone bringing soup. We had a giant stove with lots of burners and I can still see my dad stirring about eight giant pots of soup.”

During the early 2000s the West U Methodist Cornerstone Sunday School had an annual Super Bowl Sunday party. Most of the class included young parents who had preschool-aged children. Everyone would chip in to have two to three babysitters wrangling about 20 kids upstairs while the parents were having fun downstairs eating, drinking and dancing and singing to halftime show performers like Prince, Tom Petty and Bruce Springsteen.

The year Kevin and Lucy Leonard hosted the party in their Bellaire home, their preschool-aged daughter Audrey was in a bit of shock after having that many kids descend upon the house. Lucy laughed, “Audrey was an only child at the time and was traumatized after her toys were moved by all the kids.” Dad Kevin had to share Audrey’s very honest feelings: “She told us to never have another Super Bowl party!”

One over-zealous Super Bowl party guest shared this sage advice, “One year I tried to hit four different parties…one per quarter. That wasn’t a great idea. Just when I got settled at one party, it was time to move to the next one.”

Another fan shared that she has more fun watching the more friendly and furry Bowl Game every year…the Puppy Bowl, which airs on Animal Planet, Sunday, 2 p.m. CST.

Even though their favorite teams haven’t made it to the Super Bowl the past few years, Jan and Greg Garner still love football and a good theme party, so they’ve gotten creative in their Super Party clothing choices. For last year’s Philadelphia Eagles vs. New England Patriots Super Bowl, they wore rock band t-shirts inspired by those teams. Greg wore an “Eagles” t-shirt for Philadelphia and Jan rocked her “Boston” t-shirt for the Patriots. This year Jan will give an encore performance with her “Boston” shirt and for Los Angeles, Greg plans on digging up a “Ram”-ones t-shirt!”

Even if your favorite gridiron giants didn’t make it to the big show, it’s totally acceptable to still wear attire representing your team.  Just tell people you’re preparing for next year’s Super Bowl lineup! Another fun option is to buy a referee shirt at a sporting goods store and just hope no one starts yelling at you. 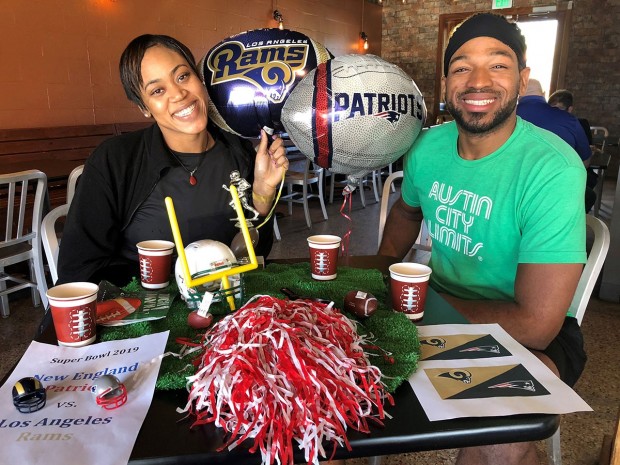 Sarah Wade and Adrian Love (left to right) getting fired up to cheer on the Patriots and Rams for Super Bowl LIII (53).

Another great way to get your guests cheering is creative food. You can find overflowing stadium amounts of online recipes for making food into the shapes of footballs, helmets, etc. Here are a few of my ideas for theme foods to highlight this year’s Super Bowl cities/mascots. Be sure to put out signs so people can enjoy the creativity!

And, if you want to skip the cooking – and spend for a good cause – the Bellaire Optimist Club is hosting their annual Super Bowl brisket fundraiser. The club will be cooking and selling whole racks of pork ribs, beef briskets, and pork butts on Saturday, Feb. 2 and Sunday, Feb. 3.

If you want to create some fun energy at your Super Bowl party, you want a guest or host like Bellaire’s Michael Grant. Michael’s the guy who helps run the games. He finds the games, he prints out handouts for the games, he passes out the sheets, he collects the money and hands out the winnings. Michael shares, “I enjoy coordinating the games during the Super Bowl. It’s just fun to have a general theme that everyone can relate to and cheer for even if they don’t understand football very well. It gets people to connect.”

Michael continued, “With games like Squares you can just use names and win ‘bragging rights’ but it is also fun to sell the squares for a $1 each and people can win some fun money at the end of each quarter.”

Here are some ideas of games to play or activities to have on hand during your Super Bowl party:

Also, have your dance moves ready for this year’s halftime show featuring Maroon 5, Big Boi and Houston’s own Travis Scott.

No matter how you celebrate Super Bowl Sunday, we know it will be Jumbotron-worthy!