Connection and a big love 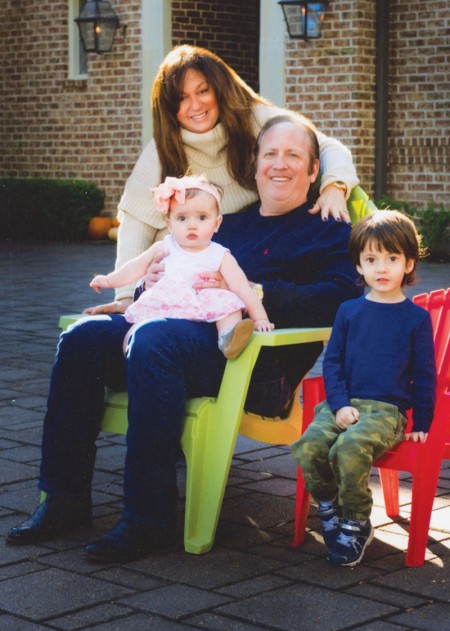 FEELING GRAND Robin Davis, with husband Jordan and grandchildren Charlotte and Max, says she feels different now that she's a grandparent. "Something changes," she says, "like it does when you have kids."

Buzz residents sometimes have a hard time describing what being a grandparent is like. One new grandmother could only say, “It’s different than I expected. It’s better.”

“There is nothing better than grandkids,” declares Dessiree Medrano, grandmother of six, ages 2 to 11, all of whom live within walking distance of her Bellaire home, with another due in May. “The love is so different, so special.”

Robin Davis, who moved from Corpus Christi to Houston about six years ago, has two grandchildren: Max, 4, and Charlotte, 9 months. “It’s like they’re your children,” she says, “just grander.” At grandparents day at Max’s preschool, Robin kept introducing herself as Max’s mother by mistake. “Time just disappears,” says Robin, who is 53. “It’s very weird.”

All babies are cute and delightful, but when they’re your grandbaby, there’s more to it than that. Robin says she feels a profound sense of the connection between generations. “My husband and I look around and think, everybody came from us, they wouldn’t be here without us.”

Researchers say the existence of grandparents is intertwined with being human. We are one of the only animals who live far past their own fertility. One theory, called “the grandmother hypothesis,” is that in ancient human culture, having a grandmother around, gathering food and helping with the babies, increased the chances those babies would survive and have children of their own, passing along the grandmother’s genes. In that way, longevity and, also, the tendency toward “prosocial behavior,” doing things for others, was selected for and passed on. Some even speculate that the tendency for grandparents and other relatives to fall in love with the new baby in the family eventually expanded into the ability to feel empathy and compassion for other people, even when we are not related to them.

Of course, it doesn’t take research to see the grandparent/grandchild relationship can provide benefits to both parties. Grandparents are additional adults and often, though not always, retired, with more time to spend with the children. They are older, hopefully wiser and more patient, with additional knowledge and family lore to share.

Every year, Dessiree sits down and writes a letter to each of her six grandchildren, describing things the child did and thought and said that year. She started when the oldest, Alessandra, now 11, was born. She will give the children their folders of letters when they are older. “Their mothers are busy and aren’t going to remember every single detail. I don’t remember with my daughters,” she says.

Studies have shown that children who have a close relationship with a grandparent are less likely to be depressed and that the relationship can lessen the impact of negatives in the child’s life, such as being bullied.

There are benefits for the grandparent as well. Multiple studies have shown that grandparents, particularly grandmothers, who are somewhat involved in the care of their grandchildren tend to be healthier and happier and score higher on cognitive testing. 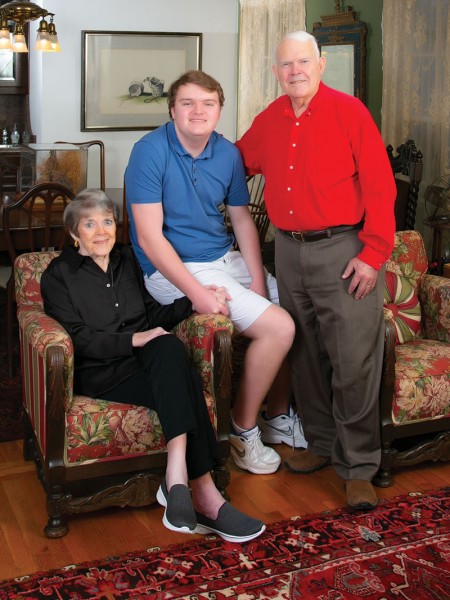 GRAND TIME Max DuBose, center, and his grandparents, Melinda and Robert Tonetti, enjoy each other's company while Max lives with them for his final year of high school. (Photo: lawellphoto.com)

Melinda and Robert Tonetti, 80 and 81 years old, love having their grandson, Max DuBose, a high school senior, live with them for a year. Max moved into his mom’s childhood bedroom at the start of the school year. Max’s family had moved to San Antonio when his dad, Clint DuBose, formerly the head of the middle school at Annunciation Orthodox School (AOS), became head of San Antonio Academy. But Max missed Episcopal High School, where he had always been heavily involved in drama. He asked if he could move back to Houston and live with his grandparents for his last year of high school.

“I said to my parents, ‘Don’t answer now, think about it,’” remembers Max’s mom, Anne DuBose, ‘but within two seconds, they were both saying, ‘Yes, yes, yes!’”

“We get along famously,” reports grandmother Melinda. “He’s such a good kid. He’s keeping us young, I think.”

Every morning, Robert Tonetti wakes Max up for school and they have breakfast together.

On the other side of the age spectrum, Robin Davis’s 4-year-old grandson Max loves to go through her purse because he knows there will be toys and snacks in it for him. “All of a sudden, my purse is a ‘grandma purse,’” says Robin with a laugh.

“When people tell my husband, ‘Desi looks great,’” says Dessiree Medrano, “he always says, ‘It’s the grandchildren keeping her young.’ They are my joy.”

Grandparenting has spawned its own genre of books. They range from general how-tos to books focused on specific topics, such as grandparents who are raising their grandchildren (in what are termed “grand families”), advice on interacting with your grandchildren on social media and how to wow them with magic tricks.

A selection of recent titles:

Becoming Grandma: The Joys and Science of the New Grandparenting by Lesley Stahl

Unconditional Love: A Guide to Navigating the Joys and Challenges of Being a Grandparent Today by Jane Isay

I Love You from the Edges: Lessons from Raising Grandchildren by Karen Best Wright

Nanaville: Adventures in Grandparenting by Anna Quindlen To be published in April.

Stuff Every Grandmother Should Know by Joyce Eisenberg and Ellen Scolnic To be published in February.

Being a Proactive Grandfather by Richard Eyre

Good to Be Grand: Making the Most of Your Grandchild’s First Year by Cheryl Harbour

Being a Grandparent: Just Like Being a Parent … Only Different by Ray Guarendi

A sampling of what’s out there:

Grandfamilies.org, for grandparents raising their grandchildren

Grand, a magazine for grandparents

Grandparents Autism Network, an organization for grandparents whose grands have autism