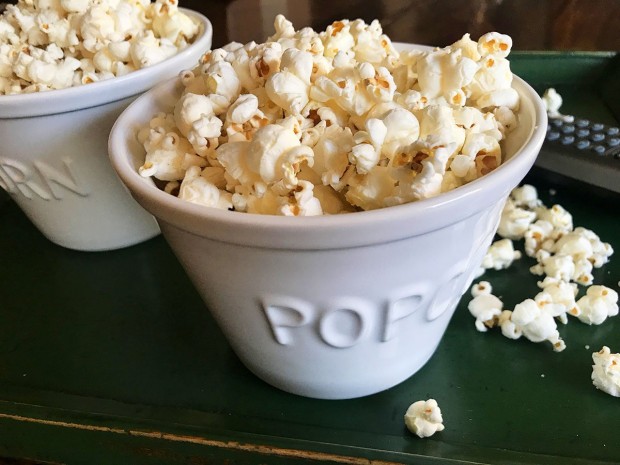 Andria Frankfort creates this Oscar-worthy Truffle Parmesan Popcorn, based on Laurence Bragg's method of popping popcorn. Laurence suggests popping kernels in coconut oil on the stovetop. This flavorful snack is a winner.

Anyone who knows me well knows I have a thing with popcorn.

Ever since I wrote the January 2013 story A Healthy Start, I’ve been just a little bit obsessed with Laurence Bragg’s method of popping popcorn. She advised us all to ditch the microwave bags in favor of kernels popped in coconut oil, on the stovetop. For me, that was an epiphany moment.

Since then, I have been addicted to popcorn popped in coconut oil. I upped the ante by sprinkling truffle salt all over the popped kernels. Then I started adding grated parmesan to the truffle popcorn, and that’s when I became a popcorn freak.

I will pop popcorn for you anytime. I send bags of it to my child in college. And if we’re going to the movies, watch out - avert your eyes if you have to - because I’m bringing popcorn from home. For a while, I was making individual brown paper bags (just like getting it from the theater!) with people’s names written on them (I understand some people can’t stand the truffle – they get salt and pepper). It’s your very own customized movie popcorn!

I’ll admit that I’ve gotten more than a little flak about my popcorn obsession. Especially about the part where I sneak my own – and everyone else’s – into the movies. But it’s truffle parmesan. And the coconut oil adds just the right amount of “buttery” without the butter. And my younger daughter thinks I need to sell it.

Make some for Sunday’s Academy Awards. You, too, will be bringing it into the movie theater soon enough.

Cover the pot, and wait until you hear popping. When you do, reduce the heat a little bit and begin shaking the pot, with the lid slightly ajar (letting out a little steam makes crispier popcorn), until the popping just about stops. Remove from the heat immediately.

Pour the popcorn into a large bowl and, while it is warm, sprinkle the truffle salt over. Stir to coat the kernels, then add the grated parmesan.

Ziploc baggies work great for smuggling this yumminess into the movies!