Screen time for young ones 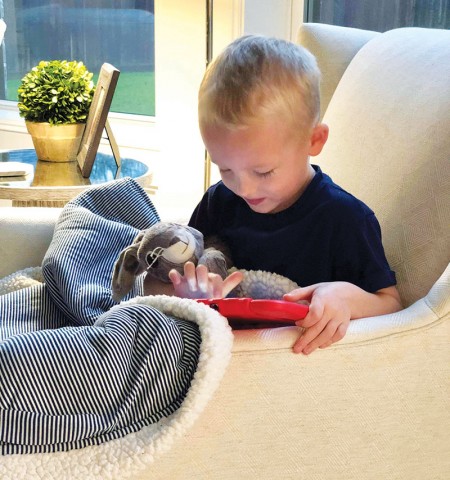 KIDS AND TECH Brady Edington, 5, earns his 30 minutes-per-day of screen time on the weekends with good behavior.

In 1999, the American Academy of Pediatrics issued a statement saying that children under the age of 2 should not be spending any time at all in front of screens.

Since then, technology has evolved and plays an even bigger role in most aspects of our lives – including parenting.

How should a parent navigate screen time with their young children? After all, everyone loves Sesame Street, and it has been around for more than 50 years. But, there’s more than just television out there today – there are tablets, phones and computers with games, Netflix, YouTube and more every day. Electronics have made our lives as parents easier, but also more difficult.

I listened to a podcast (via technology, of course) called The Influence of Media on Young Children’s Development, on the non-profit organization Zero to Three website (zerotothree.org), given by Dr. Ellen Wartella, a professor of communications and psychology at Northwestern University.

Dr. Wartella has researched children and media for over 30 years. In the podcast, she talks about the impact of educational media on young children and how parents can use recent research to help them make screen-time decisions.

She says digital media can be educational for preschool children, especially when the content contains a storyline the child can follow. Research is still ongoing for babies, but she notes that babies often show they are understanding what is going on in videos by expressing their emotions and laughing, which are all good signs.

“If your child is into animals, then find video content that uses language to teach children about animals. That is what they’ll be engaged by,” she said.

Teacher Molly Edington says her kids, Claire, 4, and Brady, 5, didn’t watch much television when they were under the age of 2, except for the cable channel “Baby TV,” a channel with content geared toward babies (introducing colors, sounds, counting, farm animals, etc.).

She did make exceptions, letting them have screen time at medical appointments “because I can’t handle all the germs at doctors’ offices, and I thought letting them watch something on my phone would keep them from touching every square inch of the tiny, germy patient room,” she said. She used an iTunes app on her phone called Peekaboo Barn that plays toddler-friendly videos.

She says now that they are a little older, they must earn their screen time with good behavior. Brady has been an early riser, pre-dawn, since he was a baby. “They only do screen time on weekend mornings. They have to stay in their room until 7 a.m. If they wake us up, no iPad,” said Molly. They also watch shows on PBS and Netflix. If the screen time gets to be too much, Molly plays music on their household surround sound.

Sometimes, unmonitored technology and tots can make for unforgettable moments, such as when a friend of mine let her daughter have free rein on selecting videos on her iPhone while she grocery shopped for a big party.

She still blushes when she tells the story. “I really needed her to be distracted for a minute while I shopped, so I let her have my phone and opened YouTube.” Up and down the aisles of Trader Joe’s they went, phone in tiny hand.

All of the sudden, she heard foul language spewing from her iPhone, with the volume turned way up. A man pushing his cart up the aisle started to snicker. She heard it again, “#$%&! you, Dora!” She grabbed the phone. It was a parody video of Dora the Explorer, the popular Nickelodeon cartoon. Her daughter had clicked and clicked and eventually landed on some not-for-kids spoof videos.