"Reduce" is the most important 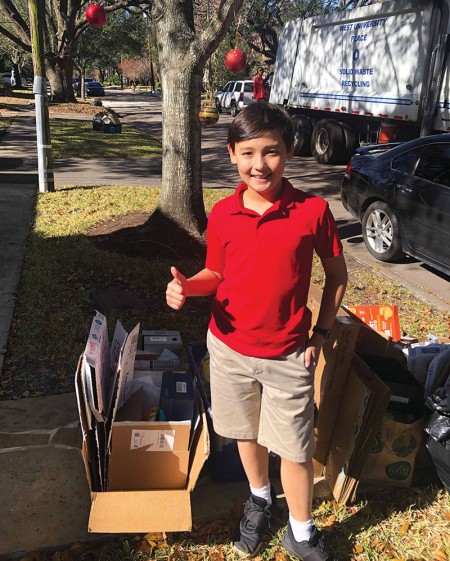 REDUCE, REUSE, RECYCLE Thomas Wu, 11, works with his parents to help their family do better in waste reduction. He helps his dad take the recyclables out every Friday morning.

Thomas Wu has been thinking a lot about waste. A few months ago, the St. Anne Catholic School sixth grader was at Barnaby’s Café and was puzzled to see a paper straw in his drink. He asked his mother, Jennifer, about it and learned that the restaurant had switched to paper to cut down on the tremendous volume of single-use plastic that has been flowing into our landfills, waterways and oceans. Not only that, he was pleased to learn that the restaurant is using compostable plastic bags for takeout.

He’d been thinking about the plastic-pollution crisis, talking about it at school with his friends. “I’m worried we’re not going to have any room for anything else because it’s all going to be so piled up with trash – because people aren’t doing anything,” he said.

But it was the paper straw at Barnaby’s that made him realize that in fact, people are starting to do something. It started a conversation about waste that his family and friends are having to this day, said Jennifer, along with an ongoing effort to continually reduce their ecological footprint.

The Wus have been recycling for years – but now realize that recycling is not enough. Especially since the Chinese stopped accepting U.S. recyclables for processing, the market for used plastic has gone into a tailspin, and much of what was once baled up and sent abroad is now ending up in our landfills.

That’s why, in the adage of the Three Rs – Reduce, Reuse, Recycle – it’s critical they are observed in that order, says Becky Luman of Healthy Tweaks, a Houston-based organization dedicated to helping people reduce their environmental footprint.

“The triangle is not recycle, reduce, reuse – recycling is the lowest rung on the ladder,” says Becky. “So when people lead with recycling, I try to figure out how to change the conversation.”

For Jennifer, a physician, the plastic-pollution crisis captured her attention when she saw a shocking image of a stork trapped in a plastic bag, and then other photos of animals with their bellies full of plastic – part of a National Geographic series, Planet or Plastic?, which began waking people up to the scale of the problem.

“I think the other thing that’s happening is that we are all paying attention to global warming – and all the reports that have come out in the past year and how that maybe contributed to Harvey being such a bad storm in Houston,” she said.

To Jennifer, the connection between climate change and the plastic-pollution crisis is clear.

Becky was fortunate to have parents who loved nature. She grew up to be a civil engineer, working with companies to reduce waste and prevent pollution, and an environmental consultant, working with schools and families to lower their impact on the Earth, and save money by doing so. And like Jennifer, she realized that recycling wasn’t enough.

“People tend to pat themselves on the back for recycling, but what we really need to do is consider the whole life cycle of a product,” she said. “While you can buy a whole case of plastic water bottles for $3.50 – where is that plastic coming from, and where is it going?”

Following the trail of a single plastic bottle reveals the violent impacts on communities at the source – high rates of cancer, asthma and other ailments in areas around petroleum refineries and the chemical plants that produce the plastics, for example – and then at the end point, often a waterway. The Great Pacific Garbage Patch, for example, has now grown to twice the size of Texas, and that’s only one of at least five vast floating gyres that are killing wildlife in our oceans. Scientists estimate that at the current rate, the oceans will hold more plastic than fish by the year 2050

Like many families, the Wus and the Lumans have been looking for ways to turn the tide of trash. They’ve switched to reusable water bottles and food containers; they’ve eliminated plastic straws and carry reusable grocery bags. They plan to take food containers with them for their takeout. And they plan to write to city officials to encourage them to implement curbside composting programs and a plastic-bag ban like many cities have.

For her part, Becky plans to educate others every chance she gets. “I know parents care about their kids and want to leave the Earth in a better state for them,” she says.

To help you along your path, Buzz-resident Sandy Spears, a writer, has put together an excellent resource on her blog, 350 Houston: “Reduce Your Landfill and Recycling Waste by 80%.”