Couldn’t we all just die laughing? 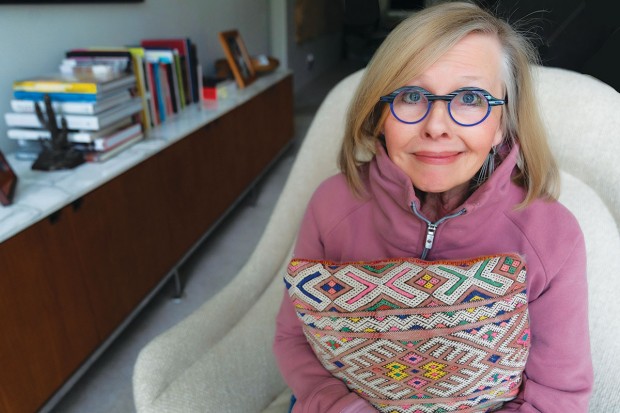 ALL THE SIDES Cindy Gabriel looks at the upsides to the downsides of life. (Photo: Aimee McCrory)

While everyone dies, it’s not very high on my “to do” list. Birth is another thing. Just last month I was basking in ecstasy over the birth of my first grandson. “Expecting” is what we say when babies are coming. But when death approaches, the word is “shocked.”

In the average lifetime, we will experience approximately 50 deaths. You’d think with all of the occurrences that we wouldn’t be so surprised every time it happens.

In the November Buzz, I mentioned a string of my own losses. After experiencing the deaths of three parents within 72 days, then two years later my husband, I’m surprised I wasn’t a crime suspect.

I always thought my two grandmothers had their own interesting ways of approaching the subject. Mimmie and Inez each lived well into their 80s.

One night, Inez called my father in the middle of the night, and with no particular change in inflection, she said, “Clymer Jr., I think I’m dying, and I just want you to know what a wonderful son you have been….”

She would have waxed on, but my father interrupted with the usual references to hospitals, ambulances, etc., to which my grandmother sighed, “Well, I haven’t done my hair.”

Inez had very curly hair that, in her estimation, required a good hour of maintenance. We were always waiting on her to do her hair.

They did manage to get her to the hospital, and later that morning I found her in the emergency room awaiting an EKG. Inez looked at me and said, “What do you wear to an EKG?” She always said wear as if it were two syllables, as in “wa-yah.” She thought my generation had totally lost its way in the fashion department.

She lamented that green scrubs weren’t nearly as flattering on nurses as white dresses with waist lines and stiff white hats. It was ironic she would die in a place she had rarely been her whole life.

She lingered a few days, finally passing with my dad at her side. They spoke of Charlotte, a cousin my age, who was killed in a car accident when we were both 18.

Neither of these grandmothers’ cheeriness was an indicator that nothing “bad” ever happened to them. Inez was more on the warm-fuzzy side, while Mimmie was a feisty, skinny, get-after-it kind of person.

Dr. Denton Cooley had to patch Mimmie together once after a major heart attack. From there, she attacked life another 20 years with exercise, gardening and travel, along with my equally healthy grandfather, in a marriage of more than 65 years.

Between her heart attack, my mother’s death at 54, and finally the slow and painful bone cancer death of my grandfather, she chirped and chugged along.

She used to refer to life as “this veil of tears,” in her smirky, perky way, that sounded, sort of, okay. She only brought death up to show me how her bank CDs were doing. I later learned that she thought I had not expressed appropriate gratitude on the subject of my inheritance. I guess I was supposed to jump up and down and ask her if she was feeling any pangs. The truth is they were Depression-era savers who worked hard with little education and were mighty proud of their CDs.

After my grandfather died, she put the house on the market, sold it, hired movers and called from the nursing home in Nacogdoches into which she had checked herself. This was one low-maintenance octogenarian.

Her daughter, my mother, was diagnosed with terminal cancer at 52, just as my daughter, Laura, her first grandchild, was born. Mom lived long enough for 2-year-old Laura to run in and snuggle with her under the covers while I read lines from Erma Bombeck, the humorist of her generation who helped make being a housewife in the ’60s and ’70s bearable.

Coincidentally, about that time, I was working at a Houston radio station. Erma Bombeck was coming into town to promote her latest book, I Want to Grow Hair, I Want to Grow Up, I Want to Go to Boise, a compassionately funny book for kids with cancer, where she discovered wit in those kids that matched her own. Her initial reluctance to link cancer with humor dissipated. I recorded an interview with her over the phone, in which I mentioned that her books were furnishing many laugh-out-loud moments for my mother and me as she faced cancer.

When she got to town, I went to her talk and was escorted to the media table where one woman sat quietly with her hands folded. As I introduced myself, she looked at me and said, “Hi, how is your mother?” It was Erma Bombeck, remembering our 2-month-old conversation.

Every now and then, it seems as if a common thread is holding this life and death thing together and all of us together as well. As Morrie Schwartz says in Tuesdays with Morrie, “Once you learn how to die, you learn how to live.”

To accept one and not the other is to deny both.