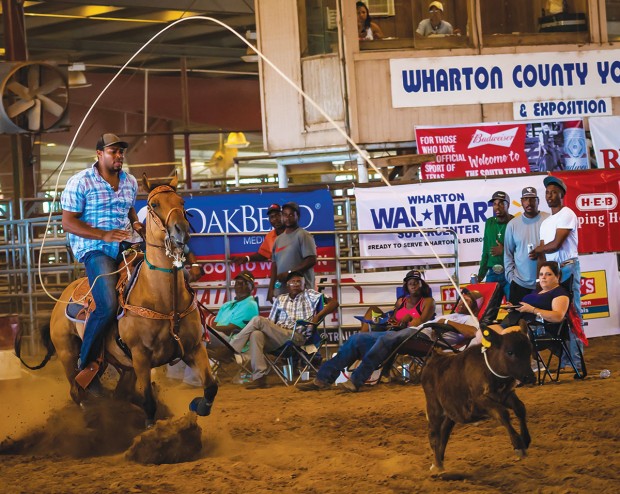 CLEAN THROW A rider and his horse are a good team in a timed calf-roping contest at a small rodeo near Wharton. The rider has thrown the lariat, and the horse has begun to stop, which will pull the calf to a halt. The rider then jumps off and ties the calf’s legs. (Photo: Bob Schwartz)

As the city once again discovers its inner cowboy with the annual celebration of the Houston Livestock Show and Rodeo, Travel Buzz decided to take a look beyond the fanfare. This month we take a deep dive into the very heart of rodeo – through the lens of Bob Schwartz, longtime oilman turned photographer, who has spent five years exploring different kinds of rodeos in Texas and Wyoming.

Bob, who has been taking photos as long as he can remember, used to take his camera with him on business trips in the Far and Middle East. He has photographed subjects from Namibia to Cuba, but since his retirement, he’s been focusing on a subject closer to home. About five years ago he was taking a class with Peter Brown at Rice University, and Brown suggested he take on a project. On his way to the airport, he saw a billboard advertising a Mexican rodeo. An Oklahoma native, Bob moved to Texas in 1961 and had been to many rodeos, but never a Mexican one. He decided to check it out – and other kinds of rodeos, as well. Five years later, he and his camera have followed that billboard into an alternate rodeo universe.

With the fencing of the American West and the industrialization of agriculture, cowboys had to find a new livelihood, and popularizing the competitive riding events that had grown up out on the range over the years was one way to do that. But the West being as segregated as the rest of the country, Hispanic, black and even Native American cowboys ended up developing their own rodeos, as Tracey Owens Patton and Sally Schedlock wrote in Gender, Whiteness and Power in Rodeo. 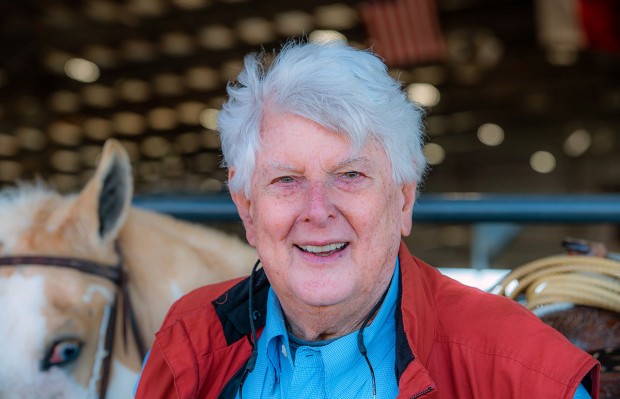 RODEO SHOOTER Bob Schwartz has immersed himself in the world of rodeo for five years, creating a body of photographic work that has shown in various galleries around Houston.

Bob found that those intricate subcultures continue to this day. He also found other lively rodeo subcultures wherever he looked. All of them, he found, had several things in common: They exhibited extraordinary horsemanship, they were passionate about their sport, and they were wonderfully photogenic.

He’s also made a lot of images. One of his favorites — of his friend, black cowboy Daryl Anderson of Egypt, Texas – was just accepted in a competition to be displayed in the Rice Brown Gallery for the upcoming year.

“For people who want to go see something different, some of these small rodeos are really incredible,” he said. He discovered the website rodeosusa.com; within an easy drive of Houston, there are at least 15 small-town rodeos in March and April alone that are sanctioned – and that does not include many small-town, unsanctioned rodeos that don’t show up on the website.

One that he shot recently was a roping event in a small, historically black town south of Houston called Kendleton, just past the town of Wharton. The event was quite the occasion, with hundreds of people, a big barbecue and a fish fry.

Bob knew that black cowboys are neither a new nor an unusual phenomenon, but he was surprised at the extent of the black rodeos that go on almost every weekend within a few hours’ drive of Houston. He learned more about the depth of the tradition when he read the story of Myrtis Dightman, the so-called “Jackie Robinson of rodeo,” in Texas Monthly. The story tells of how the son of an East Texas farmhand broke through the color barriers to be one of the best bullfighters who ever lived. But he was just one of a long line of black cowboys; back in the golden days of Charles Goodnight, Oliver Loving and the vast herds being driven across the Southwest, an estimated one in four cowboys was black, according to historian Kenneth W. Porter. A sizeable number were Latinos and Native Americans, as well. 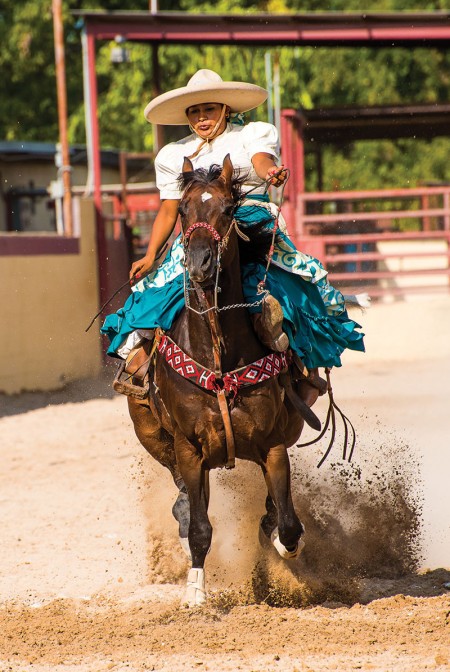 A rider at a charreada in San Antonio wears revolutionary-era dress, in the Mexican charra/charro style. In this event, she rides at full speed and then pulls her horse to a full stop at a marked spot. Speed and form count, as well as how well she centers the stop. (Photo: Bob Schwartz)

Native Americans and Latinos developed their own rodeo circuits, as well. For Mexican-Americans, rodeo has been part of their tradition since the early days of the Spanish conquest. Rodeo traces its roots to the Spanish missions in the American West and the vaqueros, native people who joined the missions and learned to ride and rope and manage the Spanish herds. As settlers moved westward, they adopted many of the practices, the western wear and the terminology of the vaqueros – even the word “rodeo” comes from the Spanish word rodear, or surround – as in roundup.

Bob’s first alternate rodeo immersion was into the world of the charreada, the Hispanic rodeo, still practiced in San Antonio and other Southwestern towns much as it has been in Mexico for generations. The Asociación de Charros de San Antonio, which is more than 67 years old, celebrates four major events each year, including a gala event that coincides with Fiesta San Antonio.

“We sometimes forget the Mexicans learned to ride horses from the Spanish, and some of these horses and some of these riders are just incredible,” said Bob. “The women wear these incredibly beautiful embroidered dresses that are big and ruffled, and they wear these huge hats that flip up in the back.”

The charreada is different in several ways from what Bob jokingly refers to as the “gringo rodeo.” The traditional charro-style dress is one obvious difference; the participation of women is another. In typical American rodeos, he says, the women mainly participate in barrel racing, while in the charreada, the men and women face off in an event that Bob likens to “square dancing on horseback.” The shape of the arena is different, as well; unlike in the typical oval-shaped arena, the Mexican-style lienzo charro is shaped more like a banjo, with some of the events beginning in the “neck” of the banjo and making their way out into the circular ring.

One of his favorite events is the charreada held in conjunction with Fiesta San Antonio (this year, the Day in Old Mexico Charreada will be held on April 21 and 28). “That’s worth seeing, when all the cream of Hispanic society shows up,” he mused. “It’s something to see, the getups – I just enjoy it. I think they’re neat people.”

His most recent show, which was exclusively of Hispanic rodeos, was on display at the Cloister at Christ Church Cathedral, with another image in FotoFest. He also had two on display last year in the Brown Gallery at Rice, to be replaced by his Daryl Anderson photo this year. 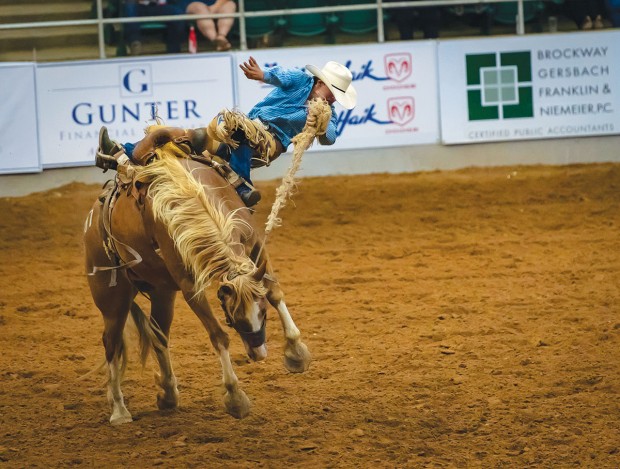 A professional rider competes in a saddle bronc event in a PRCA rodeo in Belton. Riders compete in sanctioned rodeos for prize money and the chance to ride in the National Finals in Las Vegas. (Photo: Bob Schwartz)

Bob’s rodeo rovings have taken him much further afield, as well. Last summer he did a road trip with a couple of buddies through the Texas Panhandle and Colorado all the way to Wyoming. A friend in the tiny town of Dubois, near Yellowstone National Park, got word of Bob’s project and invited him up to photograph their local rodeo.

Every Friday night, from the first of May to the first of October, there’s a rodeo – a combination of young kids and local riders who want to try their hand at it. It’s not a professional rodeo, but it’s good fun – and amazing in its own way, said Bob.

“The lady who runs it, her daughter was competing, and she wanted to ride bulls – and so she did. They’ll let the kids go ride whatever they want, and the horsemanship is amazing,” he said. “These young kids grew up riding.”

The event draws 400 to 500 people each week. “They sell barbecue and beer, and people wander around. There are a lot of dogs that are fun to photograph, and of course the young kids who are going to ride – and beautiful horses.”

The rodeo life has been an eye-opener for Bob, who didn’t expect to find so much culture so close to home. He laughs when he thinks of the trepidation expressed by some who heard about his cultural incursions where often, he’s the only “gringo.” But more than that, it has moved him deeply to be accepted into their lives.

“I just love these people – I love being around them,” he said. “I’ve seen how kids with nothing have carved out lives for themselves. And that’s what this country’s about.”