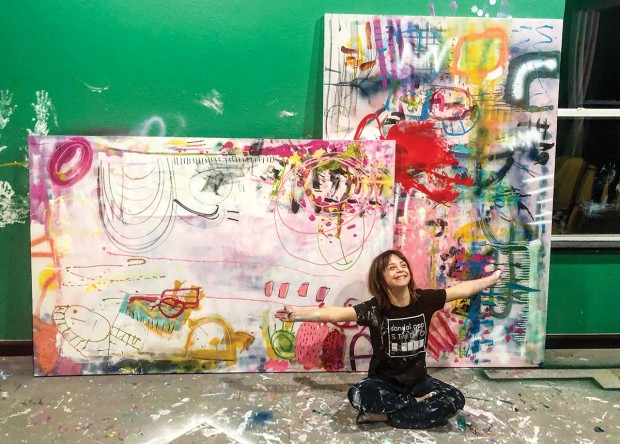 PLEASED Artist Sevy Eicher’s joy is undeniable when she completes each of her oil-on-wood paintings. (Photo: Lisa Eicher)

It’s not your average art studio. When you walk through the doors at Sandal Gap Studio, a nonprofit studio for artists with intellectual disabilities, you might be surprised by what you see. Fifteen-year-old artist Sevy Eicher cruises by, perfectly balanced, on a battery-powered hover board while her 4-year-old brother Radko chases after her, yelling for his turn to ride. Radko’s forehead looks like an artist’s palette, with brushstrokes of bright magenta and gold paint that Sevy applied to his round face earlier in the day. In the corner, a three-legged dog lounges on a blanket, completely unfazed by the chaos.

The Eichers are every bit as unconventional as their Memorial-area art studio. Mom Lisa, a writer, and dad Joey, a consultant in the waste industry, have four children, two of whom were adopted from Bulgaria and have Down syndrome. They also have seven disabled rescue dogs, six of which have only three legs. Lisa, who happens to be a two-time competitor on NBC’s American Ninja Warrior, homeschools all four children, Sevy, Archie, Ace and Radko. In between school lessons, all six Eichers work together to get the studio ready to open to the public.

About a year ago, Lisa and Joey discovered that Sevy, despite being nonverbal, is a talented artist. She enjoyed spending time in the evenings sitting at the kitchen table, drawing on paper with a pencil, and one day her doodling caught Lisa’s eye. “I started paying attention to what she was doing, and it was really intricate,” said Lisa. “It wasn’t just random scribbling.” They gave her some colored markers and set her loose to draw whatever she wanted. Sevy took the opportunity to draw all over the walls in her bedroom. “It was really good. It was like she drew a full mural,” Lisa said. 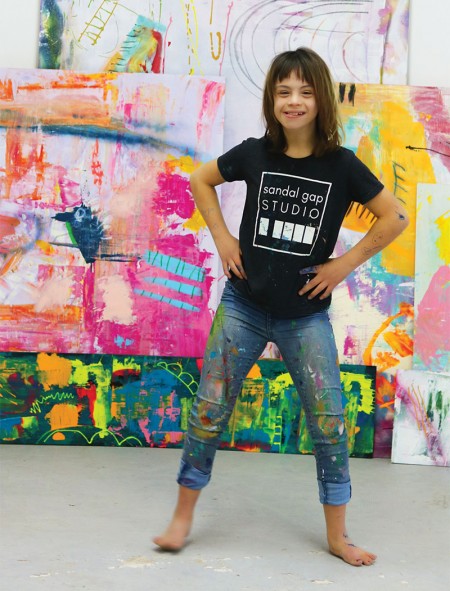 Sevy Eicher, who has Down syndrome, may be nonverbal, but she expresses herself through her art. (Photo: Lisa Eicher)

Curious about what else she could do, Joey went to the garage and searched for anything he thought Sevy could use for an art project. They didn’t have paint brushes, but he gave her random supplies left over from their post-Hurricane Harvey flood renovation. Scraps of wood, house paint, scrapers and even a crow bar became artist’s tools, and Sevy started painting on a wood panel. She couldn’t communicate what she was creating, but Lisa says each paint stroke was intentionally placed, and somehow it seemed Sevy knew exactly what she was doing. “It was like she was brought to life,” Lisa said.

Painting became the focus of Sevy’s days. She created brightly colored, modern, oil-on-wood paintings in a makeshift studio in her parents’ bedroom. The number of paintings and supplies constantly grew, and eventually Sevy’s work took over the entire master bedroom. Feeling edged out of their room, Lisa and Joey relocated upstairs to give her more space.

“It wasn’t my idea to move upstairs and live like roommates with our kids, but I knew it was the best option for Sevy,” said Joey. “She needed somewhere that she knew was her place to paint, instead of just wherever we set her up around the house.”

Lisa took photos of Sevy’s paintings and posted them on the family’s Instagram page (eicherumba). The response from friends and family was overwhelming, and led the Eichers to create Sevy’s own Instagram page (SevyMarieArt) to showcase her work. After initially brushing off suggestions that they sell Sevy’s paintings, Lisa and Joey realized art could be a real career for her, a way to earn money and find fulfillment into adulthood. In the past year, Sevy has created more than 200 paintings and attracted more than 23,000 Instagram followers worldwide. When the Eichers released her first collection online in April 2018, it sold out in less than an hour.

Sevy has several different painting styles, depending on her mood, but she always paints on wood. She prefers it to canvas, because she can scrape and stab the wood, creating a unique look. Her pieces are brightly colored and are always several layers thick. She adds paint strokes, sometimes dripping additional paint onto the wood, and works until she’s happy with it. When she’s finished, Sevy steps back to admire her painting with a big smile. “She’s always in awe of her own work,” said Lisa. 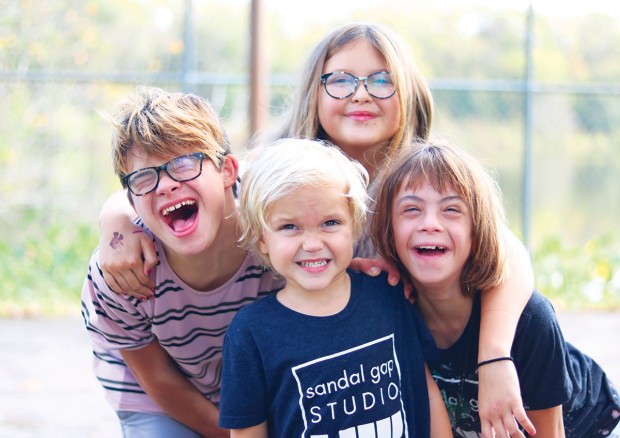 The Eichers never imagined their lives would take this path into the art world, but ever since she was a child, Lisa was sure about two things: she wanted to adopt children and she wanted to help people with special needs. As teenagers, she and Joey, who were high school sweethearts at Memorial High School at the time, spent their weekday afternoons babysitting a neighbor’s child with Down syndrome. The experience sparked a passion for special-needs children.

Not long after they married, Lisa and Joey welcomed biological daughter Ace. When it came time to add another child, they researched international adoption and found Reece’s Rainbow, a Bulgarian adoption ministry for children with Down syndrome. It was the perfect way to blend their interest in adoption with their love of special-needs children. They brought their son, Archie, home from Bulgaria in 2011. After Archie came biological son Radko, and Sevy was adopted from Bulgaria in 2016.

The family’s two adoptions were quite different. Archie’s integration into the family was seamless because of his loving, easy-going personality, but Sevy’s experience has been more difficult. After moving around through different Bulgarian institutions for her entire life, Sevy arrived in Houston untrusting and generally angry. “She was walls up,” Lisa said.

Lisa candidly shares her struggle to form a strong attachment with Sevy on the family’s Instagram page, and concedes that, while there has been a huge improvement, there is still progress to be made. After talking to other moms who adopted, Lisa learned that many of them had the same attachment issues she has with Sevy, but they were afraid to tell anyone. “I understand why people want to keep quiet. It feels shameful to not feel that love,” Lisa said. She also uses social media to show the reality of life with special-needs kids. “There are so many fears and unknowns around kids with Down syndrome and disabilities, and I want to debunk the myths and really promote inclusion by showing a little bit of everything in our unconventional life,” she said.

In a couple of months, the Eichers plan to have Sandal Gap Studio up and running. Sevy has already claimed her spot in the new studio, giving her an additional place to paint. The studio got its name from one of Lisa’s favorite physical traits of people with Down syndrome. A “sandal gap” is the extra space between the big toe and second toe that appears in people with Down syndrome.

“It’s a place where people can come and feel included,” Lisa said of the studio. Local artists will be invited each day to learn various techniques, practice, create and sell their work. The studio will rely on volunteers and donations to ensure that artists receive 100 percent of the earnings from their art sales.

Sevy’s art led the family to open the new studio, but the idea of creating something to include and integrate people with special needs was around long before Sevy began painting. It was Ace’s idea. In her short 10 years, Ace has a history of wanting to include people who are different, and she was searching for a way to share what she learns from her siblings. When Sevy started painting, friends would come over to the Eichers’ home to paint and hang out. Art was the great equalizer between them, and Lisa and Joey realized it was the perfect way to bring Ace’s dream to fruition. “Sandal Gap Studio isn’t necessarily about art, per se, but about using art as the vehicle to promote inclusion,” said Lisa.

Lisa and Joey are not surprised that Ace was the one who came up with the idea. She is protective of her siblings and has always been interested in the ideas of justice and equality. Last year, Ace was asked to speak to the second graders at Hunters Creek Elementary about how to approach people with Down syndrome and other disabilities. She brought Archie and Sevy with her, and gave this advice: “You can always go up and talk to them. Always just be friendly and talk to them how you would talk to anyone else. If you need help, go ask their mom.”

Sandal Gap Studio is already a second home for the Eichers. Sevy has her own dedicated studio space, and all of the kids are enjoying using it as a playground until the other artists arrive. Sevy’s works in progress line the walls, and the floor in her studio is appropriately covered in several shades of paint. Now that they are getting settled, Lisa and Joey can finally move back into their bedroom. “We still have to use the bathroom upstairs, though, because the master bathtub is where she cleans her paint brushes, and it’s permanently stained,” said Joey, smiling. “That paint isn’t coming off. It’s there forever.”