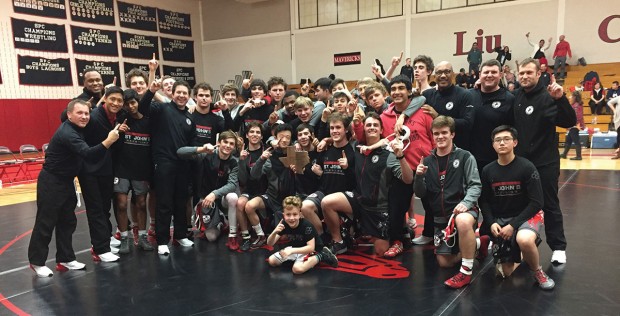 “We’ve won several SPC titles, and two years ago also won our first individual state championship, so this championship really caps off a wrestling trifecta of sorts for our guys,” said Mavericks head coach Alan Paul. “I was really happy for the team.”

The Mavericks boasted five wrestlers who went a perfect 5-0 in the dual meet, including a magnificent victory for senior Harrison Fernelius. In the championship finals, Fernelius upset Bishop Lynch’s Warren Walls, who is ranked seventh nationally in prep wrestling, to win the 220-pound weight division. “That had to be the highlight of the meet,” said Paul. “Harrison somehow fought off his back to pin the guy. It was a remarkable win.”

Also going undefeated for St. John’s in the meet were sophomore Ken Matsunaga (106 pounds), junior Thomas Grannen (126 pounds), sophomore Sebastian Jimenez (138 pounds) and senior heavyweight Roman Lewis. In addition, sophomores Michael Daichman and Thomas Chang, as well as senior Malcolm Sturgis, secured key victories in the final duel of the day versus Bishop Lynch. “The boys really wanted to get this championship,” said Paul. “It was a huge victory for us.” 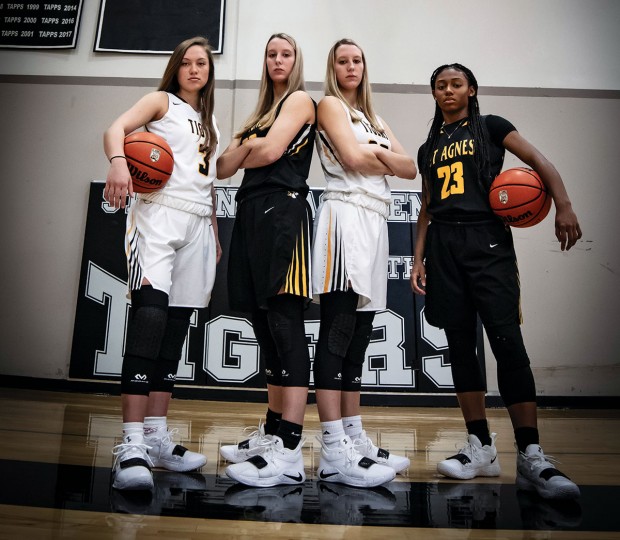 With a 28-6 record late into the season, the St. Agnes Academy Tigers were again ranked among the state’s top private school girls’ basketball programs. Plus, the season took on added significance for Tigers head coach Jeff Hollinger, who secured his 300th career victory in the Tigers’ semi-final win during the Houston Christian Mustangs Classic.

“The thing that’s most special for me about the 300 victories is that all of those wins have come in my 13 seasons at St. Agnes,” said Hollinger. “It’s just a great place to coach. The kids and parents are awesome. My assistant coach, Chelsea Bass, was a four-year letterman here before playing for Texas, while 2014 graduate Michelle Nwokedi scored over 2,000 points at St. Agnes before playing at the University of Pennsylvania. A lot of great players have come through our program.”

One day after Hollinger’s 300th career victory, Tigers senior Katie Dickerson scored her 1000th career point, doing so in the Tigers’ tournament championship victory over The Village School. A few weeks later, Dickerson’s twin sister Kelly scored her 1,000th career point. Tigers senior Madison Lucas reached the same scoring milestone two days later in a St. Agnes win over Beaumont Kelly, while Tigers senior Emily Nelson surpassed the 1,000-career points mark as a junior last season. “All four of those girls have been varsity players since they were freshmen, and to have all four of them reach that kind of scoring plateau is pretty incredible,” said Hollinger. 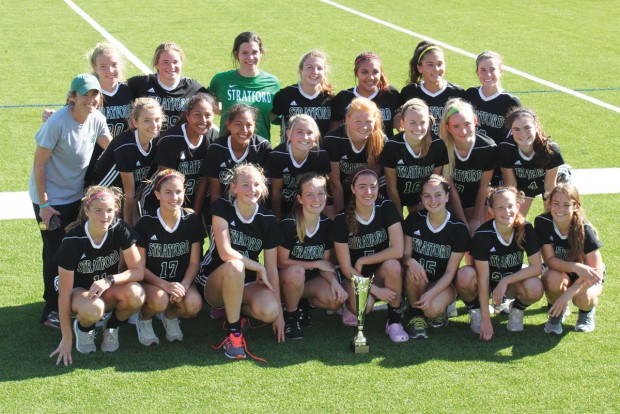 STRATFORD WIN The Stratford Spartans kicked off the girls soccer season with an impressive championship in the I-10 Shootout tournament.

The Stratford Spartans kicked off the girls’ soccer season in impressive fashion by winning their bracket in the prestigious I-10 Soccer Shootout. The Spartans defeated FB Austin, Morton Ranch and Foster to win the title. “It definitely was an exciting way to start the season,” said Spartans head coach Gena McGee.

The Spartans then followed up their victory in the I-10 Shootout with a strong second-place finish in the Spring Branch ISD Girls Soccer Tournament. The Spartans advanced to the championship final before falling to the defending 6A state champion Memorial Mustangs by a 1-0 final in the title game. “It was a fun game to watch and coach,” said McGee. “Both teams played well and had lots of scoring chances. Playing a great team like Memorial really motivates our girls to make a name for themselves. I feel like every time we play them our team puts every ounce of energy they have into the game.”

As for the games so far this season, McGee says the Spartans’ offensive attack has been led by junior midfielder Ashton Kettler. “She’s definitely a dangerous player with the ball.” In addition, junior forward Allison Fuller was the Spartans’ leading scorer leading into district play. On defense, McGee had high praise for sophomore defender Ally Padron, as well as senior defenders Liv Green and Peyton Nichols. “We pretty much have girls who contribute across our entire lineup.”