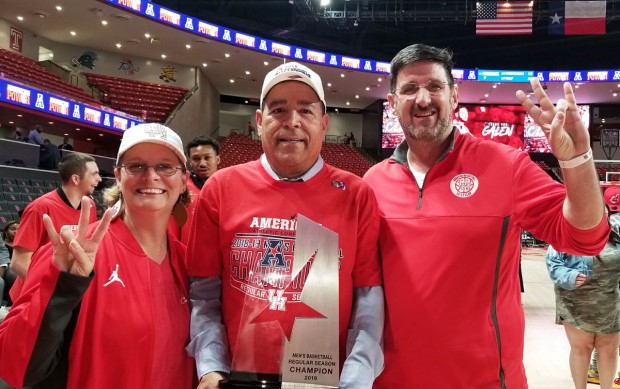 If you haven’t heard, the 2018-19 University of Houston men’s basketball team, including proud Houston native and Westbury Christian graduate, Galen Robinson Jr. (who created the slogan #ForTheCity) are the 2019 American Athletic Conference (AAC) champions. This season they were ranked in the top 10 nationally, which hasn’t happened since the ’80s. Head Coach Kelvin Sampson is a semi-finalist for national coach of the year. With March Madness upon us, get inspired by some very loyal University of Houston Cougar fans that have been going to UH games before any current players were even born.

Many basketball lovers can say they were fans of the infamous 1982, 1983 and 1984 University of Houston Phi Slama Jama teams. But how many people can say they had amazing floor seats so close to the court they could practically reach out and touch the players for every single tournament game? 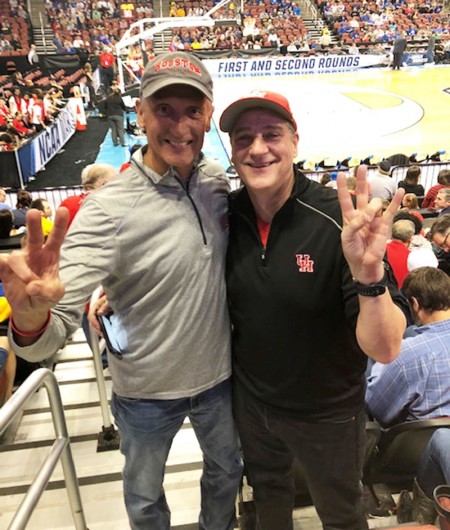 Gus Pappas and Ronnie Bradshaw at the first two rounds of the 2018 NCAA tournament in Wichita.

Bellaire resident Gus Pappas can because he had the honor of being a proud University of Houston cheerleader during those historical years with the Texas’s Tallest Fraternity.

“I still have bits and pieces of all the cut nets from those days. The magnitude of what we were a part for three straight final fours was not lost on any of us. We knew we were a part of something special. Although we never won a championship, it does not diminish the journey to the top which endures to this day and is reborn each March with the madness, which is finally back in Houston.”

Gus may have retired his megaphone, but he’s still happy to cheer on the Cougars even though now he has to pay for his seats. Gus traveled to Wichita for the 2018 UH games and plans to travel to every 2019 March Madness game, too. 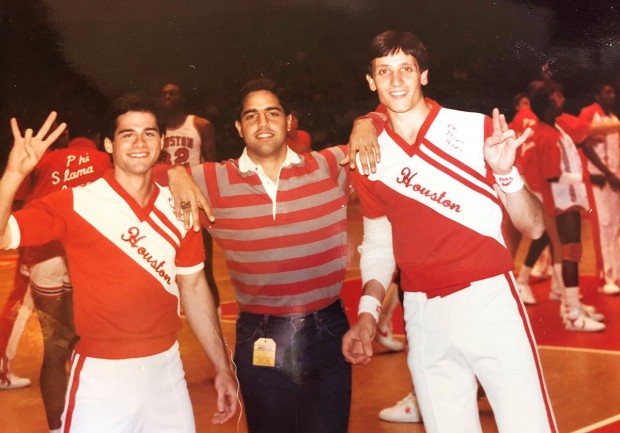 Patty Godfrey, past President of the University of Houston alumni association and coordinator for the Annual UH Men’s Basketball “Tip off Dinner” confesses that, over the last 20 years, being at the games hasn’t always been easy. “We’ve seen the good, the bad, the ugly and uglier!”

On March 5, 2017, Cougar Nation said thanks for the memories to the aging Hofheinz Stadium where basketball games had been played since 1969.

While the arena was being built during the 2017-18 season and the early part of the 2018-19 season, the Cougars played their home games at Texas Southern University’s H&PE Arena.

Patty gushes, “Everyone at Texas Southern University Stadium was great and UH won every home game we played there, so that was fun!” 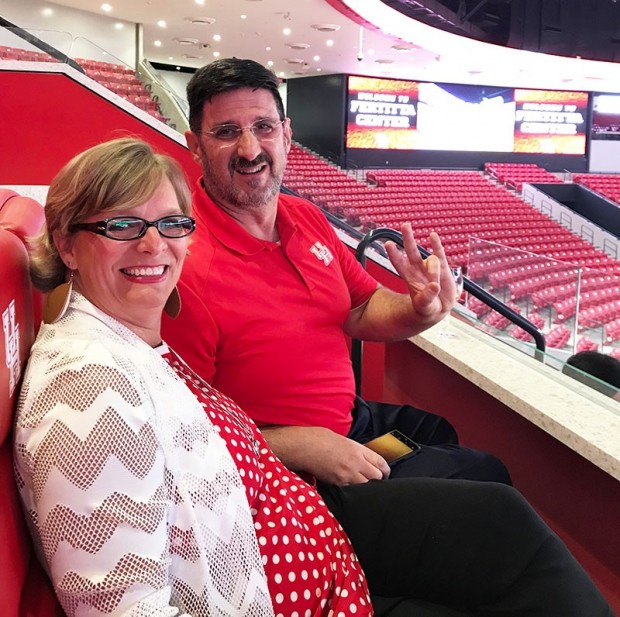 Longtime season ticket holders Patty and Kevin Godfrey, checking out their plush new seats at the inaugural game at the Fertitta Center on Dec. 1, 2018.

Patty and her husband Kevin are excited about the new chapter for UH basketball at the state-of-the-art Fertitta Center, which hosted its first game on Dec. 1, 2018.

“It’s amazing what Coach Sampson has done with the program. It’s just been electrifying. Last year was so exciting being part of the NCAA March Madness. We can’t wait to see what happens this year.”

Season ticket holders since graduating in the ’80s, Tim and Pamela O’Rourke have remained true to their alma mater. Even Tim, a glass-half-full kind of guy, admits that over the last three decades there have been some trying times when the team was been consistently “not great” (including a 2-14 conference game record one year).

“Sure, a couple seasons we were terrible and sometimes it’s been tough being a Coog basketball fan, but no matter what, you have to be loyal to what you’re loyal to. We’re always going to stick by them and be excited for the team whether they win or lose.”

Thankfull,y this 2018-19 team has been light years beyond terrible. Tim says excitedly, “They’re so much fun to watch with great defense senior guards and are a great tournament team.” 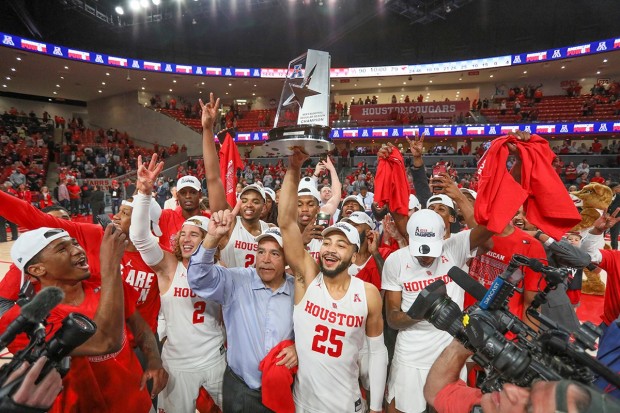 Tim and Pamela, along with other fans, were thrilled to hear that the Cougars drew a No. 3 seed and they’ll open the NCAA Tournament with their highest seeding in 35 years. The March Madness journey begins on Friday, 6:20 p.m. in Tulsa, Okla., versus Georgia State. Hopefully this March Mad adventure will end with a national championship trophy.

Tim shared, “Our city is proud of this UH basketball team. Houstonians are great about supporting any team whose t-shirt says Houston on the front of it.”

So whether you’ve been to over 1,000 UH basketball games or not, all fans are welcome. Just dribble up your favorite red and white clothes, put your hand high in the air (if you don’t know how to do the paw thing the Cougar family will be happy to show you) and be standing by to yell, “Go Coogs!” 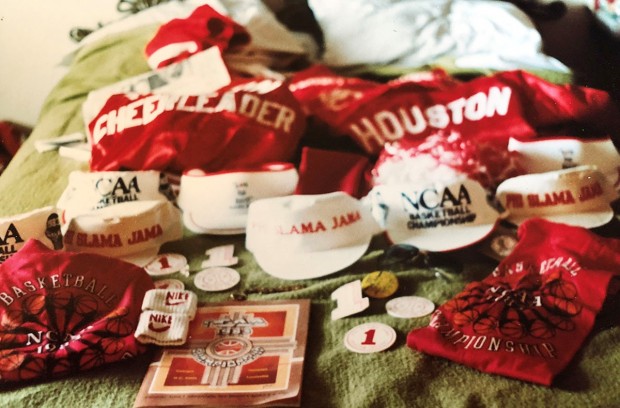 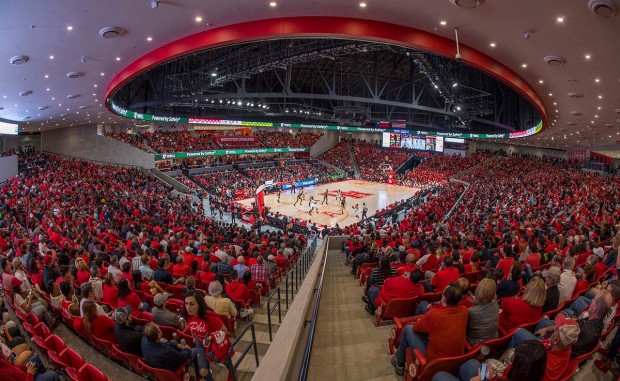 UH fans sit on the edge of their seats watching the Cougars on their way to another win at the Fertitta Center. (Photo courtesy of University of Houston Athletics)

11:00 am to 1:00 pm
Location:
Junior League of Houston
END_OF_DOCUMENT_TOKEN_TO_BE_REPLACED