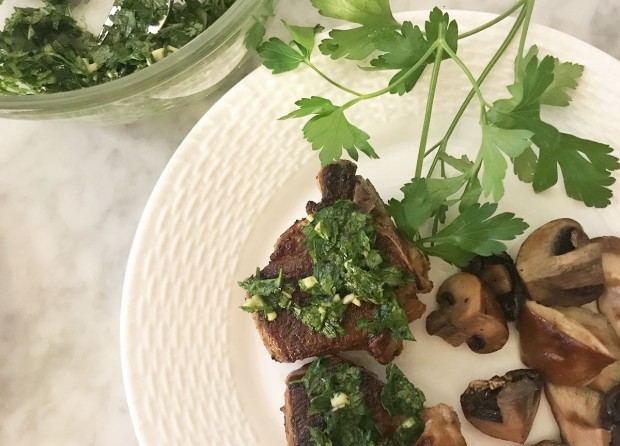 These lamb chops are impressive enough to serve at a dinner party but quick enough to make on a weeknight.

There are restaurants – I visited one last week – that still serve old-school, extra-green mint jelly with lamb. Some people very close to me wouldn’t think of eating their lamb chops without it. For all of them, mint jelly it is. But for those of us who might want just a little update, something fresher and brighter that doesn’t have a shelf life, here is a Minty Gremolata to enjoy alongside our lamb.

Traditional gremolata is a rough chop of parsley, garlic and lemon. It’s the classic accompaniment to osso bucco, as it cuts the rich veal shanks with a hit of freshness. It’s also served often with grilled meat or fish for the same reason. With a little bit of mint, though, it becomes a super-fresh version of the mint flavor we grew up expecting with lamb. But even better, because the mint gets balanced by the garlic and parsley, brightened by the lemon, resulting in an all-around crave-able relish.

Don’t be put off for a second about making lamb chops on any given night when you want a good dinner that doesn’t require hours in the kitchen. This is the easiest thing in the world to make and can truly be thrown together in less than 30 minutes. It’s also impressive-tasting enough to serve at a dinner party.

Think of it as lamb chops with a modern twist.

Combine all the ingredients and let the gremolata sit while you cook the lamb chops.