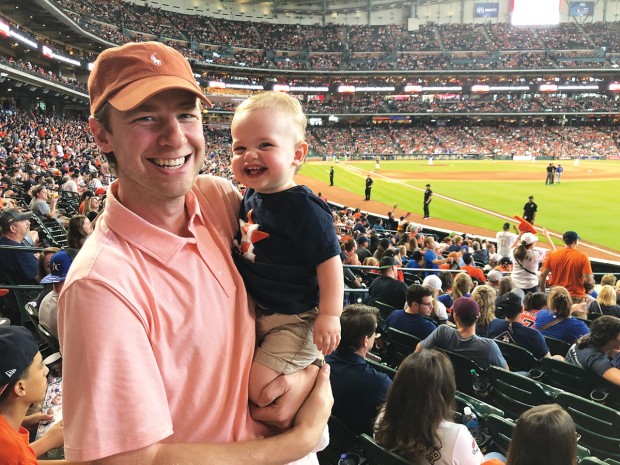 FATHER-SON FANS Brad Beasley, here with Parker in June 2018, took his son to his first Astros game against the Kansas City Royals when he was 14 months old.

Erin Rushing laughed as she recalled carrying daughters Hannah and Tabitha up a crowded escalator at a Houston Astros game at Minute Maid Park while very pregnant with her fourth child, Abigail.

It was Erin and her husband David’s first time to take their kids. Pre-kids, the longtime fans followed the players’ careers and frequently attended games. “We wanted to share that love of the game and the atmosphere of Americana,” she said.

Their oldest children have August birthdays, so they decided to celebrate in August 2016 at the kids’ first Astros game. Noah was 5, Hannah, 3, Tabitha, 16 months, and their fourth child, Abigail, was in-utero.

The Astros were playing the Tampa Bay Rays that day. The family wandered around the stadium, smelling hot dogs in a sea of fans and hearing the calls of the announcer.

At a tall escalator in a large crowd, David jumped on with an overly excited Noah, and up they rode. Noah couldn’t wait to see a view of the field. Erin waited in line and when it came time to hop on, neither Hannah nor Tabitha would do so. She stepped aside.

She quickly called David on her phone, but Noah had a meltdown and refused to come back down. With large crowds amassing behind her, “I hoisted [Hannah and Tabitha] and my very pregnant belly up, and all four of us girls went up the escalator together. I feverishly prayed that I didn't fall backwards. It was a true mom moment, getting it done.”

Tabitha had just started walking, so the parents took turns out of their seats letting her toddle around. “She wanted to explore every nook and cranny of the stadium,” said Erin. “Everyone always thinks newly walking babies are adorable, so the other game attendees were all too happy to move so she could walk and give her smiles and high fives.”

The Rushings stayed through the seventh inning, and let the kids pick out a souvenir on their way out. They have mini-season passes now (for 28 games) and attend regularly.

For a lot of Buzz families, attending Astros games is a multi-generational rite of passage.

Brad Beasley grew up going to the Astrodome with his father and grandfather, so he carried on the tradition with his son Parker. Last June, Brad took then-1-year-old son Parker to his first Astros game, against the Kansas City Royals. Brad’s wife Kelsey was out of town, so it was a father-son outing. 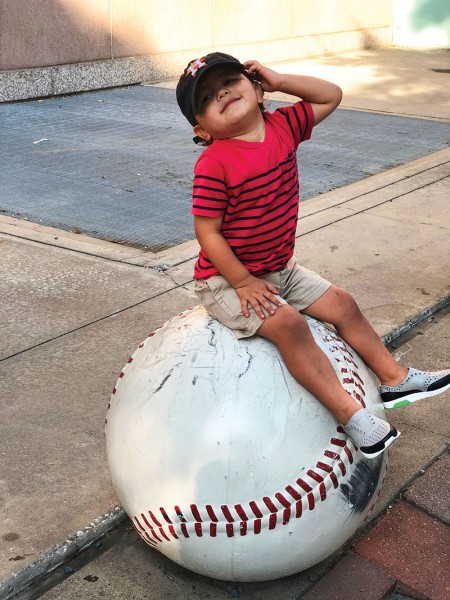 BIG FAN Grayson Lissonnet, 4, has been going to Astros games with his family since he was an infant.

Brad says he packed a lot of snacks (you can bring your own into the stadium). To his pleasant surprise, the intense noise didn’t bother the tot. “I really did not know how Parker would do, but we had a great time,” said Brad. Brad says when Parker was a baby, his eyes were even drawn to the television with the World Series games on. “He is diehard, apparently,” Brad said, laughing.

Alafair Hotze, who works in investor relations, and her husband Bruce Hotze, a sales manager, bring their clients to Astros games. They also bring their three little ’Stros fans, Henry, 6, Lida Beth, 3, and Savannah, 7 months. Thanks to their work, they have access to a private suite at Minute Maid Park. Alafair says with three small children, the suites are an easy way to stay comfortable. “They have lots of snacks.”

When Henry was small, Alafair stepped out of the ladies’ room with him to discover the team mascot Orbit walking by. “I grabbed Henry to get to get him an introduction and a hug,” she said. “He made my little man’s day.”

Jenny Lissonnet says her 4-year-son Grayson is “Astros obsessed.” “One of his first toddler sentences was ‘I go to the baseball game,’" she said, laughing. Jenny has been taking her family ever since Grayson was an infant. When he first learned how to clap, he’d clap his heart out at the games when the crowd cheered. Now, when they go, he eats ice cream, chants for the team, and stands to sing Deep in the Heart of Texas.

“Baseball through the eyes of a child is priceless,” Jenny said.

• Kids under 2 do not need a ticket, but they must sit in an adult’s lap. After Sunday day games, kids ages 5-12 can run the bases (the line starts at Section 131/132).
• Think twice about bringing a stroller. You can bring the stroller into the stadium but not to your seat – you must leave them at the Fan Accommodations Centers.
• If you want something for the memory book, get an official “My First Astros Game” certificate (near the private nursing room near section 323).
• Fans can bring their own snacks. Of course, there are always the beloved baseball game staples like hot dogs and peanuts, but getting up out of the seat constantly and waiting in a long line could make for a more difficult outing.
• There are diaper-changing stations in the restrooms.
• If you plan to drive your own vehicle (instead of taking an Uber or taxi), there are helpful parking maps to make planning ahead easy. See mlb.com/astros/ballpark/parking.