That I did something about 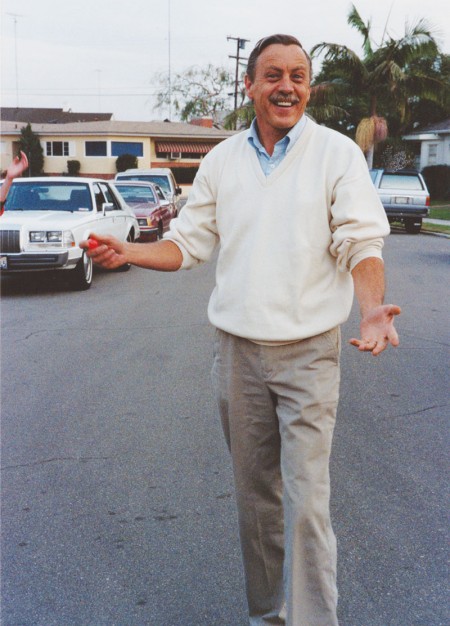 GEORGE A mid-‘80s look at George Flynn Jr. about to throw a cherry bomb in San Diego.

April marks the sixth year since George died. That’s one year longer than our five-year marriage.

George was one of those crushes that I never did anything about: a smart, witty, rascally courthouse newspaper reporter, tall, thin, good-looking in a disheveled way, as if he were unaware of his own appeal.

He lived fast and hard, embracing his vices and virtues in a rich tapestry of humor and self-acceptance, and like a lot of journalists of his day, he smoked as if it were a part of the trade.

I don’t remember a specific conversation with him back in the ’70s. He was seven years older and had no reason to take me seriously.

I more or less knew him by proxy, through the shop talk of other journalists who seemed to want to know what he thought about a judge, a verdict or a story one of his peers had written. Gary Taylor, his friend and colleague, mentioned he often wrote with the attitude of trying to draw a compliment from George.

Whatever fantasy I had about George vanished with the news that he had taken a job at The San Diego Union-Tribune. In my mind, a bit of the interest, edge and love for the story in the Houston news landscape went with him.

By the ’90s George Flynn Jr.’s byline reappeared in The Houston Chronicle and, later, The Houston Press, which I duly noted. Meanwhile, life went on; the kids grew up, and something in me stirred, which seemed to somehow align with a couple of hurricanes.

In August of 2005, Katrina hit New Orleans, forcing the evacuation of tens of thousands into the Houston Astrodome. This event had the effect of making me employable, handling news and information for the City of Houston on disaster-recovery matters. I was at it a year when I found myself evacuating my own marriage of 24 years. In the meantime, I was in need of a cracker-jack website content manager in the city’s quest to help settle evacuees.

I presented a list of three journalists’ names to Mayor Bill White’s communications director, Frank Michel, the former editor of the Chronicle’s editorial page. I asked which of the three he would pick? He said George, hands-down.

George responded quickly to the interview request, saying he remembered my name but couldn’t quite put it to a face. We were to meet at 10 a.m. the next day.

As soon as I opened the door to the lobby, there he was, in suit and tie, sitting cross-legged on a sofa, more handsome than I remembered. That disheveled brown brillo pad on his head had relaxed into white waves of well-appointed, movie-star hair. He looked like a version of Jimmy Stewart in his later years.

He stood and greeted me with a nod of instant recognition as my face and name came together, forging the next chapter.

Still, I was his boss, and we had work to do. My game face was on.

For the next year, I played boss to my highly overqualified website content manager, and listened while two single women confessed their crush on George, obviously not noticing mine.

But our project was winding down. As staff was reduced from five to two, George was assigned to the office next to mine.

His computer was connected to the shared wall opposite my computer. As soon as it was connected, a test email emerged in my inbox. “I feel like there’s a wall between us. – George.”

I caved. He started walking me home along Buffalo Bayou after work at dusk. We would sit on my patio as he rubbed my feet while the day gave way to downtown lights, which glistened, even on Buffalo Bayou. To me, we were Keaton and Allen in Manhattan.

One of my daughters dropped in once on this foot-rubbing scene. “Don’t worry,” George deadpanned. “I plan to ask for your mother’s foot in marriage.”

Fortunately, George was recruited to a public information job in the DA’s office, leaving me conflict-free as the Katrina era at City Hall wrapped up just in time for Hurricane Ike.

We were married on the Sabine Street Bridge under the downtown skyline shortly after Hurricane Ike blew through his downtown high-rise, soaking everything he owned.

Six months later, I was diagnosed with a brain tumor the size of my fist. It was benign and successfully removed in a 10-hour surgery. George would later quip that I wouldn’t have discovered the brain tumor had we not decided to get married. “When Cindy told her friends she was marrying me, they said, ‘You need to have your head examined.’”

In those short five years, we buried each of his parents, both of mine, and, finally, after a heart attack, George. I wouldn’t have missed a minute of it.  Still, it’s time to put this story to bed. Stan-the-Man is in the wings.

Editor’s note: Journalist friends of George came together to honor him in his obituary.