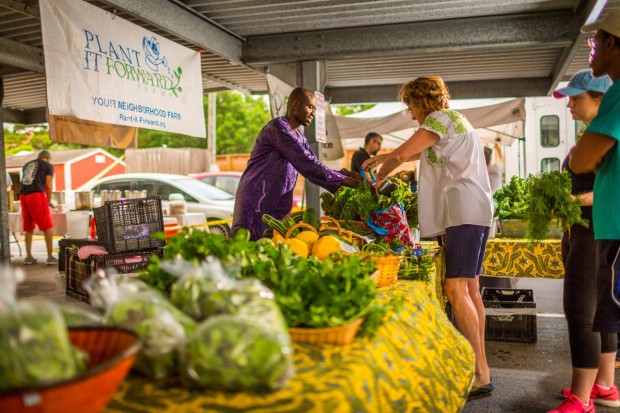 Do you ever get the city blues and long to get away from it all but you’re too tired to drive out to the country? You will be pleasantly surprised to discover some country farms right in Houston’s own backyard where you’d least expect them.

Meet Plant It Forward Farms, a nonprofit that’s been helping resettled refugees find meaningful work through urban farming in Houston since 2011. Plant It Forward secures land, selects, trains, and mentors farmers to each have their own urban farm and to sell it under the Plant It Forward brand. Some of the countries the farmers have come from include Congo, Cameron and Darfour.

Buzz-area resident Teresa O’Donnell, co-founder of Plant It Forward, shares, “I’ll always remember the first time our families went to sell the food they had grown at a farmers market. We were nervous and didn’t know if anything would sell. Things were pretty slow at our table but then towards closing a man looked at the produce and said he would buy everything we had left. That was Houston’s legendary chef, Chris Shepherd. That was just the hope we needed.”

Plant It Forward had another well-known chef take time to get to know them in 2016 when Anthony Bourdain highlighted the organization and its farmers on his Parts Unknown Houston episode. 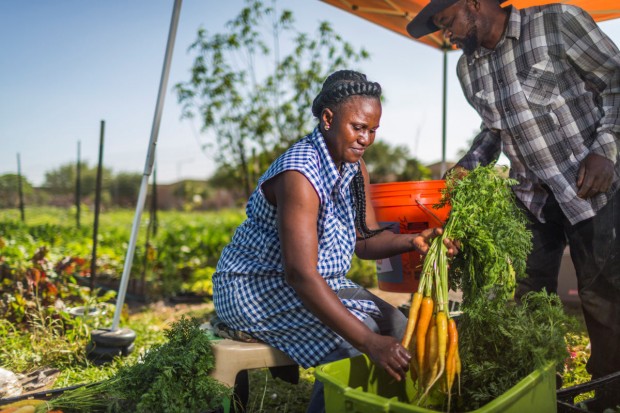 Farmers Henriette and Sarment wash and bunch fresh-harvested produce at their farm.

Farmers have enough land to support a family of four while also providing quality produce to Houstonians. Plant It Forward is on a mission to have a farm in every neighborhood, operated by people achieving the American Dream. They currently have four farms around Houston.

Like any friendly country neighbor, the farmers and Plant It Forward family would love to have you come on by this Saturday, April 27 from 1-4 p.m. for a good, old-fashioned garden party Plant It Forward Farms style!

Some of the fun at the First Annual Plant It Forward Farms' Urban FarmFest will include Congo-Cajun crawfish, green gumbo, face-painting, tater tats, yoga on the lawn (1 and 2 p.m.), farm tours, a veggie and herb plant sale, kids' activities and more. This event will help Plant It Forward bring more urban farms to Houston. Take the opportunity to meet the farmers, enjoy the outdoors and spend time with your fellow neighbors.

Plant It Forward Farms provides fresh, seasonal produce that is free of chemical pesticides and is freshly picked for sale at local farmers markets. The farm offers fruits and vegetables that Texans grew up with, as well as the Plant It Forward farmers’ favorite produce from their homelands around the world.

Now be a good neighbor and come on down to the farm this weekend…it’s just down the road a bit. If not, hopefully Plant It Forward will see you soon. For now, they’re just happy to help keep both native and recently-arrived Houstonians growing, one plant at a time.

The First Annual Urban FarmFest takes place Sat., April 27, 1-4 p.m. at Westbury Community Garden, 12581 Dunlap St., Houston, TX 77035. The event is free admission (some activities will have a suggested donation, others are free.) and will take place rain or shine.

8:30 am to 10:30 am
Location:
Evelyn's Park Conservancy
END_OF_DOCUMENT_TOKEN_TO_BE_REPLACED