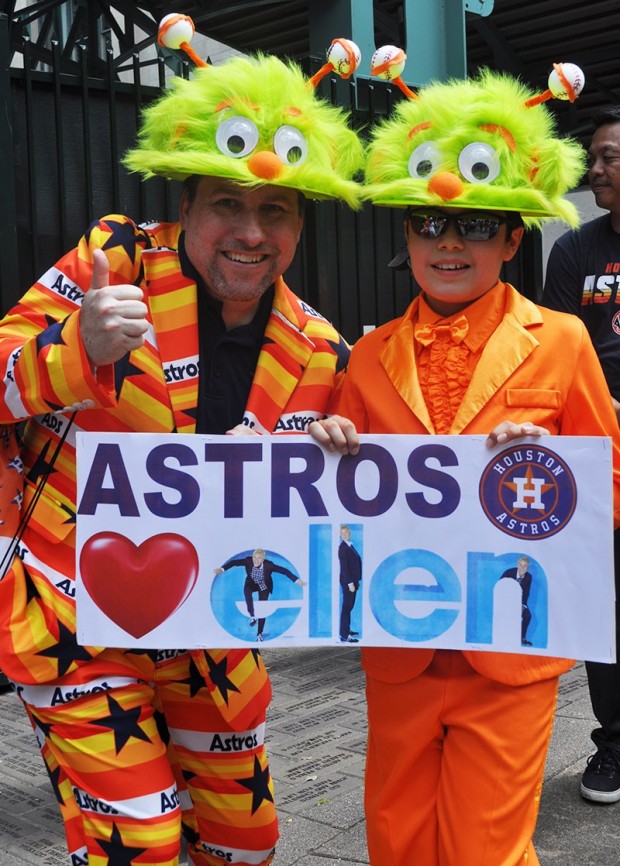 When loveable talk show host, Ellen DeGeneres, said, “Come on down to Minute Maid, Houston!” Astros fans showed up in full force and gave Hollywood a taste of “Houstonwood!”

On Wednesday, May 22, “The Ellen DeGeneres Show” taped a segment before the 7 p.m. Astros vs. White Sox game. Gates for the taping audience opened at 3 p.m. by the left-field gate. Some enthusiastic Ellen fans started lining up hours before and were happy to wait and be part of the experience — and to have a chance to make it onto the show. Eventually, there were hundreds of fans dressed in their best Astros gear lined up down Crawford Street and wrapped around to Texas Street. 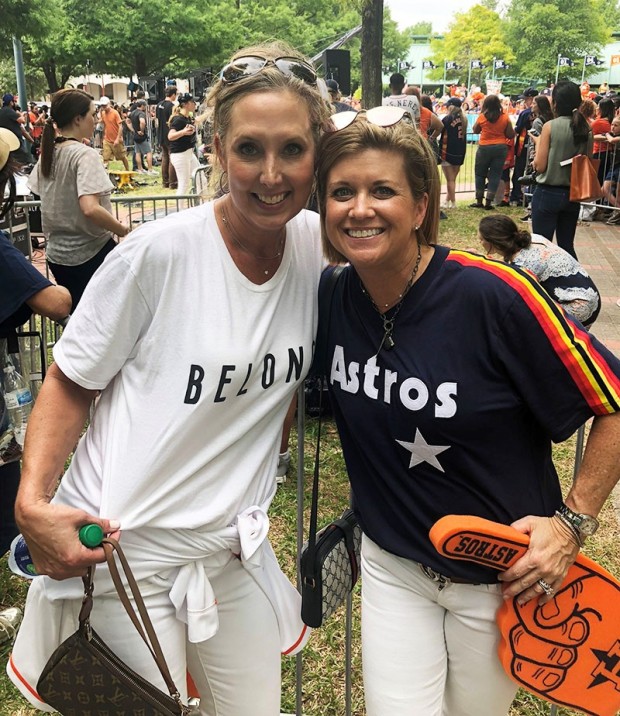 Karen Lee and Kim White having fun behind the scenes of the taping. (Photo: Karen Vine Fuller)

There was lots of great people-watching. Homemade green fur and googly-eyed Orbit helmets, a homemade astronaut costume including a clear, see-through plastic helmet with a hole cut in the front to breathe, an Astros Wrestler in full mask, orange and blue Mariachis, giant heads of Astros players, Alex Bregman face earrings, totally orange tuxedos - and the list goes on and on. The crowd included lots of families, longtime friends and brand-new friends.

Memorial-area residents Karen Lee and Kim White had a fun time. Karen shared, “Kim was the one who found out about the show being in town and we went on a whim!” Part of Karen’s attire was a giant orange foam ten-gallon hat. When they were leaving, she was on a mission to give the hat to a young Astros fan who she thought would enjoy it. See how nice Astros fans are?! 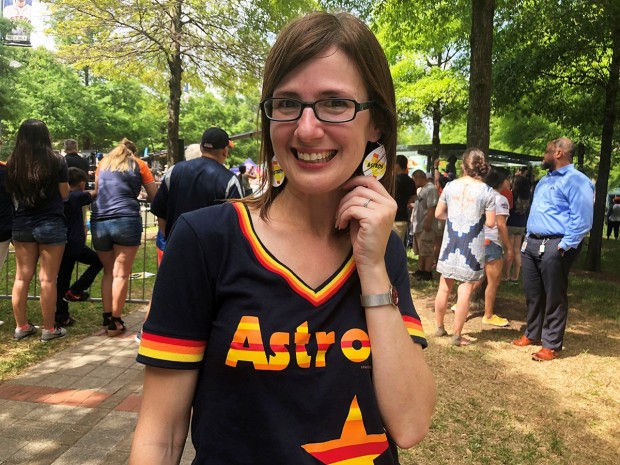 Dana Tritico, decked out in her awesome homemade Astros earrings, is a Houston Independent School District counseling administrator and a big fan of Ellen’s philanthropic generosity. Dana was all smiles. “I had a blast getting to meet Jeannie, Ellen’s assistant,” Dana said. Her brush with fame and special photo ops continued that evening during the game when Astros mascot, Orbit, came to give her a hug!

The Astros segment airs on “The Ellen DeGeneres Show”on Friday, May 24 at 3 p.m. on KHOU.

See KHOU to meet the Beaumont woman who won a car on "The Ellen Show." 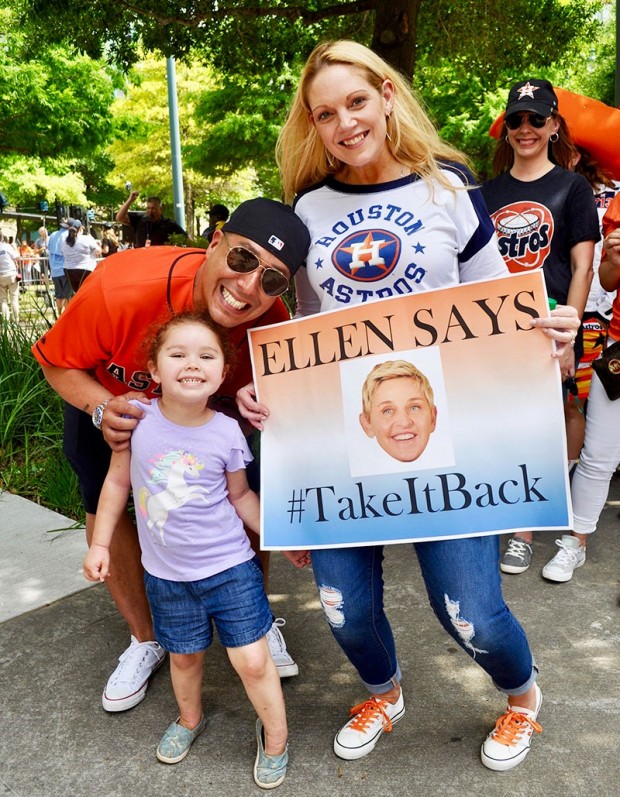 Parents Liz and Peter Cantu pulled their daughter Rio Cantu out of daycare early on Wednesday to make it in time for the taping. (Photo: Pooja Salhotra) 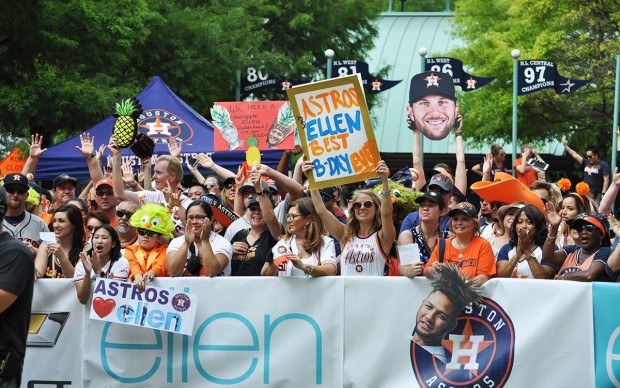 Ellen fans count down to the start of the taping. (Photo: Pooja Salhotra) 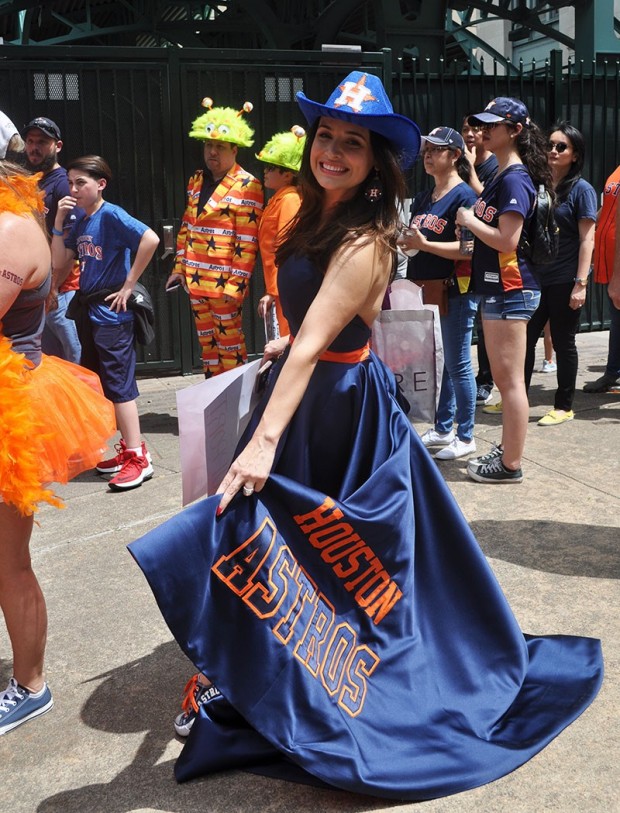 Jennifer Walsh designed this Astros-themed dress for a sports-themed gala she attended last year. She was hoping to get Ellen to auction off the dress to help raise money for the Goose Creek Education Foundation. (Photo: Pooja Salhotra) 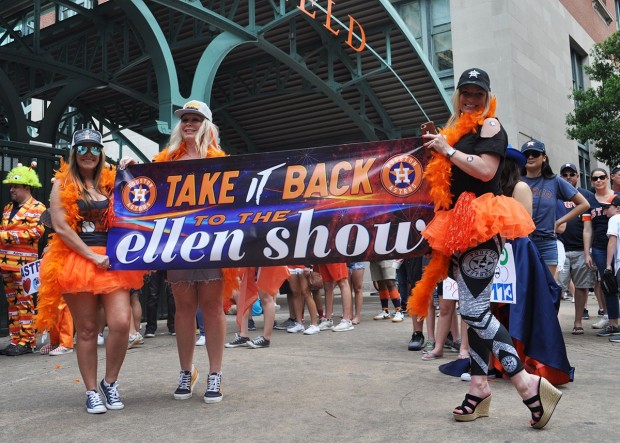