Getting Along: Coexistence at Hermann Park 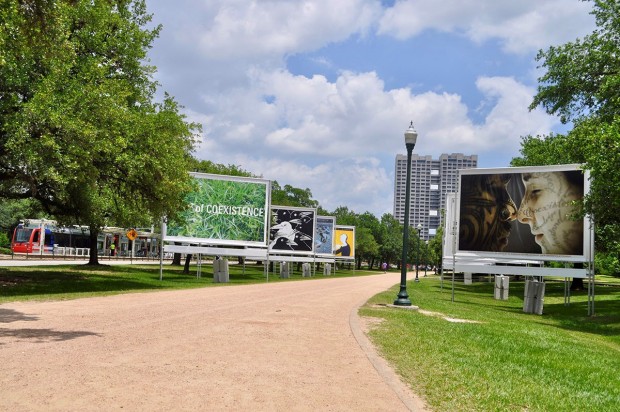 The panels send a message of tolerance and peace. (Photo: Pooja Salhotra)

In a city as diverse as Houston, it is important for people to be tolerant of each other’s cultures and worldviews. This is how we compromise and come together as a community.

Coexistence is a free outdoor exhibit installed at Hermann Park, hosted by the Holocaust Museum Houston. It opened on May 2 and will be on display until May 30. You can see the 9 by 15 foot panels of graphic art as you drive down Fannin Street.

On the panels, there are beautiful images that represent an aspect of coexistence, and below them, a quote from an artist or philosopher. The artists of the pieces all come from different parts of the world. The project was created in 2001 by the Museum on the Seam in Jerusalem, where the concept of coexistence is extremely important. 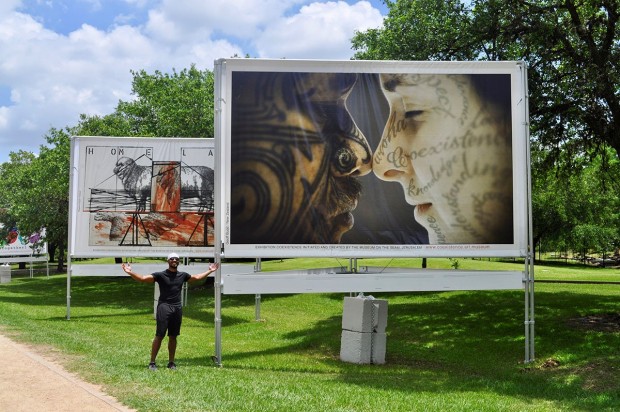 Though the pieces speak for broad themes, many visitors said they were touched by the exhibit. Steve Straughter, who often runs in Hermann Park, found a piece by New Zealand artist Geoff Bud to be personally meaningful. That picture depicts a black man touching noses with a white woman. “In every nation, people with lighter skin have advantages,” Steve said. “You see it in African American communities, in Asian countries - you see it all over.” He went on to express how the exhibit shows opposite sides commingling with each other: “You see that Judaism and Christianity are going together, and so is Islam.”

The exhibit is a conversation starter when it comes to talking about heavy issues such as war, race, and gender. The quotes and artwork are bold and are unafraid to present controversial ideas from different people, one sometimes contradicting the other. The viewer is free to find the truth in each perspective. Among the most impactful quotes was one by the Dalai Lama: “Only an enemy gives us the opportunity to practice patience. No one else provides us with the opportunity for tolerance.” 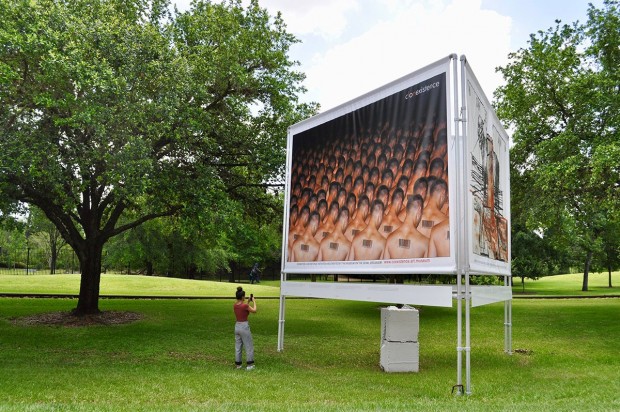 In an era of political divisiveness and change in the U.S and worldwide, Coexistence sends a message of tolerance and acceptance. The exhibit encourages us to see ourselves in what we perceive as the Other and to understand different viewpoints even if we do not agree. “I think it’s lovely,” said Maree Ikonomou who noticed the artwork this week while going for a walk in Hermann Park with her family member Dean. She is a Greek woman from Australia who has been living in Houston for 17 years. “We have to coexist,” she said. “We may look different, but we are all the same.”

Coexistence will be on view at Hermann Park through May 30. Park in Lot A at Hermann Park, as the exhibit is located near the Japanese Garden. Also, read the stories of three local Holocaust survivors in this article by Russell Weil. The new Holocaust Museum is scheduled to open June 22, after more than doubling in size. The Buzz will host an afternoon at the Holocaust Museum, open to all, Thurs., July 25 starting at 12 p.m., including a tour from docent Russell Weil. 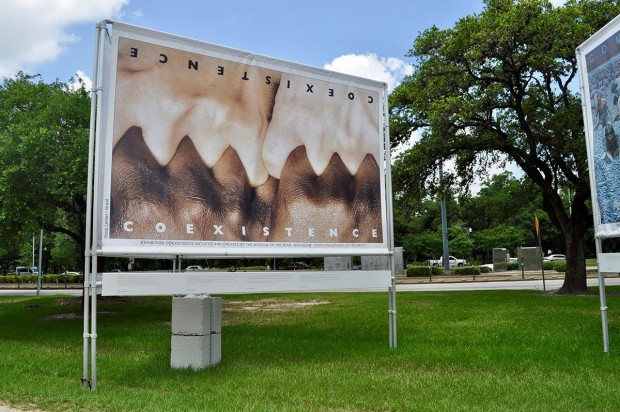