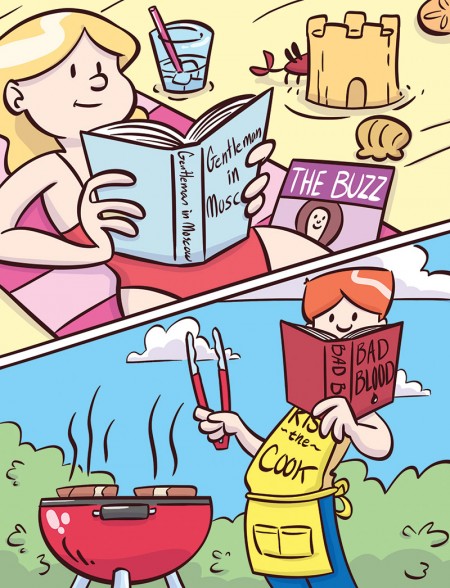 TIME TO READ Summer is the perfect time to dig into a long list of good books. (Illustration: behance.net/runamokstudios)

When she’s not leading a trust practice or mothering two teenaged daughters, you might find Jennifer Grosvenor plotting with a co-worker about what book to read next. Jennifer and her colleague Ben Fedorko have a long list of recent reads under their belts. Here, they’ve shared their thoughts on what books we should add to our own lists this summer.

Jennifer’s top recommendation is A Gentleman in Moscow: A Novel, by Amor Towles. “It was every bit as good as everyone said it was,” Jennifer says of the mega-bestseller that is soon to become a television series. “[Towles] has this beautiful, lyrical style. It’s a story about a member of the Russian aristocracy who is in house arrest in a hotel for decades, and the way he makes this really small physical existence feel much larger by the way he interacts with other people. [Towles] takes a sad premise and makes it hopeful and uplifting. One of my favorite books in the last few years.”

The Library Book, by Susan Orlean, is another of Jennifer’s favorites. “I loved libraries as a little kid,” says the native Galvestonian who grew up going to Galveston’s Rosenberg Library, Texas’ oldest library. “This book concentrates on a gigantic fire that happened in the Los Angeles Public Library. [Orlean] took that event and wove in stories about the history of libraries in America, what they do for people and how they’ve changed and adapted in recent years. It reads like a novel.” A bestseller and winner of several top book awards, The Library Book has been called “exquisitely written,” “mesmerizing” and “riveting.”

Jennifer, who leads Northern Trust’s Houston office, says her final suggestion is The Power, by Naomi Alderman. A New York Times 10 Best Books of the Year and a top book on a staggering number of lists, The Power is “about women who suddenly develop this power, and they can kill people with it if they so choose. It draws an interesting parallel to the way men have traditionally been so ‘in charge’ and deals with how women, who suddenly become powerful and in charge, figure out how their relationships with men and with each other change.”

Ben, a senior trust advisor and attorney, peruses the weekly top-books lists and then Googles the top five to see what interests him. Among his recent favorites, Bad Blood: Secrets and Lies in a Silicon Valley Startup by John Carreyrou is “a fascinating story about an ambitious young woman who had a lot of great ideas but took it too far. It’s amazing how many really high-profile and powerful people were drawn in and deceived. Extremely entertaining.” Named to many Best Book of the Year lists, this is the rise-and-fall story of Theranos, the biotech company founded by one-time superstar Houstonian Elizabeth Holmes.

Ben says Where the Crawdads Sing, by Delia Owens, “is a great, great summer read with lots of themes to interest lots of different people. It’s set in nature, in the Carolinas, and there is a love story, a murder mystery weaved through, the joy of being outside on the beach. It’s the story of a girl raised in a poor family with an abusive father – she winds up raising herself – and her coming of age in this unique environment.” The New York Times Book Review calls Owens’ debut novel “painfully beautiful.”

Ben also recommends anything by Wendell Berry, especially Hannah Coulter: A Novel. “Hannah’s first husband goes off to war during WWII and doesn’t return. She has a child who was born around that same time. The story is about rebuilding her life, what it’s like to be a mom and part of a rural community during a time when there were so many changes taking place. This is a book that will make you cry throughout.” Ben named his youngest daughter, 9-month-old Mattie, after the character in Berry’s novel Jayber Crow who “is full of grace and kindness and just has a sweet spirit,” Ben says.

“Completely off my normal reading path but hilarious” is how Ben describes Davis Sedaris’ Calypso. “A good, lighthearted read about getting older and how you can make that a little bit funny. It looks at what it’s like to retire and not have a day job and what you do with your time.” New York Magazine says, “…the audiobook version of Calypso will be the perfect travel companion during road trips and getaways this spring and beyond.”