Learning to do improv 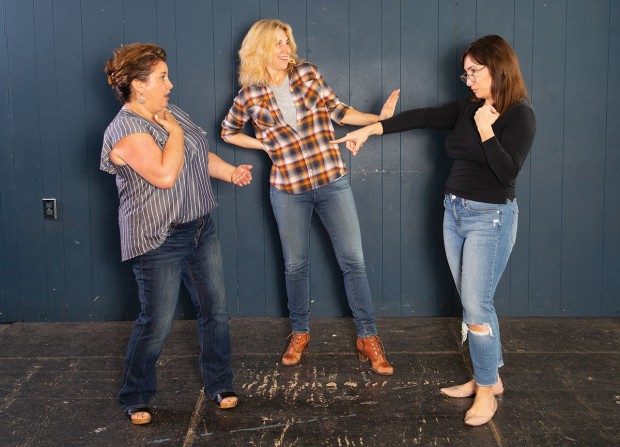 You know the person who, seeing a local TV news crew on the street, stands in sight of the camera and waves to the viewers at home?

I am not that person.

I have no theatrical experience and wasn’t looking to get any. While I didn’t have a phobia about public speaking, exactly, I never did it voluntarily either. In the grand scheme of things, getting up in front of people was right there on the enjoyment scale with getting my teeth drilled.

So, what was I doing up on a stage, singing a television sitcom theme song, the words to which I was making up as I went along?

(To the tune of the song from Gilligan’s Island, no less?)

Improv is, basically, unscripted theater. The people on stage are making things up on the spot. They are hoping it will be funny.

Houston is home to at least three improv theaters: CSz Houston (short for ComedySportz, the name of one of its regular shows), Station Theater and Beta Theater. One home-grown improv team, Can’t Tell Us Nothing, won a national competition in 2018. There is a Houston Meet-Up group for improvisers (also stand-up comics) with almost 800 members. There’s an annual improv festival, the Trill Comedy Festival, usually held every October.

There are plenty of opportunities in Houston to see improv performed. Both Station and CSz have regular evening shows on the weekends. Beta Theater has shows every Tuesday evening at Shoeshine Charley’s Big Top Lounge. They all also offer classes.

Which is why I was up on that stage. My husband and I are currently in a Level 4 (out of 5) class at Station Theater. We started when one of our kids wanted to take an improv class but hesitated to do it alone. But now he’s long gone, off to college, and my husband and I continue to do it.

Because, believe it or not, it’s fun. I’m not the only one who thinks so.

Lisa Beckman of West U started taking improv classes, at CSz Houston and Station, about seven years ago, when her children were small. “I was spending a lot of time with kids,” she explains. “Everything was kid-centric.” She’s now on several improv teams, including ones with the people from the classes she originally took.

Making up a story with like-minded people can feel like the pretend play you did as a kid. When improvisers perform or practice, it is called “playing.” What they are doing are “games.”

But just like the play of children, improv is also a learning experience. There are very few things in life that you do without some advance preparation. Need to ask for a raise at work? You probably rehearse what you’re going to say. Want to flirt with that person you see at Starbucks every morning? You’ve thought about it (hopefully) before you approach them.

Not so with improv. Maybe you are given one of the hundreds of improv games to play (in “short-form” improv). Maybe you ask the audience for a word to base your improv on, or your improv partner has just said the most outlandish thing you’ve ever heard (in “long-form” improv). And now, right now, you need to respond. And it’s better (really) if you don’t think too much about it.

“I ‘yes and’ my husband and my children,” says Beckman. “You listen, you accept, and you add. It’s really good for thinking on your feet. It helps a lot in business, in sales, with small talk, with personal relationships.”

It can also do wonders for your confidence. Brooke Behrens, also of West U, credits doing improv with her recent decision to apply to law school at the age of 40.

At the end of each level of classes at Station, the class puts on a performance, their recital. Brooke’s Level 1 recital was this past July. “I invited all my friends,” she says. (On the other hand, when I have a recital, I tell no one.)

“I was so nervous. I have never been so nervous,” says Behrens. But the recital went well and Behrens was left feeling “like I could fly,” she says.

“Improv is not about learning how to be witty or funny,” says Anderson of Station Theater, which offers a free half-hour intro class every Friday at 7 that includes entry into that night's show (register beforehand). “It’s about taking away the barrier that makes you hesitate and not say what occurs to you. If you say those things, you are going to be funny. You just need to have faith in yourself to do it.”

Improv can also be a great way to meet people. The Houston improv community is tight-knit. Improvisers often take classes and perform at multiple theaters. CSz Houston and Station have a reciprocal arrangement: If you take classes up to Level 4 at one, you can start at Level 2 at the other. (The two theaters teach different forms of improv.) While people do come and go as they work their way through the levels, you get to know your classmates, helping each other out on stage each week and learning about each other through the references each makes while playing. 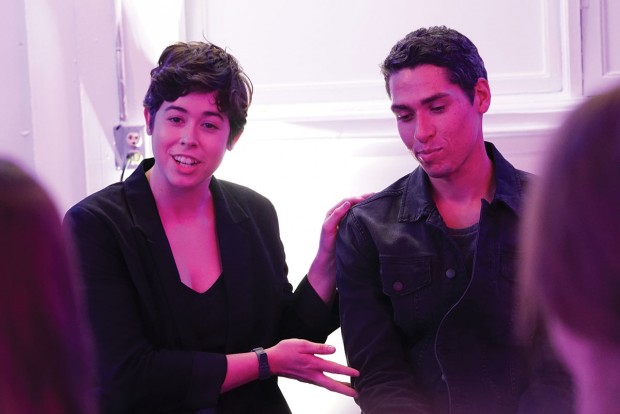 Astrid Lange, who lived in Houston from the eighth grade, attending St. John’s School, until she left for college, recently returned after several years and after living abroad. She decided to look into the local improv scene, joining the Meetup group, taking classes at Station, auditioning at CSz Houston for its professional team. She spends, she figures, at least 16 hours per week at Station, taking two classes, watching performances, going to jam sessions, rehearsing with the teams she’s on. She hosts shows, works the door, works as a technician for shows. She is now working on connecting the Houston improv community to international teams and improv events.

The theaters do differ in some ways.

Most of CSz Houston’s shows, for example, are clean and family-friendly. This is not usually the case with improv. Generally, you will hear some F-bombs and sexual innuendos at an improv show. Another difference: CSz Houston does short-form improv, while the other two focus on long-form.

Short-form improv, best known from the television show Whose Line Is It Anyway?, is more structured. A short-form improv show is run by a host who introduces the games, each lasting a few minutes, that the improvisers will play. For example, in a recent CSz Houston show, the improvisers played a game called “Five Things.” Two of them left the stage so they couldn’t hear, and the host solicited a list of five different, disparate words from the audience. When the two came back, their teammates had only a few minutes to convey those five words to them. The catch: They could only speak in gibberish and use mime. (They succeeded.)

In long-form improv, the scenes last longer and the games aren’t pre-determined. At the start of a scene, one of the players simply starts by saying something, and through “yes, and,” the improvisers create a world, their characters and the game they are playing as they go.

When you are doing improv, particularly long-form, you can bomb. Boy, can you bomb. In fact, when you are doing a scene, your teammates stand ready to run across the stage, doing a “sweep.” This signals the scene has ended, whether it’s a good scene ending on a high note or a bad scene being put out of its misery.

The thing you discover, though, is that the possibility of bombing doesn’t matter.

For instance, often a reference is made on stage to something you’ve never heard of. (Apparently, my younger teammates and I don’t watch the same TV or listen to the same music.) This can still make for a great scene, though.

At one of my recitals, one player asked another what famous author he was. He blurted out, “George R.R. Martin,” but turns out he didn’t know anything about Martin, including what he had written. (Game of Thrones.) The joke, or the game, of the scene became seeing how he was going to handle that. For one thing, he insisted, throughout the scene, on being referred to by the whole name, “George R.R. Martin,” because those middle initials must be very important, right?

For me, the challenge of improv (well, one of them) is not to dither. Before you fully know what you are going to say, you must seize the opportunity to say it.

At my last recital, my husband and another teammate had just established that they were two grown men who had spent the last two years at a strict religious retreat and needed to escape.

I grabbed another teammate’s hand and strode on stage. “This retreat is a great place to meet guys,” I told her. “They’re desperate and we can totally own them.”

“Yeah! I’m totally over my bad-boy phase,” she said.

9:00 am to 10:00 am
Location:
Evelyn's Park Conservancy
END_OF_DOCUMENT_TOKEN_TO_BE_REPLACED