The Doorbell Debate: Is the ‘Here’ Text Out to Replace Doorbells? 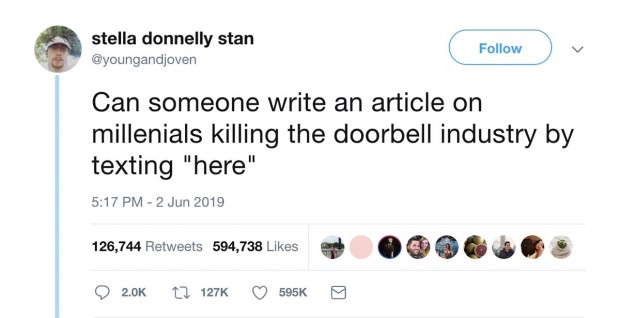 This recent tweet from @youngandjoven sparked a conversation about the value (or lack thereof) of doorbells.

The last time I rang someone’s doorbell was probably when I was a Girl Scout trying to sell Thin Mint cookies to my neighbors. So when I saw this tweet from @youngandjoven, I instantly related to it. These days, I simply text “here.” Why? We millennials have several arguments supporting why texting is better than ringing the bell:

First, we want to make sure the person who answers the door is the person we are trying to see. Why ring the doorbell when you’re trying to reach a specific person in a household?

“I don’t want to ring the bell and then someone I don’t know answers,” says Buzz intern Aarohi Sheth, a rising sophomore at USC. “I just don’t want to deal with that.”

“If it’s someone who I know well, I’ll ring the doorbell because I know their family,” added Buzz intern Grace Goddard, a rising sophomore at The University of Texas at Austin. “But if I don’t, I feel weird ringing the bell. Maybe it’ll be their brother who I’ve never met opening the door, and I don’t know what to say.” 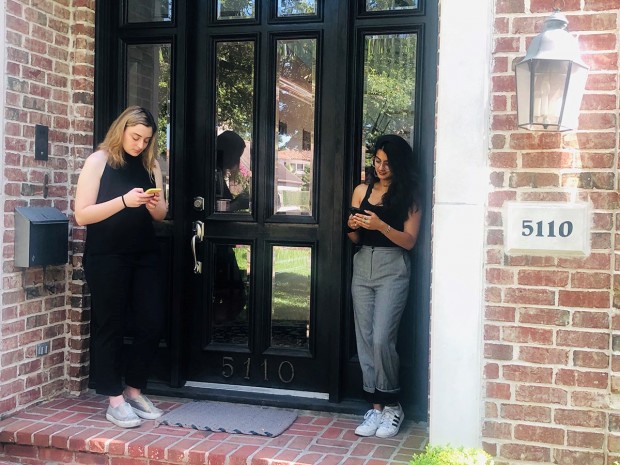 As Grace and Aarohi suggest, we millennials - those of us born between 1981 and 1996 - prefer to avoid unnecessary awkward encounters when possible, and texting instead of ringing is one way to do so.

Second, you never know what kind of doorbell someone has. Some people have installed “smart doorbells” that have IP technology, connecting the doorbell to a camera and microphone. I don’t know about you, but I  would rather not have the image of me checking whether I have anything between my teeth caught on camera for everyone in the house to see.

Third, many of us have pets who become riled up when the doorbell rings. When my dog Pearl hears a doorbell–even if it’s coming from a TV show on my laptop–she goes berserk. I haven’t managed to train her to stop barking on command, so a ring of the doorbell prompts a persistent howling. No, thank you to that.

Fourth, let’s face it, sometimes doorbells simply don’t work. So why not alert the person of your arrival via text? Everyone has their phones right next to them these days anyway.

If these reasons aren’t enough to convince you to text instead of ring the doorbell, take a look at the thousands of Twitter responses from users, many of whom shared why they favor texting over ringing the bell. One user commented “The doorbell legit scares me now. I jump every time. It just seems so aggressive now when you could just text.”  (Linds Gray @urfeverdream).

I know that some members of the Baby Boomer generation - those born between 1946 and 1964 - who are reading this may think we millennials are silly. They may think we rely on our phones too much and we should just go ahead and ring the doorbell. It’s not aggressive. It’s there to be rung.

“If you are here, whether I am expecting you or not, just ring the doorbell,” says Annie Banerjee, a lawyer and member of the Baby Boomer generation who lives in Tanglewood. “Don’t disturb me with a text that I have to reply to.”

Annie’s point is well-taken– when I receive a text saying “here,” I feel compelled to type a response saying, “be right there” or “I’m coming.” I personally am not bothered by this, but I can see how someone might find it annoying.

Still, I would venture to guess that Annie– and the majority of other members of GenX and the Baby Boomer generation–will soon start texting “here” instead of ringing the bell, if they don’t already. After all, many people in that generation were similarly skeptical of their teenage kids who were constantly texting or pulling up YouTube videos on their phones. Now, studies are finding that parents are growing equally, if not more, addicted to their phones as their teenage kids.

At the end of the day, the doorbell debate is simply another indicator that communication methods are changing. And even if GenX and Baby Boomers find us millennials a bit crazy, past trends indicate that they’ll eventually jump on board and do away with doorbells too.

Annie recalls that when touch phones first came out, she was using a Blackberry phone and felt hesitant to transition to a touch screen. “I didn’t think I’d be able to use one,” she says. Now, Annie is an Android user, and she laughs while thinking back to the days of the BlackBerry phone.

Just like the touch screen initially seemed strange, the “here” text may seem foreign upon first seeing it. But, who knows, a few years from now, the doorbell could be a relic of the past.