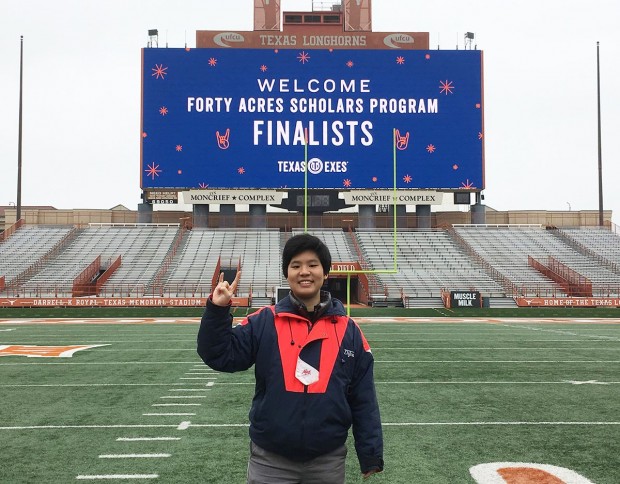 When Chris Wang found out she won the Forty Acres Scholarship, she “just hugged [her] mom, crying tears of joy, periodically saying ‘yes!’” She will be in the Computer Science Honors program and the Business Honors program at UT, and she also plans to minor in Spanish.

It was spring break, and Roosh Bhosale, a senior at St. John’s School at the time, was more than 5,000 miles away from home, watching the famous Don Giovanni opera in Prague with his family. Meanwhile, the Director of Scholarships for UT’s Alumni Association was dialing Roosh’s phone number, trying to deliver an important message: Roosh was selected as one of 15 winners of the prestigious Forty Acres Scholarship Program, an alumni-sponsored merit-based award, which would grant him a full-ride to The University of Texas at Austin.

Roosh had his phone turned off during the opera, of course, and it was only when he exited the Prague State Opera that he realized he had two missed calls from an Austin, TX area code. His phone detected the number and said it was “Maybe: Kristy Parks,” from UT’s Alumni Association, Texas Exes, so Roosh had an inkling that the call was about the Forty Acres Scholarship, since he had already been selected as a finalist. The finalists were alerted that they would receive a phone call if selected and would otherwise receive an email.

“I was freaking out because I thought they’d give the scholarship away if I didn’t call back right away,” Roosh said. Unfortunately, Roosh didn’t have cell service and couldn’t immediately return Kristy’s call. 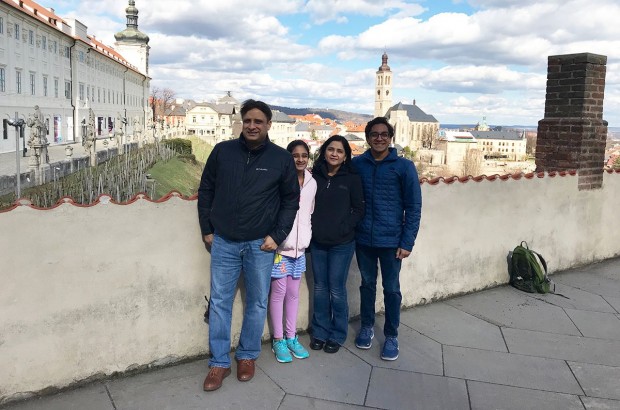 Roosh Bhosale was traveling with his family in Europe when he found out he was selected for the Forty Acres Scholarship. Here, Roosh (right) is pictured with (from left) his dad Ranjit Bhosale, mom Priya Bhosale and sister Hrishika Bhosale in Kutná Hora, a town in the Czech Republic.

Once he returned to his hotel, though, Kristy called a third time, and Roosh was able to answer and receive the good news. “When she actually told me, I was so shocked, I was just speechless,” Roosh recalled.

A Bellaire resident who graduated from St. John’s this May, Roosh first applied to the scholarship last year after his mom suggested he do so. The scholarship not only covers students’ tuition, books and living expenses, but it also includes organized programming, so the scholars can get to know one another, and it offer additional funds for personal and professional development. As a part of the application process, Roosh had to write an essay about how he would use UT’s resources to solve a problem in the world. Roosh decided to write about combatting water-borne illnesses such as diarrhea by improving waste water treatment.

“We take clean water for granted and many people don’t have access to it,” Roosh said. “Over a million people die from diarrhea every year.”

Roosh submitted the application last fall and found out he was a semi-finalist in February. He completed a phone interview and, later that month, visited UT’s campus for a full weekend of in-person interviews. More than 4,000 students applied for the scholarship program, and 54 finalists were selected. From that pool, only 15 students were accepted as Forty Acres Scholars.

Roosh says he ultimately chose to accept the scholarship and attend UT because it would take him out of his comfort zone. 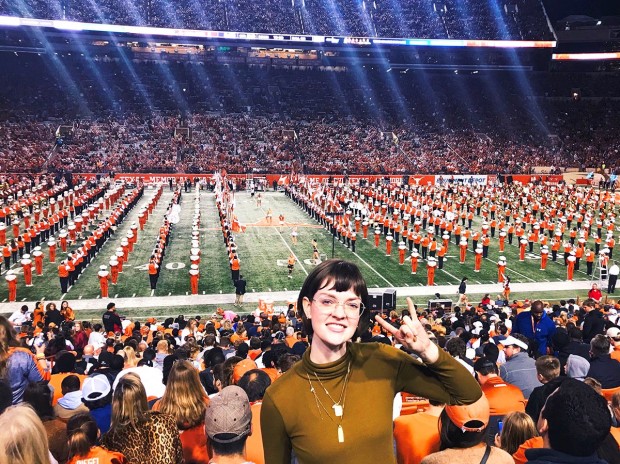 Eliza Pillsbury graduated from Kinder HPSVA and plans to major in journalism and Plan II while at UT.

“I’m really excited about experiencing a big school for the first time,” said Roosh, who has attended SJS since first grade. “I was considering a lot of smaller schools, but in the end, I chose UT because of how different it is from the experiences I’ve had before.”

Roosh is interested in pursuing medicine, but he has a broad array of interests, from economics and neuroscience to Spanish and Arabic. He hopes to delve into all of these subjects while in college.

Editor’s Note: See where more Buzz-area graduates from the Class of 2019 are heading to college in our annual “Where are they headed?” article. 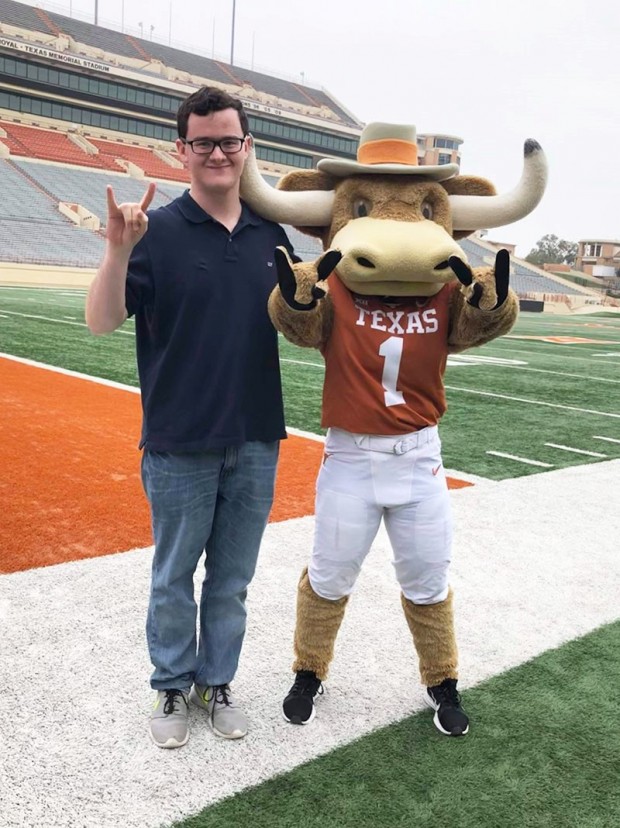 Strake Jesuit graduate Joseph Dowdall plans to major in business honors and Plan II with minors in linguistics and economics. 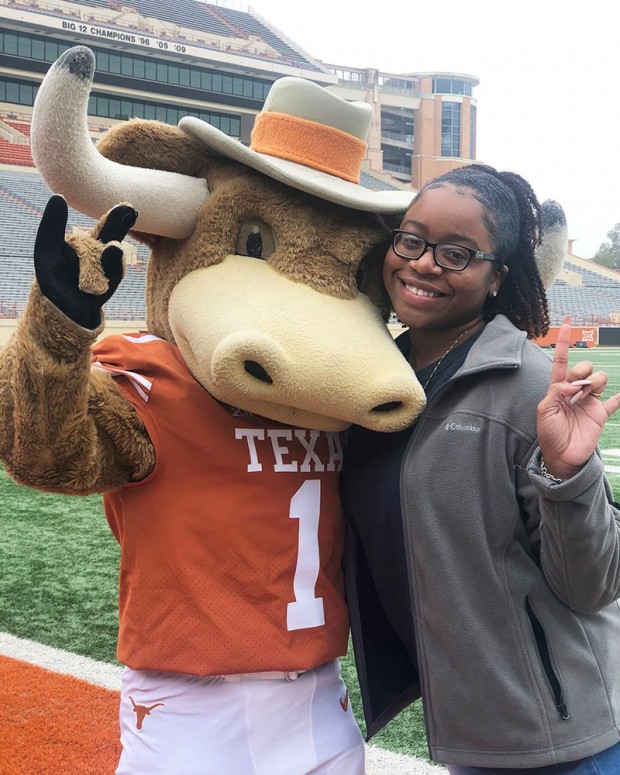 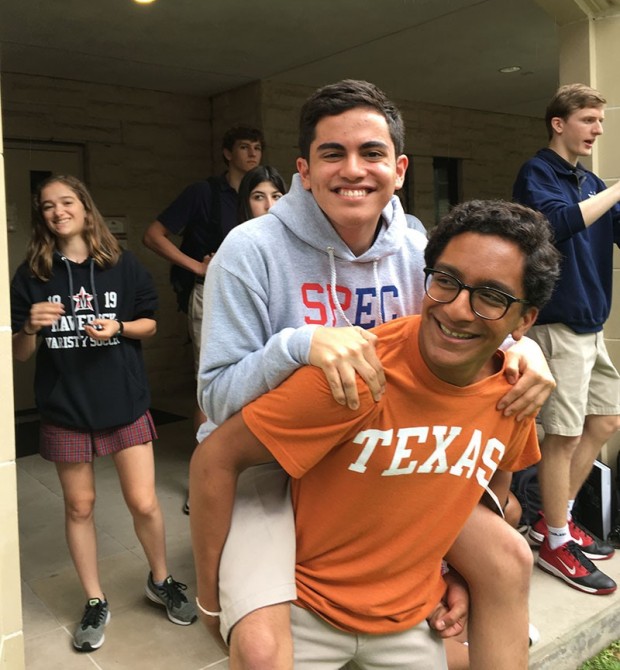 Roosh Bhosale enjoys some of his final days as a student at St. John’s School along with his friend Matthew Yekell (on back), a rising senior.