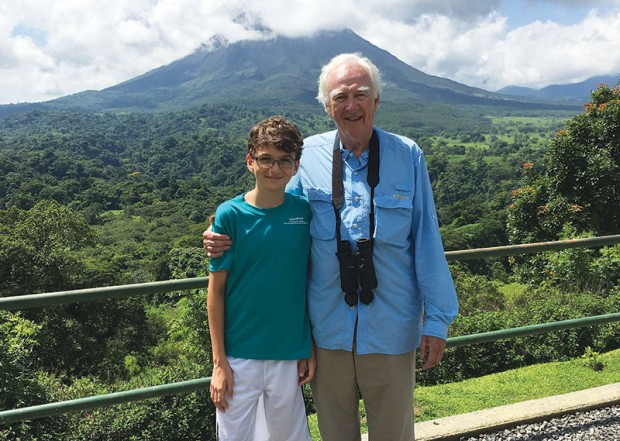 TICO TRAVELS William (at left) and Wyche Fowler, a former U.S. senator and diplomat, enjoyed one of their first adventures together in Costa Rica, where they explored cloud forests, volcanos and beaches.

Wyche and William Fowler are like most fathers and sons in that they like to share a good adventure. In other ways, they’re in a category of their own.

Wyche is a former U.S. Senator who resides part-time in his native Georgia and part-time in West U, teaching at Rice University so that he can be closer to his son. William is a just barely 15-year-old wise soul and a freshman at Episcopal High School, whose favored travel companions, besides his dad, include scientists and researchers.

Together, the two have created a treasured tradition that they hope to carry on for many years more: a series of journeys into the wild, to learn about and appreciate nature in all its glory.

“I wanted to spend some quality time where there was just the two of us,” said Wyche. “In this commercial shopping mall world that we live in, I did want him to appreciate the glory of the natural world. All of our trips have been outdoors in different environments, in different ecosystems – and, most importantly, fun.”

From the rainforests of Costa Rica to the glaciers of Iceland, and a little closer to home but just as wild, in the backwoods of Colorado and Wyoming, the pair have found some of the Earth’s most special places to immerse themselves and test their mettle against a variety of backdrops.

It’s not that either of them is the rugged outdoors type – three days of horseback riding in the Rockies left them saddle sore and bleeding; but they are aware of the vanishing forests and the shrinking glaciers, and they want to experience those together, while there is still time to see them in their current state. 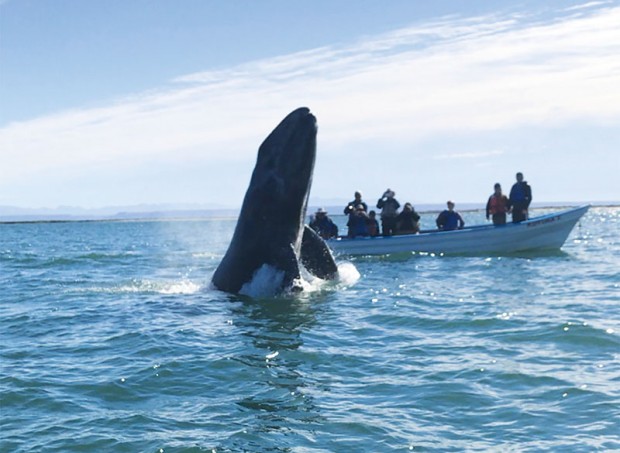 Watching a whale breach alongside your boat is one of the great experiences of a lifetime.

Most recently, during this year’s Spring Break, they were able to accompany an epic whale-watching expedition in the remote San Ignacio Lagoon of Baja California, one of three lagoons on the southwest coast of Baja – and the only one that remains undeveloped – that are the winter home of the gray whale. The whales take refuge from the high seas in these shallow, warm waters to care for their baby calves. The lagoon is within the El Vizcaino Biosphere Reserve, designated a Biosphere Reserve and UNESCO World Heritage Site.

Getting there was an adventure in itself, beginning with San Diego, with a trip to the Old Town and the famous San Diego Zoo; there they met their guides and took a shuttle over to Tijuana, and then a 3½-hour flight on a Embraer twin-engine 10-seater right to their campsite.

“It’s as close as you’re going to get to being a bird,” said Will, still a little bit exhilarated from the experience.

Air taxis fly lower than jets, at around 10,000 feet, so you can see everything, said Wyche.

“You could see for quite a while the Pacific Ocean over on the right and the Sea of Cortez on the left, and we were flying over the spine of the Mexican mountains through the Baja Peninsula.”

At the end of the flight they landed on a dirt strip in the middle of nowhere, with nothing but a couple of wooden shacks. From there they took a shuttle and then a boat to the campsite.

“It’s actually where the desert meets the ocean,” said William. “You just walk out of your tent and take a seat, and you can watch whales from your seat. The stars come out after the sun goes down – there’s no light pollution for 600 miles. It’s about as away from the world as you can get.”

But this trip would involve so much more than sitting on the shore. It was a full-immersion experience, shared with marine biologists, oceanographers, naturalists and other types of researchers.

Twice a day they would board a panga, a light eight-person boat, and head out into the lagoon to observe the gray whales – named by John Edward Gray in 1865.

“We’d go out not even five minutes and we’d see one – and you could go up to it. But you can’t chase the whales, you have to shut the motor off. The babies come close and they might get hit by it.”

Some of the whales – about 10 percent, according to William – are known as “friendlies,” who actually seek out human interaction. The peak moment, which people come from all over the world to experience, is when they come close enough to touch – or in many cases, to kiss, according to Alice Short of the Los Angeles Times.

“One whale came up right in front of my Dad – and he was kind of shocked at first, but then he just grabbed him with his two arms and gave him a big whale hug,” recalls Will. “I reached over and touched it, but he really got a faceful of gray whale.” 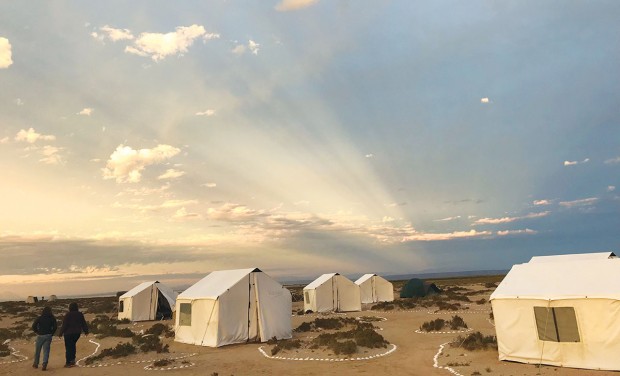 Sunrises and sunsets on the Laguna de San Ignacio were equally unforgettable.

Wyche chuckled at the recollection. “It was a special moment in my life. I was so shocked – I grabbed him with both hands, and everyone on the boat said, ‘Oh my goodness – he just hugged a whale.”

The lasting impression was not what one might expect. “I can tell you one thing, they have bad breath,” said Wyche. “We could smell it through the blowhole because it had been eating all that fish – it’s a distinctive smell.”

On a more serious note, the pair will never forget watching the gentle giants “spy-hop,” or emerge up to the level of the eye to take a look around. And watching them breach, especially from the water, was awe-inspiring.

“They’ll come up three-quarters and sometimes turn sideways and slap down on their side,” said Wyche. “It is colossal when you see them at any time, but many times they were only 40 or 50 feet from our boat, and it’s terrifying and astounding also.”

Adult gray whales grow to an average of 50 feet in length, while babies are born at around 1,000 pounds. They get all their nourishment from their mother for a couple of months, but after three or four weeks they weigh over a ton, just from their mother’s milk.

In the old days, when fishermen would go out to hunt the whales, the mothers would come out of the water and land on the boat, smashing it along with everyone in it. But those days are long past, and nowadays these humans and whales seek only an unforgettable inter-species connection.

The sunsets were unforgettable, as were the night skies. They’d fall asleep to the sound of tents flapping in the wind, and every now and then they’d wake up to a calm space where they could hear the whales coming up.

“You could hear blowholes all night long,” said Will.

From jungle to glaciers to Wild West

The pair’s first outing was to Wyoming, when Will was just 11. It was in August, but the mountain chill was a harsh surprise. “It went down to 23 degrees at night, and we were sleeping in tents on the ground,” recalled Wyche, laughing at the memory. “I gave Will my blankets, and I almost froze to death.”

It was a great adventure, three days on horseback winding through thick forest and rough terrain. It was harder for Wyche, who hadn’t been on a horse in 20 years, unlike William, who had been on several recent horseback outings.

“I remember how bloody we were, because the horses brush up against the brush that has a lot of snags and broken off limbs – we were getting stabbed every 10 minutes or so,” said Wyche. “It was a little scary for me – we had streams to cross where the horses would crouch and leap – and thankfully neither of us fell off.” 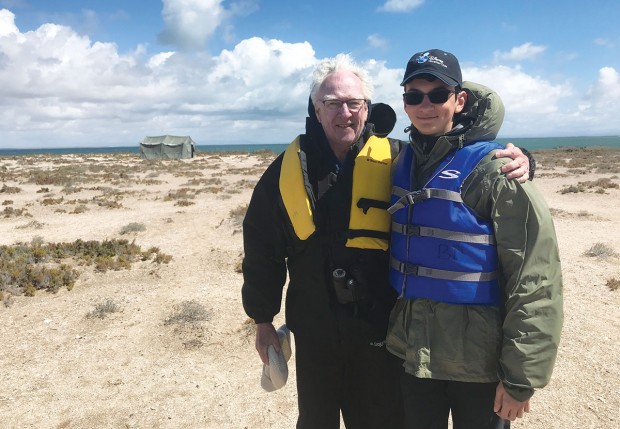 Wyche (at left) and William Fowler enjoyed their fourth deep immersion in the natural world together with a whale-watching expedition on the Laguna de San Ignacio in Baja California.

The next year they chose Costa Rica, for its spectacular cloud forests filled with wildlife and its colorful and friendly culture. William loved the giant tree sloths and the toucans, the live volcano and the mist that draped over the mountains. The football-length swinging foot bridges over the gulches were something Wyche could have lived without, but for William, they were a blast.

The following year they chose Iceland, with hopes of observing the elusive aurora borealis.  As nature lovers, they also were eager to experience the island nation’s unique geology and geography, and were impressed with its strong green ethic – its energy is all renewable, and its culture is highly environmentally sensitive.

Up there with the northern lights for William was the chance to strap on crampons and use an ice pick to climb a glacier – he was all ready to sign up for pickaxe and climbing school, but Dad didn’t sign on for that one.

After three nighttime outings to see the aurora borealis, they almost gave up – cloud cover wasn’t letting anything through. But as luck would have it, the clouds parted at around 1 a.m. on the last night, giving them the light show of their lives.

The journeys have given them much to ponder – for Wyche, who leaves behind a legacy as a champion of environmental legislation, and for William, who will live with the consequences of the political system’s successes and failures.

“For me, I’m pretty young, and all these natural wonders of the world – glaciers and tropical rainforest, for instance – are diminishing, and not so slowly. We wanted to explore these different spots that may not be around when I’m an adult.”

It’s sad, agreed Wyche – but the journeys themselves were not, and he’s pleased with how they’ve been turning out.

“It’s one thing being a father going to baseball game and to Dave & Buster’s. It’s another thing to go to some of these unique places and to share those experiences together – in my case, to see it through his eyes. To see him ask questions, and learn from the scientists about the whales, for instance, and see it for himself. So it’s me learning more about him, and him learning about the world around us.”