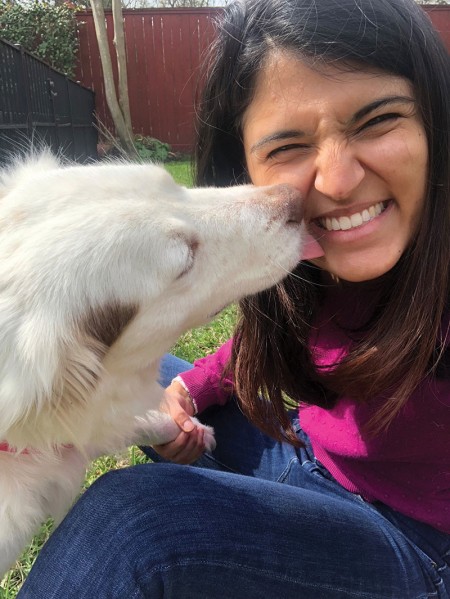 THE PERFECT PAIR After returning to her hometown of Bellaire, Pooja Salhotra adopted 2-year-old Pearl in February, and they’ve been inseparable ever since. (Photo: Pooja Salhotra)

When the in-flight safety video flipped on, the reality of my situation sunk in. It was my 25th birthday, and instead of eating cake and sipping champagne with friends, I was sandwiched between two strangers on a flight from Houston to Boston.

As I sat in transit between the comforts of home and Harvard Law School – an institution that brought out doubts and fears I never knew I held – I blasted music on my headphones and made a birthday wish that 25 would become more than a quarter-life crisis.

Let me back up.

One week earlier, I had packed a suitcase and dragged myself home to Texas. I was four weeks into my first semester of law school at Harvard, and things were not going as smoothly as I had hoped. Though I had spent the first two weeks enamored with brilliant professors and engaged in new classes and non-stop events, I was soon drowning in reading and paralyzed by a constant fear of the infamous “cold-call” during class. I’d sit on the edge of my seat, dreading the moment when I would be caught dumbstruck by a professor’s question. I was scared of failing to live up to Harvard’s standards and failing to live up to my own expectations for myself.

Adding to the academic workload, the mind-boggling array of extra-curricular activities, the looming summer-internship applications and the rush to find a new best friend pulled me in different directions, testing my limits.

Slowly, I felt myself spiraling. When I tried to read cases, my mind rushed with thoughts, questioning my place at Harvard. I spent nights lying awake, unable to fall asleep as my mind raced, too anxious to rest despite feeling exhausted from the busy days.

Psychologists describe the relationship between stress and performance with the “Yerkes-Dodson Law,” which dictates that performance increases with physiological/mental arousal, but only up to a certain point. The relationship resembles a bell curve, with the peak indicating the optimal level of stress. If I had to pinpoint myself on that curve during those first few weeks of law school, I was well past the peak. I was probably at the right tail of the curve, harboring excessive stress and experiencing low performance.

I tried to talk myself out of this state, but my body and mind wouldn’t let up.

I decided to go home. I told my parents I was coming for a couple days, but in reality, I wasn’t sure I would go back. In Houston, I found myself thankful for home-cooked meals and words of support from family, but I was soon itching to go back to school. After having spent months studying for the LSAT and giving up a great job to go to law school, wouldn’t it be a waste to give it all up?

From a young age, cultural, societal and familial norms told me I was supposed to aim for graduate school and secure a stable, well-paying job with opportunity to rise – in medicine, law or business. Those were the options. My parents both have doctorates in scientific fields, and my brother holds a law degree from Harvard. Between the three of them, they have attended four of the most prestigious academic institutions in the world.

And I was following that same path. After graduating from St. John’s School in 2012, I went on to Yale University, where I studied psychology and economics – psychology because I loved it and economics because it was more practical.

My high grades earned me a marketing job at PepsiCo, but within my first year there, I was already looking ahead to graduate school. I felt unsatisfied in a job where decisions were motivated by profit margins, and many of my peers were thinking about applying to graduate school. Without knowing exactly what I wanted to do, I decided on law school. In a world with innumerable problems, I knew I wanted to use my education to make a social impact. I also wanted my career to align with my personal values. Law school seemed like the best way to learn tools and acquire the credentials to begin a meaningful career.

After reaching that decision in 2017, I wasn’t ready to throw in the towel just because law school was hard. So with a meditation book and mild anxiety medication in hand, I booked a flight back to Boston and found myself sitting in transit on my 25th birthday.

Back at Harvard, I made it through another week and was relieved when fall break rolled around. I spent the break in the empty library, catching up on assignments. But while my classmates returned from break rejuvenated, I came back drained. I felt as if I had spent the long weekend digging myself out of a deep hole and that, just when I made it to ground level, someone had dumped a truckload of dirt over my head. 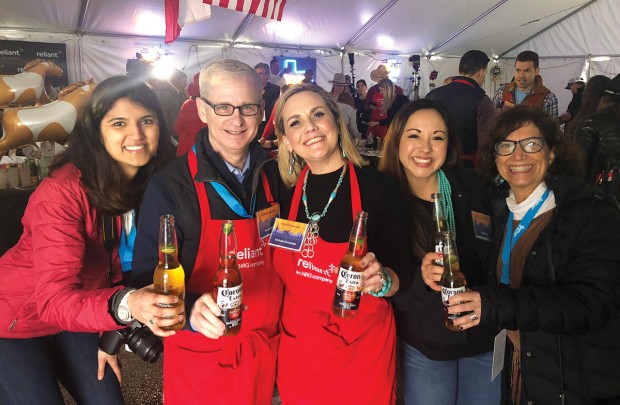 Once again, I was inching past the peak of the Yerkes-Dodson curve. I could barely focus on readings, and my mind wandered during class. I knew it was a privilege to be at Harvard and that many people vied to be in my position. But I couldn’t escape the feeling that this wasn’t what I was supposed to be doing and that, no matter how prestigious the law school was or how hard I had worked to earn my place there, something was not quite right.

During those tense weeks, I’d often ponder all I had given up on in order to attend law school – the friends I hadn’t spoken to in weeks, the family group chat I had silenced on my phone because my exams would conflict with the family wedding they were discussing. I started to ask whether I was willing to give up on things I cared about to strive for a legal degree. Why did I decide I wanted to be a lawyer, anyway?

Over the next week, I agonized over whether or not to stay at Harvard. Since middle school, I’d been a robot, programmed to work hard on each assignment in order to earn high grades and gain admission into a top school. In college, I worked doggedly to achieve a high GPA and find a respected job. After a year spent working, it was back to the books to study for the LSAT and apply to law schools. Even after I applied, I took no time off. The idea of doing so seemed absurd. Instead, I secured an internship at a legal non-profit in NYC and found side jobs to earn some money.

For days, I weighed the pros and cons of staying vs. leaving Harvard. I desperately wanted to take time off to decompress and carefully consider my career goals. But I also didn’t want to jump off the treadmill while everyone else powered ahead. I sought advice from fellow students, friends and family, and I even confided in professors. But there didn’t seem to be a “right” answer. If I left, I had no idea what I would do with myself, and if I stayed, I was committing to a grueling semester for a career I wasn’t 100 percent sold on. I wavered, one day deciding to leave and the next day spending hours in the library to finish reading assignments.

On one Sunday morning in October, I made up my mind. I had just finished my toughest week of the semester, and I had signed up for a Sunday morning yoga class to relax. But the Vinyasa flows that normally brought peace instead amplified my stress. My muscles were contracted and aching, even though I hadn’t worked out in weeks. When the yoga teacher instructed the class to move into Warrior II pose – a position that exudes power and stability – I felt weak and unsettled. My legs trembled, my heart palpitated, and my mind filled with anxious thoughts about school. While the class transitioned to a more challenging pose, I turned to my mat and sat in child’s pose. The room was spinning around me, and something inside of me was screaming that it was time to get out.

I ran out of class into the cold Boston air. I suddenly saw my situation with clarity. Even an activity that once brought contentment was increasing my frustrations. That morning, I called my family and told them my decision: I was coming home. By Wednesday, Harvard had approved my request for a year-long leave of absence, I’d said goodbye to classmates and professors, packed up my suitcase and returned textbooks to the bookstore.

Within hours, I went from a law student to an unemployed 25 year old with no job prospects, living in my childhood bedroom in Bellaire.

But it was right when I hit rock bottom that things started looking up. I was sitting in my neighborhood Starbucks when I looked up from my computer and spotted a familiar face. Within a moment, I was embracing Joni Hoffman, editor of The Buzz Magazines. I hadn’t seen her since 2012, when I spent the summer interning at the magazine, but we quickly set up a time to meet and talk about a potential job at The Buzz. The following day, I was in the conference room at the magazine’s office, brainstorming story ideas. Within a week, I had written an article that was published online and had become a part of the editorial team.

When I look back on the past year, I’m in awe of all that’s happened. I moved from NYC to Boston to Houston. I transitioned from a non-profit to law school to a community magazine. I turned 25 on an airplane. I made it through lows and celebrated triumphs – training to run a marathon, writing several articles a week, becoming a proud new dog mom.

Perhaps I should know where my life is headed, or at least where I want it to go. I have some ideas, but I have few clear answers. I recently decided to extend my leave of absence from law school for another year, and I plan to continue writing in the meantime. For the first time in my life, I’m not following a path, and I’m refusing to let unspoken rules or societal norms guide my decisions. I don’t know what’s next. It’s a little scary, but I like it.