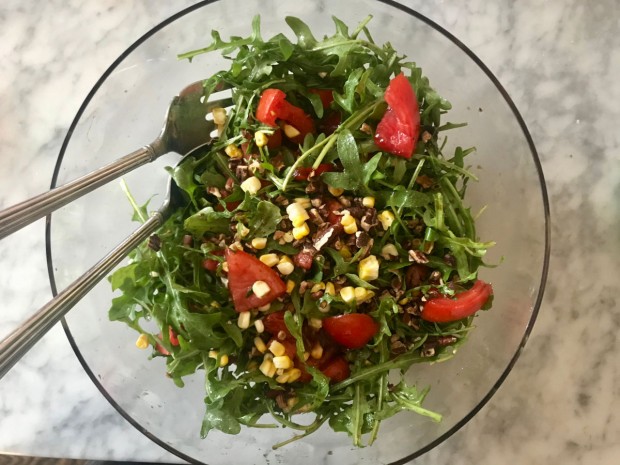 This refreshing salad tastes like bruschetta in a bowl.

I first started making this salad for supper club dinners, pre-children. Then supper club turned into book club, and I kept making the salad. Book club eventually became “come over and have some wine and talk about babies” club, and the salad stuck around. Eventually, though, babies got bigger, and schedules got busier, and all the clubs fizzled out, and there went the salad.

Not too long ago, though, I stumbled on the recipe in my binder and remembered how much we used to love this salad. I’ve got it noted as Arugula, Tomato and Corn Salad – a recipe from Epicurious.com that came from a long-lost restaurant in Atlanta – but once I started making it again, we felt like it was bruschetta in a bowl, hence the new name, Bruschetta Salad.

It’s sort of a big toss of bruschetta topping – vinegary tomatoes, garlic and basil with a little parmesan – plus the additions of corn, pecans and a lot of spicy arugula. Just a great summer salad. And a reminder that everything comes back around, eventually.

Whisk the olive oil, vinegar, basil, diced tomatoes, garlic and rosemary in a small bowl. Season to taste with salt and pepper.

Preheat the broiler. Using your hands, coat the corn with a little bit of olive oil, and sprinkle some salt and pepper on it. Broil the corn on the oven rack until it is browned in spots, turning a couple of times, for about 7 minutes. Cool, and cut the kernels off the cob. Place the corn kernels in a large salad bowl.

Add the arugula, tomatoes and pecans to the corn. Toss the salad with dressing to taste. Season with salt and pepper, and garnish with the parmesan. You will have some extra dressing – use it on another salad, or it’s great as a true bruschetta topping!