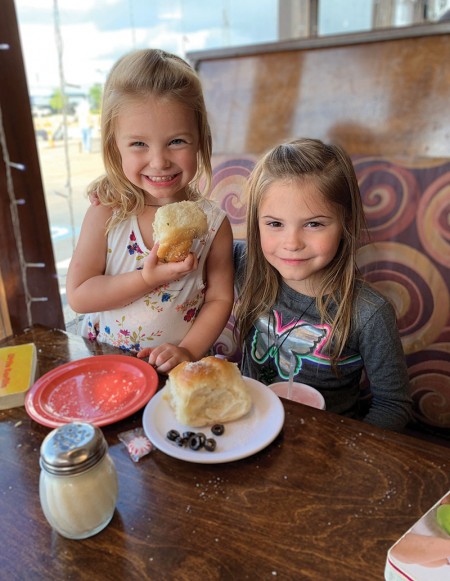 NO RESERVATIONS REQUIRED Sisters Lucia, 2, and Everley Austin, 5, get to go out to eat with their parents Liz and Jeremy at Napoli.

With summer in full swing, longer dinners inside air-conditioned restaurants are a weekly ritual for many Houston families.

On the other hand, long dinners with squirmy, short-attention-span, occasionally loud and rambunctious small children can feel like more of a workout than a relaxing meal for parents.

Veteran parents say to pick a place that’s loud in the first place to cover up any tantrums your toddler might decide to throw (after all, dinnertime means they’re hungry and it’s close to bedtime, so that’s a double reason to throw a fit). But even that strategy doesn’t always work.

One mom of three (who requested to remain anonymous) will never forget taking her crew to a favorite Tex-Mex place (also to remain unnamed, at her request).

Her kids and her friends’ kids were running around the restaurant’s outdoor patio – yes, running – along with lots of other little kids, while parents enjoyed conversation and sipped frozen margaritas. This is a common Friday night scene at this place.

A table of out-of-towners did not get the memo that this restaurant is running-around-kids-friendly and packed with children on Friday nights.

They requested a table on the outside patio, among the kiddie tables. About an hour into dinner, and after many, many eyerolls and whispers purposely directed towards the parents, one of them stood up and approached the adults.

In front of the children, he started berating the parents, telling them to “watch their kids,” whom they said were “ruining their dinner.” The kids watched and listened, with wide eyes. One toddler started crying and ran to his mom. 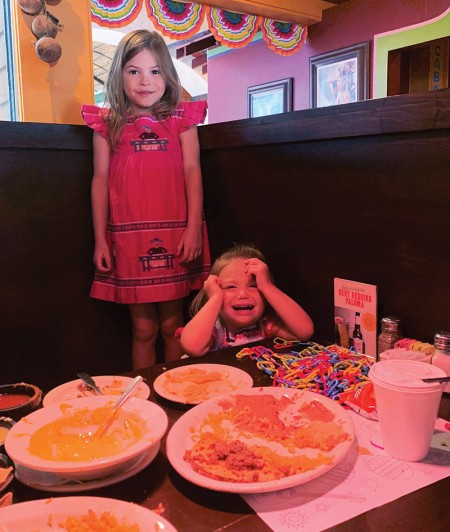 DINING ADVENTURES Lucia Austin is not quite ready to leave her favorite booth at Molina’s.

The parents addressed the angry patron and went home that night with a damper on their evening and a story to tell. They all still dine out, but the mom says she learned to observe who is sitting around their table and keep an eye on their mannerisms. If they seem annoyed, she tells her kids to pipe down and tries to address it before it becomes an issue.

Liz Austin and her husband Jeremy take their daughters, Everley and Lucia, to dine out frequently. “Probably 3-4 times a week with the kids,” she said. “I find that most anywhere is kid-friendly at lunch time but for dinner time, we usually stick to casual places with patio dining, especially if we have a big group.”

Liz said when her girls were babies, it was actually easier to take them to nice restaurants. “But the nicer the restaurant, the earlier we ate,” she said. “We have been known to start family birthday dinners at 4:30 at nicer restaurants out of respect for adult diners that show up later in the evening.”

Liz said now that the girls are older – Everley is 5 and Lucia is 2 – they almost always ask for a booth, and they order their food the moment they sit down so the girls don’t get cranky. “[Booths have] more privacy and space for the kids to move around without leaving their seats,” Liz said. “We bring quiet activities, like crayons, small puzzles, Play-Doh, and shape blocks. We also bring a few lollipops to keep them quiet at the end of the meal while we finish.”

Liz and her family tend to stick to their go-to favorites, although they do venture out to try new places from time to time as well. One kid-friendly favorite is Napoli (14743 Memorial Dr.). “The delicious rolls and grated Parmesan keep the girls busy until their pasta arrives,” said Liz. When they are craving Tex-Mex, the family heads to Molina’s (7901 Westheimer Rd.), where Lucia even has a favorite booth.

Here are some other Buzz parent recommendations for kid-friendly restaurants, many with dedicated children’s play areas. Of course, there are far too many good places in Houston to list them all, but here’s a start:

Relax, enjoy the chaos, and pack your patience.