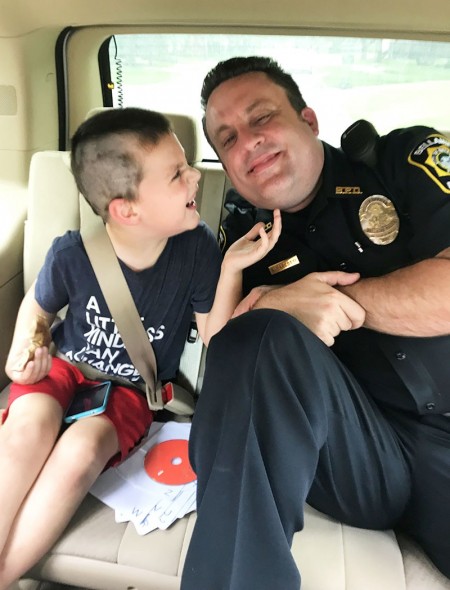 HOME SAFE BELLAIRE Jack Stephens, age 7, has some fun with Bellaire Police Officer Alex Marcotte. Their last time together was scary as Jack had wandered from home, but the incident helped launch a new city-wide program.

Every parent has endured the feeling – split second panic when you lose line of sight on your kid. For parents of children with autism, the ordeal can occur with gut-wrenching regularity.

Liz Selig never knows when her 7-year-old son Jack, who is nonverbal, will wander away. He’s done it before, an inclination made more dangerous by his love of the water.

Anxiety flares as this single mother of two recalls one evening earlier this spring when she saw a Bellaire police officer’s car outside her home.

“I thought Jack was playing in his room. Then my eyes shift to this patrol car, and I saw this little blonde kid in the back seat that looked like Jack, and then I knew. I dropped my phone, and I just bolted toward him.”

Jack had walked to Evergreen Pool in Bellaire a couple of blocks away from their home. She never knew he was gone. It was no easy task for Officer Alex Marcotte to get him home safe.

“He just kept saying pool,” said Marcotte. “He couldn’t say his last name or describe his house. He was getting a little anxious and agitated with all the people around. I asked him to go for a ride in my police car, but he didn’t want to go to my car. I had to physically transport him – kicking and screaming.”

One week after Jack’s incident, another boy in Bellaire with autism wandered from his home. The parents realized he was missing and flooded social media with his photo. He was found safe at the Target in Meyerland, more than a mile from his home and on the other side of Loop 610.

Not all incidents end without heartbreak. Earlier this year, a 7-year-old boy with autism slipped undetected out of his family’s townhome in Texas City. His body was recovered the next day from a nearby retention pond.

It is this type of tragic outcome that parents like Liz and the City of Bellaire are trying to prevent. After hearing that Bellaire first responders had no way to identify residents with special needs, Liz advocated for a program similar to one she learned about in Florida. The city answered and, this summer, launched Home Safe Bellaire.

“The Home Safe program will be specific to people with autism and dementia, people who are nonverbal and who might wander off. We can flag addresses if we know someone wanders from the house,” said Edwards. “The information will tell us where the child likes to play, if they like the water or trains, any likes, dislikes and triggers. It’s one extra safety precaution to keep our citizens safe. Immediately we’ll have a picture of the person, and all dispatched officers can start looking for him without any delays.”

In Jack’s case, a quick-thinking lifeguard at the Evergreen pool stopped him before he could jump into the water.

“I noticed he had no shoes on, and I knew something was off because I asked him where his parents were, and he couldn’t answer that,” said Kimberly Landry, a lifeguard and full time student at Texas Southern University. Landry stayed with Jack in an office, trying to comfort him, and another lifeguard walked down the street looking for concerned parents.

“What amazes us is how he found his way here. It was all from memory. We knew he definitely had been here before, and he’s definitely smart enough to know where he was going,” said Kimberly.

Officer Marcotte noticed Jack was wearing an Episcopal High School shirt, so he set out to find a matching yard sign. He ended up on the right street, and a neighbor identified Jack.

“I’ve never had experience with autism, directly, but my youngest has Down syndrome. I know it’s tough to be a parent in that situation; it’s a lot to take care of,” said Marcotte. “I asked his mom that if I ever saw him again what are some things that I could say to him to help him.”

Now he and other Bellaire police officers will have the help of the Home Safe Bellaire program. “I was happy to hear that the city was on board with putting this program into action. People who have challenges communicating are the most vulnerable citizens in our community,” Marcotte said. “These are the citizens that we are supposed to help.”

“I’m ecstatic that something positive came out of this scary-as-hell experience,” said Liz. “Now I’m going to work at getting neighboring communities to get on board and the City of Houston.”