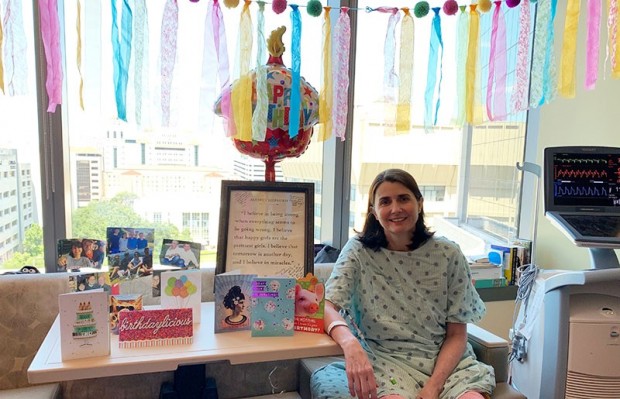 Mandy Nathan will celebrate her birthday on July 26 with well wishes from the community and cupcakes from husband David Nathan. (Photo: David Nathan)

On Thursday mid-day, Mandy Nathan sits in her hospital bed at Houston Methodist after returning from a walk – six laps around the hospital floor. Later, a friend might drop in for a visit. Members of the St. Luke’s Methodist Church visitation team will come by to pray with her. Mandy’s nurses will come to check on her. And her husband David will come by to give her company. He’ll watch the Astros game with her. Or maybe an episode of one of Mandy’s favorite shows, “Stranger Things.”

Over the past nine weeks, Mandy has lived at the hospital as she underwent a series of treatments and now awaits a heart transplant. Mandy suffers from a genetic heart defect that, over the past several years, has caused heart failure and arrhythmias and several mini-strokes. Doctors decided to put her on the heart transplant list on June 12, and they also implanted a “balloon pump” in her chest. Due to complications, the pump was removed and then re-inserted a week later, and what should have been one simple procedure turned into a series of four surgeries. Meanwhile, to increase the likelihood that she can accept a transplant, Mandy has undergone invasive treatments that aim to reduce her antibody levels.

It hardly needs to be said that Mandy, a former Bellaire City Councilwoman, has endured a physically and mentally-taxing ordeal. Still, she’s upbeat. On Thursday – the day before her birthday – her laugh reverberates through the phone receiver and she’s happy to chat with me about her daily schedule, hospital food, even her alma mater, Harvard Law School.

“It’s a constant effort, but you just have to [stay positive],” she says. “Otherwise, I would never get out of bed.”

Recently, Mandy began documenting her experiences in the hospital on CaringBridge, a nonprofit organization that allows people facing medical conditions to communicate through an online platform. This is new for Mandy. Although she has a Facebook account, she hardly touches it and does not like posting about herself.  Her first CaringBridge post from July 20 even includes an apology for her being AWOL online:

“I have approximately 400 un-responded to Facebook friend requests from as long ago as nine years (I know, I know, I’m a terrible person),” she writes. “So let me just say, it wasn’t you, it was me, it was all me. So we will have to agree to let bygones be bygones, right?”

Mandy has written four posts thus far. All of them are filled with funny anecdotes about life in a hospital and tidbits of self-deprecating humor. A post that has garnered significant engagement from readers is one about hospital food, entitled, “I Must Have Made the People in the Kitchen Really Angry at Me.”

In it, Mandy dives into three hilarious examples of how the hospital kitchen and food service teams are conspiring against her through, first, “The Blueberry Yogurt Conspiracy,” second, “The No Food For Your Covenant” and third, “Popsicle Protocol,” as she dubs them. “I could have written a whole book just on that,” Mandy says, laughing. “I had to pare it down to three examples.”

Mandy says these posts represent the first time she’s written about herself publicly. She decided to post in order to keep friends and family members updated and to convey that she is doing okay. Meanwhile, Mandy’s husband David is an avid writer. He works as a high school English teacher at St. John’s School as well as the advisor for the high school newspaper, The Review. He’s even authored a book and published several articles.

“I’ve always enjoyed being considered the writer of the family,” David says. “I’m afraid she’s going to steal my thunder on this. She’s really funny and has some interesting stories.”

David says he has been especially grateful for the community’s support over the past several months. Community members organized a Meal Train, where friends can sign up to deliver dinner to David and his two children Zach, 23. and Max, 20, while Mandy remains in the hospital.

“The Meal Train was finally a way we could say, okay, here’s a way to help,” David says. “It’s really gone a long way of just getting through the last few months.”

Mandy jokes on CaringBridge that the food friends are delivering better not be too good, “lest everyone end up disappointed with my cooking when I get home.”

Editor’s Note: If you’d like to sign up for the Meal Train, you can do so here.