We Are the Asteroid III: More than a Mere Traffic Sign 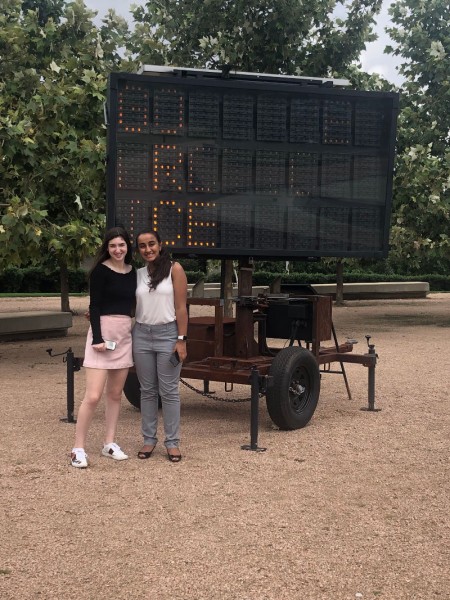 Buzz summer interns Jenna Talisman and Maria Morkas pose in front of We Are the Asteroid III. (Photo: Pooja Salhotra)

When you see an average LED traffic sign on the road, you would assume that the sign would provide helpful information about an obstruction or inconvenience on the road up ahead. Most of the time, you would be right.

But not this time.

As we arrived at the Buffalo Bayou Park at the Wortham Foundation Grove along Allen Parkway, we were greeted by such a traffic sign. At first, we were prompted to “REDUCE SPEED NOW.” What seemed to be an average traffic sign soon turned into an assertive warning about the imminent threat that global warming possesses. With messages like “WE ARE THE ASTEROID”, “GLOBAL WARMING AT WORK” and “TRIASSIC WEATHER AHEAD”, the “We Are the Asteroid III” sign intends to warn drivers about forthcoming planetary conditions, rather than mere road conditions. 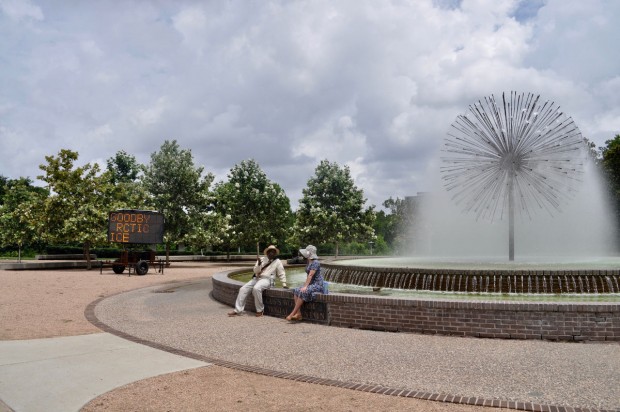 Mark Strum, a pedestrian passing by, said he was initially confused by the presence of the sign. But when he realized the purpose of the art by viewing the accompanying plaque, he said, “That’s pretty cool, as the sign is about the environment and climate change - it’s a warning. The sign probably makes no difference to drivers passing by, though, as they are driving too fast and only see one part of the message.”

Artist Justin Bryce Guariglia brings this repurposed highway sign to life by featuring messages from Rice University professor and philosopher Timothy Morton to call attention to ecological issues and the planetary crisis. Designed to spark conversation and reflection, the sign features epigrams that stem from humor and metaphor in the form of verse. Brooklyn-based Guariglia’s artwork references Anthropocene, the belief that the human impact has a prevalent effect on the ecological situation: both climate and environment. So far, he has positioned similar signs in 50 states across the United States, like Chicago, New York and Oklahoma City. 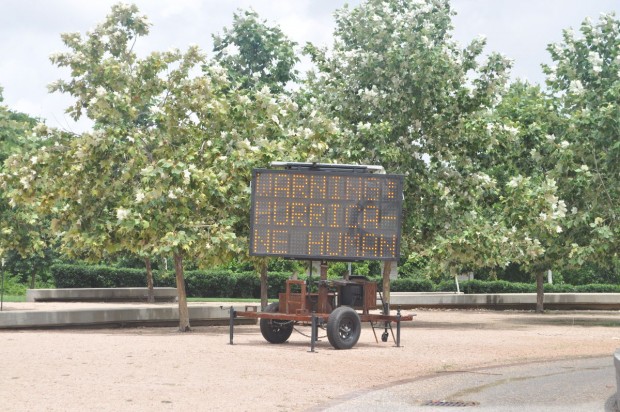 This message features the essence of Anthropocene, the belief that the human impact has a prevalent effect on the ecological situation: both climate and environment. (Photo: Pooja Salhotra)

In an interview with Phong Bui, the artistic director of The Brooklyn Rail, a journal revolving around arts, culture, and politics, Guariglia expressed that “[these signs] would really catch people’s attention as it would be totally unexpected. They are symbols of authority and without even thinking they subconsciously create a limbic response. It was simple, but also rather subversive.” Read more of this interview here.

Reading about this art exhibit online, we, at first, expected more to it. Surprised by the simplicity of the sign and lack of an actual exhibit, we were forced to discuss and contemplate the essential meaning behind the sign. It was simple yet warned about something so grave. The irony was fascinating.

This solar-powered LED message board will be on display through Aug. 31, 2019. Find more information regarding We Are the Asteroid III here.