He ditched the car for a bike 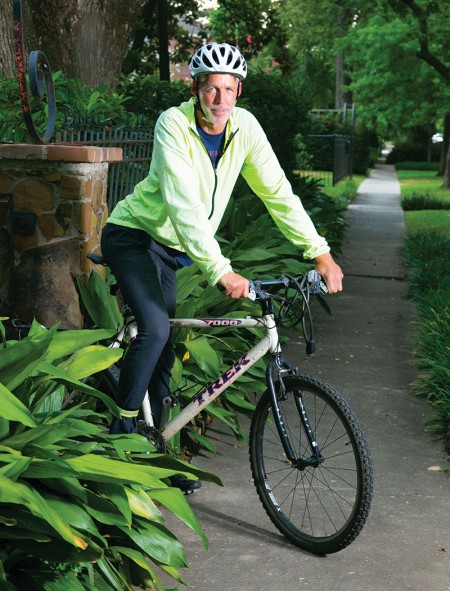 Christopher Knapp rides his bike all over town rather than driving a car. (Photo: lawellphoto.com)

In a sprawling city like Houston, owning a car is the norm. West University resident Christopher Knapp, however, is bucking the trend.

Knapp, who owns a local investment-advising firm, ditched his car one summer after he took to biking around town while his car was in the shop. Now, on a given day, Knapp can be founding cycling to work in Montrose, biking to a local eatery for lunch, or grocery shopping with his backpack in tow. Over the years, he’s found that swapping four wheels for two has helped him cut down on stress and put him in touch with the local community, making him more mindful, present and happier overall.

“Cycling makes me feel more alive and a lot more connected to the city,” Knapp said. “I pay more attention to how I spend my time. I notice and enjoy the patterns of daily life – I’m not just hopping in the car mindlessly. It’s nice not to worry about a car.”

It started in 2017 when Knapp left his car with his mechanic to work on the transmission. Repairs took longer than expected, and instead of renting a car, Knapp decided to bike, walk and use ride shares as needed. When he got his car back, he was sitting in 100-degree weather one day in “mind numbing” traffic dreaming about being on his bike. “I thought to myself, what if I just didn’t do this anymore?”

During a regular visit to his second home in New Mexico, Knapp left his car there, then got a ride back to Texas in a relative’s car. “I remember thinking, wow, maybe this is a new way to live here.”

In Houston, Knapp geared up. He bought lights for his bike and a reflective rain jacket. He joined the Zipcar car-sharing service for when he had meetings outside the city. He learned to buy smaller quantities of food, whatever he could fit into his backpack and his bicycle’s side packs, and he made more frequent trips to the grocery store. He’s found his food is fresher that way. He’s not wasting food like he used to. 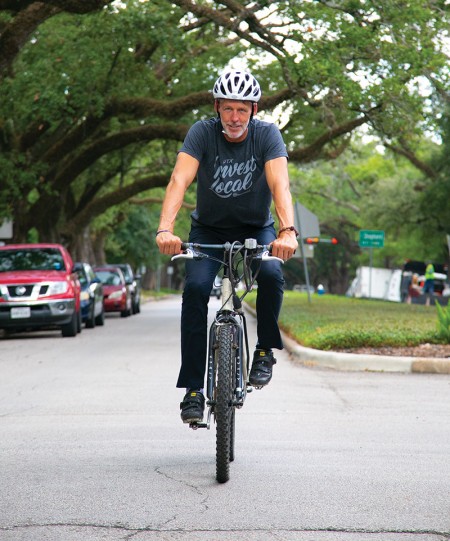 CHOOSING TWO WHEELS Cycling has helped Christopher Knapp to cut down on stress and better connect with his city. (Photo: lawellphoto.com)

Knapp’s transition to cycling coincides with Houston’s push to become a greener city by adding more bike lanes and paths to connect the city’s network of parks. Knapp grew up in Houston and fondly remembers a childhood hopping on his bike after school and exploring his neighborhood with his brother and friends. The friendlier bike culture was a welcome change for Knapp when he returned home after years of living up east.

He lived in New York City in the 1980s when the city started to restore its famed Central Park, and got hooked on walking and biking through the park. Now, in Houston, he serves on the Houston Parks Board.

Since he started biking full-time, Knapp has found he’s more intentional about his days. He thinks more carefully about how he schedules meetings, and he focuses on purchases he needs, not just wants. He’s found that money-wise, he’s broken even, balancing the cost of car insurance, gas, car payments and airport garage parking for frequent business travel with the money he spends on Zipcar and ride shares.

“When you have a car, it’s easy to just get in to do an errand,” Knapp said. “Without a car, you actually think about these decisions.”

He also began to notice businesses in his neighborhood that before he’d fly by in his car. He stopped, got off his bike and he went in. He’s spent more time at neighborhood restaurants since giving up his car.

“When you’re not going 30 miles per hour, you see things you don’t normally see,” he said. “Biking helps you to create a relationship with your city. It’s made me look at the city through a different lens.”

Knapp knows his proximity to work makes his lifestyle possible, a luxury many people don’t have—he’s just a 10-minute bike ride from his office. But, even people who can’t completely abandon their car can use their bikes to explore the city, he says.

There’s a freedom in biking, said Knapp. “Some people might argue not having a car is an impairment to your quality of life, but I think it’s really enhanced mine.”

Chek out “Discovering Houston’s Trailways” by Janvi Pandya for a list of Houston bike trails.

People in this article:
Christopher Knapp
Tags:
Biking, Biking in the city, Commuting on bicycle