Teachings from a school garden 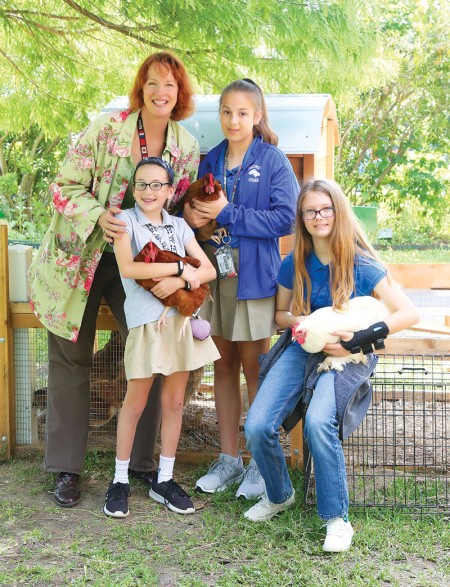 It all started about 13 years ago, when Angela Roth was volunteering at Kolter Elementary School for the kindergarten class of her second daughter, Lauren. “The teacher’s parents were very ill, and the sub didn’t know about kindergarteners very well – so I started hanging out and trying to be helpful,” she recalls. Passionate about plants since childhood, Angela ran across a grant from the Texas Department of Agriculture, and she proposed a Native Texas Alphabet Garden, where every letter of the alphabet was represented by a plant.

It would be the first of many school gardens she would help organize, first at Kolter, and then, years later, at Pin Oak Middle School, where her daughters also attended. She’s helped children plant a pizza garden and a Peter Rabbit garden, sweet potato gardens and butterfly gardens, hydroponic and tower gardens, to name just a few.

Seen another way, one could say it started many years before, with her grandfather, a telegraph operator for the railroad. She never knew him, but somehow he passed along a passion for plants. “I was genetically excited,” she explains with a laugh. Her great-grandmother grew begonias, which fascinated her, and her father brought home a spider plant, which Angela learned to propagate and share. She sold flower bulbs for a school fundraiser and watched as her neighborhood brightened with blooms.

As an adult it would be a while before she could follow that passion, as she spent 15 years in the Navy, leaving as a lieutenant commander. But when she and husband Chris moved to a high rise in London, she found herself with a huge balcony and time. She returned to the horticultural arts with gusto, filling that balcony with flowers. 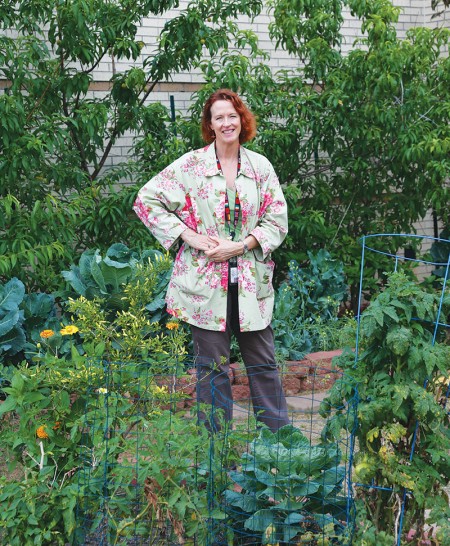 Wherever her gift for growing came from, it has manifested itself in her position as the Urban Agriculture and Farm to Table Cooking instructor for Pin Oak. She has worked with Scouts, students and parent volunteers to transform the space into a veritable Garden of Eden, and is teaching a garden-to-table curriculum. A flock of chickens graces the grounds, along with a fruit orchard and raised beds of herbs, vegetables and flowers. An urban agriculture class teaches the kids to grow the plants, and a cooking class teaches them to transform their produce into tasty dishes. And their Farmers’ Market gives them lessons in entrepreneurism as they raise the money to pay expenses.

To Angela, gardening is a much-needed gateway to nature that today’s children lack.

“When I was growing up, we would go outside and play all summer long – we’d only come in for food. Both of my parents worked and I had three younger siblings to take care of; but really, it was all outside – and we were so healthy.”

Today’s children, by contrast, languish indoors, connected to devices or concerned about heat, humidity and allergies. Angela suspects many of the maladies that feel like allergies are more related to the children’s diets and lack of exposure to the outdoors, which leads to a downward cycle.

“‘No child left inside’ is kind of a neat idea; they talk about people having a nature deficit disorder. Just getting sunshine and appreciating nature is so important,” she said.

Angela teaches heat survival strategies: wearing a hat, staying in the shade, working in the early hours, drinking lots of water. To repel mosquitoes, she uses clothing and plant-based repellents. To clean her classroom, she uses water with a few drops of lavender oil; the kids love to spray each other and learn about the uses of garden herbs.

In the beginning, many children have an intense fear of insects. “Instead of saying, oh, that’s cool, they shriek and overreact; they’re not used to seeing them.”

Isabel “Izzy” Thrash, an incoming eighth grader at Pin Oak, has both of Angela’s classes. 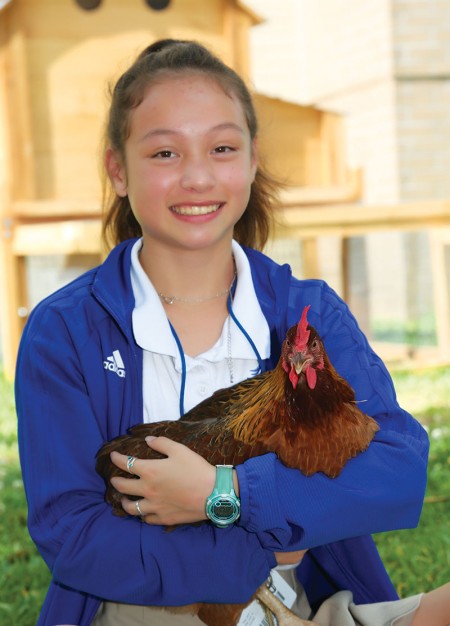 “I was always kind of scared of bugs, except the really good ones, like ladybugs,” she said. “But one day we found a centipede in one of our mulch buckets and I was like – ‘A centipede!’ – and someone else said, ‘Kill it!’ But I was the one stopping them from killing it.”

Riley Tackett, also in eighth grade, has been involved since nearly the beginning, as well as her older sister, Danielle. Her grandmother, who raises chickens, gave a presentation to the first Urban Ag classes, leading to Pin Oak becoming one of very few schools in HISD to have a garden program that includes animals. Now the chickens lay eggs, which can be used in the cooking class and sold to raise money for the garden program.

Riley shared a memory of “one of the most awesome days” in the garden. The chickens were out foraging for insects, as they often are – serving as a natural form of pest control. Suddenly, someone spotted a hawk flying overhead, observing the chickens with what seemed to be a hungry eye.

“Everyone immediately scrambled to find the chickens and get them all into the coop, herd them in and then lock the door so they couldn’t get out, and waiting until that hawk had flown off,” said Riley, “because everyone cared about the chickens, even those who didn’t quite like the chickens.”

Like Izzy, Riley has learned a lot. What first comes to mind is the way she thinks about food and nutrition after taking Angela’s cooking class. “It taught me how to be responsible with my food – it’s good to eat foods that don’t have all those chemicals on it,” she said. “And I learned how to cook food so it’s healthy and safe.”

Growing and then cooking the food brings the lessons home. One of the kids’ favorites is okonomiyaki – a Japanese veggie fritter, which Angela likes to make with collards and carrots. Another favorite is roselle – the tangy flower used to make traditional Mexican agua de jamaica or hibiscus tea. Basil pesto is a huge hit, and the kids love Swiss chard, which serves as wraps for stir fry of broccoli and bell peppers and tomatoes. 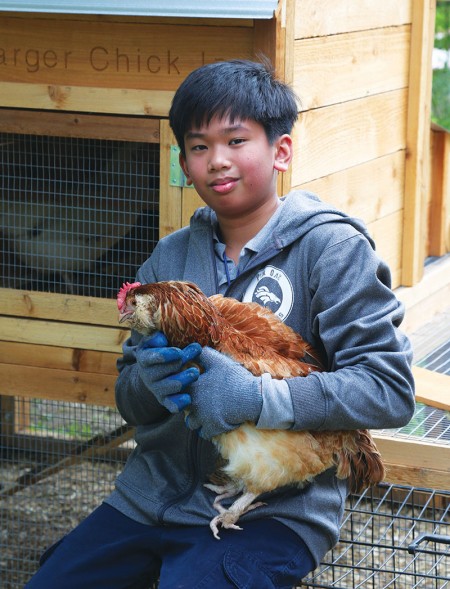 Kevin Liong is especially comfortable with chickens because he has them at his home in Bellaire. Here he holds “Grampaw,” a sweet-natured French Faverolles hen. “Even though she is a hen, the kids can’t get past her beard,” says teacher Angela Roth. (Photo: lawellphoto.com)

The kids learn marketing as they raise funds for the cooking and gardening classes. And they have a great teacher in entrepreneurship, as well, as one of Angela’s many talents is finding support for those gardens. They’ve organized a weekly Farmers’ Market at the school and are adding a “flea market” of donated items to the fresh vegetables and eggs. It was Izzy who suggested going door-to-door in the classrooms, selling Farmers’ Market leftovers to the teachers.

Angela is especially excited about the funding she’s procured for three new projects. There’s the Diversity Rose Garden, funded by The Garden Club of Houston, which will feature a broad spectrum to represent the respect for diversity in their school. There’s the Monarch Heroes’ Garden, funded by the National Wildlife Federation, to provide much-needed habitat for the threatened Monarch butterfly, which has seen a decline of 90 percent in the past 20 years.

And there’s the Resilient Garden, for which they’re awaiting word from the National Wildlife Federation, aimed at plantings that can withstand the extreme climate conditions that are becoming the norm. In the front entrance to Pin Oak, there’s a large area of trees that floods when it rains. The plan is to remove invasive species and replace them with wetlands plants that do well with intermittent flooding.

Since the beginning, her plantings have been “Texas tough,” and they’ve been chosen with wildlife in mind. Eighteen years ago, when the school was first opened, someone planted some East Palatka holly trees, whose abundant berries now attract a bevy of birds, visible from the cafeteria’s two-story windows. Once they found a Cedar waxwing on the ground, stunned after flying into the window. Since then, they’ve put decals on the windows and have been more aware of the multiple species on display in their open-air aviary.

It’s been gratifying to see collaboration coming in from the community, said Angela. Urban Harvest, Trees for Houston, The Garden Club of Houston and the Native Plant Society of Texas have all been integral. Most of all, however, the Parent-Teacher Organization has been a strong support through the years. It’s been exciting to see parents and students continually enjoying the gardens.

“It seems most adults won’t go out much in the summer because it’s too hot – but if you learn about wearing hats and being in the shade, there’s so much beautiful wildlife here in Houston,” she said. “Being part of the natural world is really inspiring. I feel like I spent 15 years protecting my country; now the rest of my life will be spent in caring for this beautiful area and its creatures, for generations to come.”

Thinly slice or shred the collard greens, or until you have 4-5 cups. Peel the carrot and shred it using a large-holed cheese grater. Slice the green onions.

In a large bowl, whisk together the eggs, water, soy sauce and sesame oil until smooth. Begin whisking in the flour, ¼ cup at a time, until it forms a thick, smooth batter (about ¾ to 1 cup total flour).

Add the collards, carrots and green onion to the batter and stir until the vegetables are mixed and everything is evenly coated in batter.

Heat ½ tablespoon oil in a non-stick or cast iron skillet over medium heat. Once hot, add ¾ cup of the vegetable and batter mixture. Press it down into the hot skillet to form a circle, about 6 inches in diameter and ½ inch thick. Place a cover on the skillet to hold in the steam, which will help the collards soften as it cooks. Cook the pancake until golden brown on the bottom (3-5 minutes); then flip and cook until golden brown on the second side. Pile the cooked pancakes on a plate and cover with foil to keep warm until ready to eat. Add more oil to the skillet as needed as you cook the pancakes.

Mix all of the above, gently, and shape into 12 large balls. Use a large, deep pan to cook all of the meatballs at once. Add salt and pepper to taste.

(Note: If you are short on time, you can use a good quality of marinara sauce and add ½ cup of chopped fresh basil leaves. You can also add a ½ teaspoon of cumin and a stick of cinnamon to the sauce. You can also add a drained, large can of garbanzo beans to extend the recipe.)

Heat oven to 400. Put parchment paper on cookie sheet. Heat water and butter to a rolling boil. Stir in flour. Stir quickly over low heat for about one minute or until mixture forms a ball. Remove from heat, beat in the eggs, all at once, until dough is smooth. Scoop scant ¼ cups onto sheet, making 12 of similar size.

Bake for 35 to 40 minutes until they are puffy and golden. Cool, cut off tops, and remove any wet-looking filaments.

Beat a pint of cold whipping cream in a cold bowl and with cold beaters. Once you like the consistency, add powdered sugar to taste and mix in the inside scraping of one vanilla bean. Enjoy!