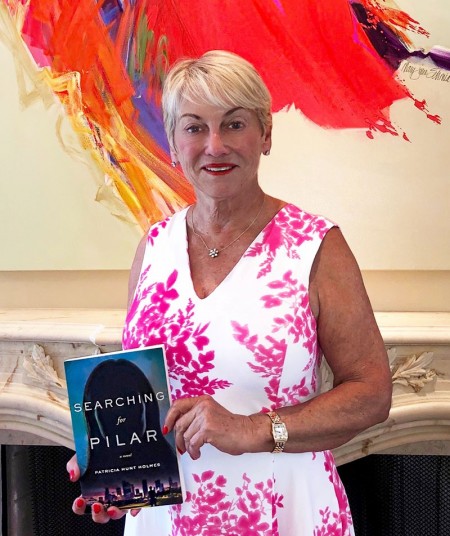 Pat Holmes smiles proudly as an author with her first novel Searching for Pilar.

I would have guessed Pat Holmes was a West Coast girl with her blonde hair, blue eyes and bronzed tan if I hadn’t done my research on her. I knew we would get along when I noticed that her red nails matched her red lipstick being a beauty lover myself. As I sat down to interview Pat, her youthful glow and positive energy truly inspired me to get to know her and tell her incredible story.

According to her mother, Pat was an avid storyteller and loved to write as a child growing up in New Jersey. Pat remembers enjoying the 1940s Brenda Starr Reporter comic strip in the newspaper, which portrayed a spunky redhead known for her glamorous looks and reporting adventures. In high school, she wrote stories for the school’s literary magazine and went on to attend the University of Missouri with the desire to be a creative writer or a journalist, so she majored in both. Little did Pat know where her passions would take her and the profound impact her words would have on people.

Pat Holmes is the type of person with many ambitions but unlike most, she’s able to dedicate the time and effort to each one while maintaining her sanity. When she took her first creative writing course in college, she told herself that she didn’t have anything to say to the world at the age of 18, so she decided to focus on international journalism. But along the way, she took courses in European studies and languages, which made her fall in love with history. Pat graduated from the University of Missouri well accomplished and proceeded to get a PhD in Russian and South Asian history and with an exciting plan to head to law school.

“I did public finance, meaning tax exempt bonds, and they’re used for governmental projects and non-profit projects primarily…[but] you’re also selling securities, so you have to tell the story of the company, the underlying borrower,” she explained. Pat exceled at typing up memos with her writing background and found it easy to speak for those who didn’t have a voice. She spent an impressive 30 years as a public finance attorney at Vinson & Elkins LLP and retired in 2012, but she knew she wanted to seriously focus on creative writing.

Eight years ago, Pat started taking classes at Inprint, a literary organization in Houston for readers and writers. She told me that “there’s a difference between historical writing, legal writing, and creative writing [in that] each one is very specific.” However, whether you’re passing down stories from previous generations or speaking for those who can’t, the storytelling aspect remains the same. This is exactly what Pat likes about writing.  Around the same time she was taking classes, she helped start a nonprofit that offered legal services to immigrants called Justice for Our Neighbors Houston.  Through networking, she discovered Freedom Place, a shelter for sex-trafficked women founded by The Church of St. John the Divine in River Oaks.

“I had never heard of sex trafficking until I went there, and I met all these beautiful young women who had horrible pasts and were victims,” she explained. She said she was shocked to learn that Houston was the largest hub in America while researching and that her friends proved as oblivious to sex-trafficking culture, which exists not just in the city, but in their neighborhoods. “I always thought Houston was this beautiful, clean, family-oriented city and here it’s the biggest hub in the country for girls being sold,” she admits. This particular issue struck a chord with Pat being so close to home and she saw an opportunity to write a book to spread awareness and inspire necessary change.

The research process for her thriller/suspense novel Searching for Pilar was a truly immersive experience. “I met a lot of people, I talked to people, I had two people who grew up in Mexico read the book for cultural correctness,” Pat tells.  “I wrote the book starting in Mexico, [and] I worked with a guide on where things would have happened in Mexico City. But two-thirds of the book takes place in Houston and almost everything in there, the big things, I read about somewhere happening to somebody,”  Pat says.

The story follows Pilar, a struggling wife and mother who is abducted in Mexico City at a fake job interview and sold into sex trafficking in Houston. Now it’s up to her brother Diego to find her and bring her back home safely. “I wrote the book for people like me and like you, people who wouldn’t know about it,” she says. Pilar’s experiences in every chapter are inspired by true stories and are not meant to scare readers but inform them about the horrors of this industry.

Pat has received much acclaim since Searching for Pilar was published in April 2018 and she believes there is much more public awareness today than when she first started writing in 2014. She says she hears responses to her novel like, “I didn’t know,” I didn’t realize what it was,” and “I didn’t realize how bad it was for the individuals involved and for their families” and that proves to her that her dedication to exposing sex trafficking in society was imperative. The book has given her opportunities to travel on a speaking tour and talk to book clubs. This past April, she was even recognized by Portugal’s honorary consul in an elaborate ceremony for her efforts alongside the head of MD Anderson and other award-winning physicians at the Four Seasons Hotel in Houston.

People constantly ask her how to get involved and she recommends that they visit The City of Houston’s Anti-Human Trafficking site and look through the list of organizations. In particular, she suggests checking out Freedom Place, YMCA, Houston 20, United Way, Women’s Initiative, Houston Women’s Center and United Against Human Trafficking.

Now, Pat is in the middle of writing her next novel. Her upcoming thriller discusses themes of “greed, ambition, and the difficulties in the working world about what’s ethical and what’s profitable,” so stay tuned. She has also recently started the research process for another novel as well, which will involve the Texas foster care system. 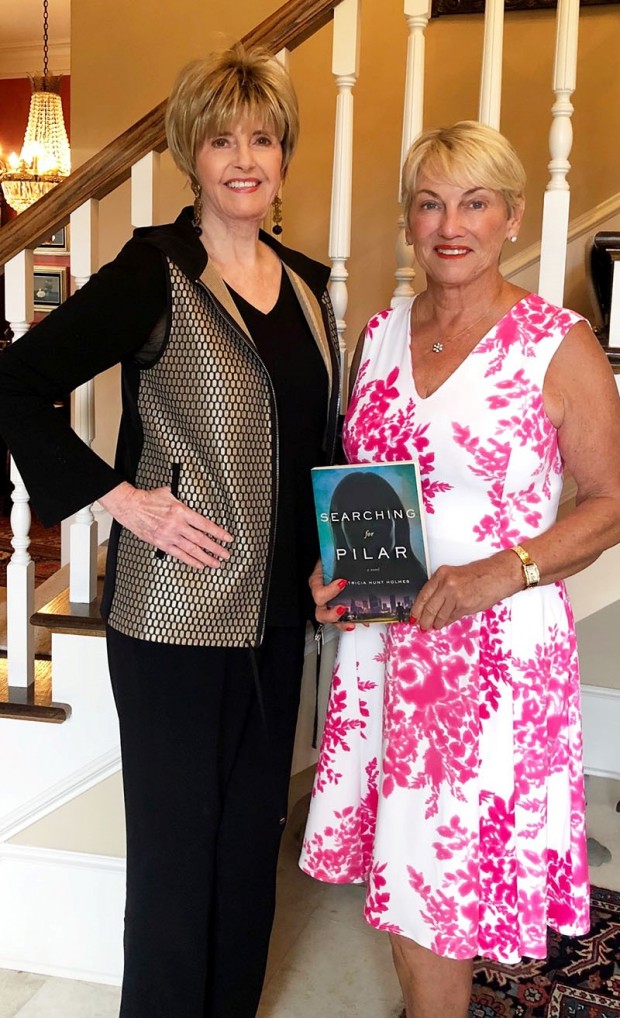