A Performance to Remember 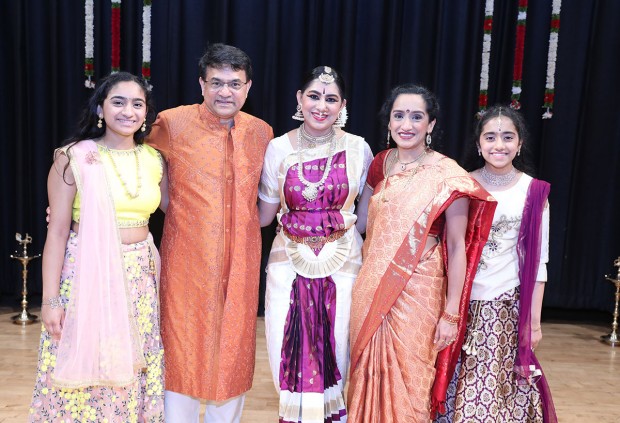 For many students, college is all about trying new activities – maybe it’s improv, playing a new sport or trying out for the debate team. For Tarini Kumar, college was when she returned to her original passion: classical Indian dance.

A graduate of Bellaire High School and a current sophomore at The University of Texas at Austin, Tarini has been a dancer for as long as she can remember. 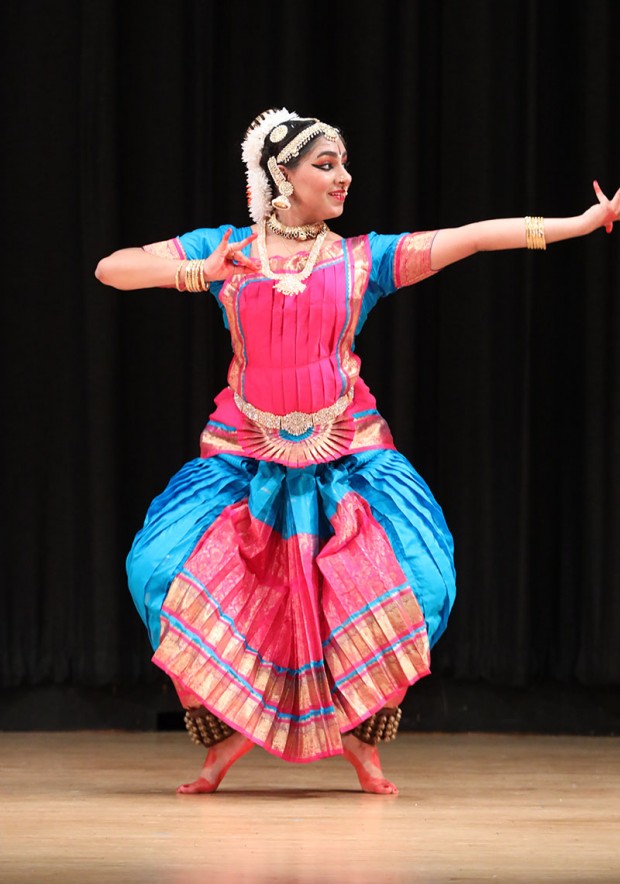 “She’s always moved,” said Tarini’s mom, Supriya Ramanathan. “From the time she could stand on two feet, she’d make these little actions in front of buildings and reflective mirrors. It was obvious she’d dance.” A trained classical dancer herself, Supriya naturally enrolled Tarini in Bharatanatyam dance classes from an early age. Bharatanatyam is a form of classical dance originating in the Hindu temples of the Tamil Nadu region of India. It traditionally combines elaborate footwork with arm gestures and facial expressions to communicate stories and legends from Hindu texts.

Even as Tarini moved between cities during her childhood – from Houston to Philadelphia and back to Houston – she continued taking dance classes. By her freshman year of high school, she was on track to start preparing for an “Arangetram,” or debut performance. Arangetram literally translates to “assent of the stage” and it’s a solo performance that marks a key milestone for a trained classical dancer.

“It’s your teacher’s way of saying, ‘I have taught this student a repertoire, and they know how to dance,’” Tarini explained. “At the same time, it’s the beginning point for your entire life as a dancer.” 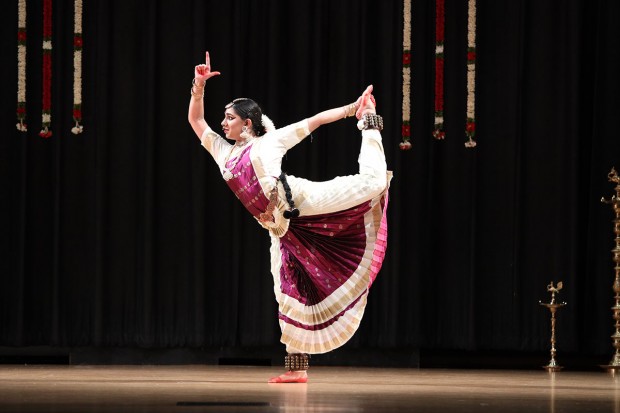 This is a pose from the dance called Shankara Shrigiri depicting Lord Shiva and the moon in his hair. (Kalith Talison of Reflection Media)

Typically, students begin formal Arangetram training in May and then complete the two-to-three-hour solo performance the following August. But soon after Tarini started preparing, other high school commitments got in the way.

At the time, Tarini was a freshman in high school and was dedicating much of her time to the Bellaire High School drill team, the Bellaire Belles. She stayed at school until 6 or 7 p.m. every day for drill team practice and then she’d come home and do her homework while sitting in the splits, Supriya said.

“She was forcing her body and muscles to acquire the flexibility,” Supriya said. “As I saw her going through all that, I was realizing she wasn’t able to dance as much, and Bharatanatyam was taking a backseat.”

Tarini’s hard work on the drill team did pay off though. By sophomore year, she was on the elite drill team, and by senior year, she served as team captain. 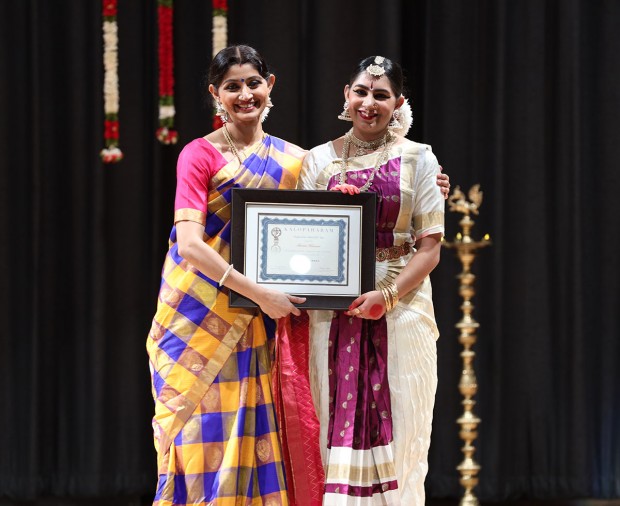 But when her Indian dance teacher Divyaa Unni invited her to go on tour with her in the spring of her senior year, Tarini realized how much she missed Bharatanatyam.

“The tour reignited my love for Bharatanatyam. I started thinking about the Arangetram again, but I was going to college in the fall and didn’t know how that would work.”

But Tarini did make it work. She decided after her first semester at UT that she would make the Arangetram a priority. During her spring semester, she traveled home to Houston every other weekend to train with her dance teacher. During the week, she’d practice with an older student in Austin.

But the real training came when summer break hit. For the past three months, Tarini has woken up at 4 a.m. almost every day and practiced in her home before going to work a full-time summer job in the medical center. In the evenings, she’d stay up until midnight every night leading up to her performance on Aug. 4. 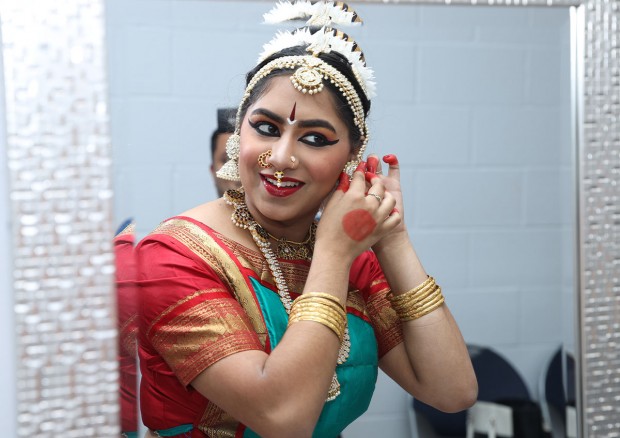 Tarini gets ready for her big performance. (Kalith Talison of Reflection Media)

In the meantime, Supriya was organizing the Arangetram event, to be held at Stafford Civic Center. She invited hundreds of friends and family members and secured a live orchestra from India who would accompany Tarini during the performance.

“For a while, I thought, is she really doing this?” Supriya said. “But I saw her improve. The week before, I saw just how good she had become. Tarini was making fun of me because while I was watching her in rehearsals, my feet would be tapping and my shoulders would be bouncing to the rhythm.”

Tarini says that much of the performance was a blur. And now that the big performance is over, she’s looking forward to continuing to dancing for her own enjoyment. She says she plans to stay involved with her teacher’s studio by performing in their annual show.

“First the makeup took two hours, then hair took another hour, then people started arriving to help out backstage. The actual dancing was about two and a half hours, but it didn’t feel that long,” Tarini said. “It was just a crazy, amazing day.” 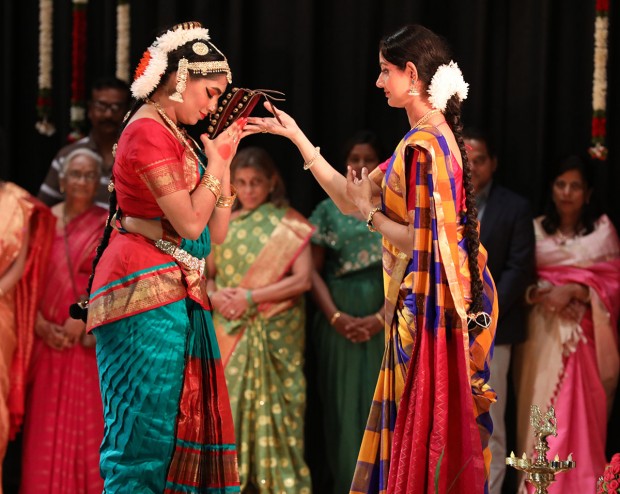 This photo is from the Salangai Pooja, which is a ceremony that takes place before the Arangetram program begins. During this ceremony, the dancer’s ankle bells (salangai) are blessed by God, the guru, the musicians, and family. (Kalith Talison of Reflection Media)