When music was round 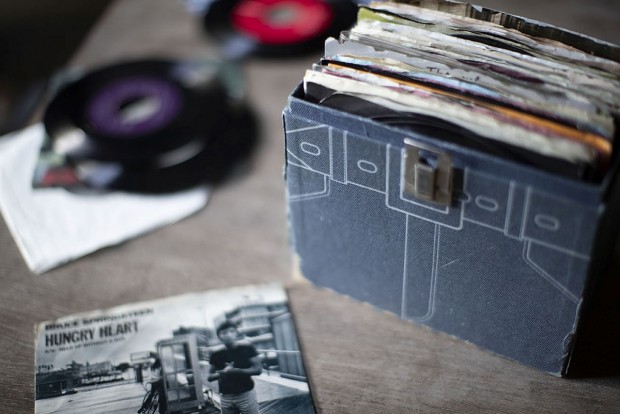 Who remembers 45s? A lot of us choose to stream music now, through phones and smart speakers and laptops, rather than actually own it and store it on a shelf. But there are plenty of us who remember – and love – records.

I’m not talking about LPs, the larger “long-play” records that have 10 or more songs on them and have become the retro darlings of vinyl collectors.

I mean the 45 rpm record, seven inches across, with one song on each side, usually a featured release on one side with a lesser known “B-side” single on the other. The 45 record was released in 1949 by RCA Victor and was popular through the 1970s.

I bought my first one in the summer of 1972. While listening to disc jockey Casey Kasem host the weekly American Top 40 countdown on 610 KILT-AM radio one Sunday morning, I heard a song that I had heard the previous evening while watching The Carol Burnett Show.

Later that day, I asked my dad to take me to a discount department store called SAGE, located at the corner of Beechnut and Loop 610 where Lowe’s stands today. I hurried to the record department to make my first 45 purchase. For 88 cents, The Night the Lights Went Out in Georgia by Vicki Lawrence became the first 45 record in my collection.

I offer no apologies for this choice.

Once I was home, I placed the disc on my hi-fi stereo record player. As I listened to Vicki Lawrence sing the murder ballad over and over, I would play a verse and pause the record while I wrote down what I had just heard. I continued this process through the entire song until all the lyrics were written down. If asked, I can still sing every word. I am rarely asked. 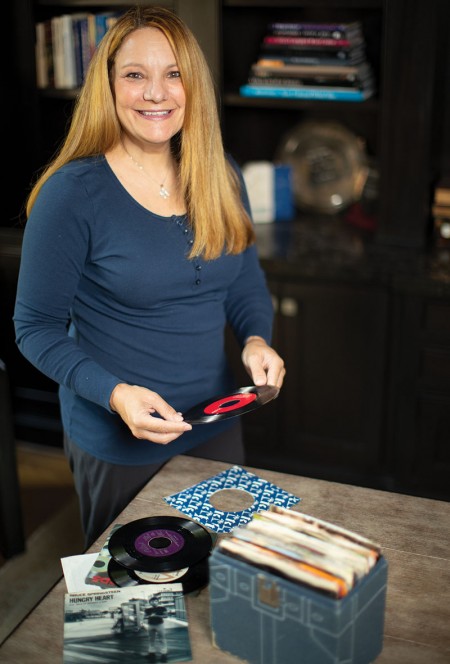 SHE’S GOT THE LOOK Where else would a vintage 45 record collection be stored, other than a denim-look case? Elise Newman has held on to her treasures. (Photo: Dylan Aguilar)

Other Buzz-area residents say they, too, vividly recall their first 45.

“Rock the Boat by The Hues Corporation was one of the first I owned, and I still have it!” says Elise Newman, a travel agent. “I received it for Chanukah. I got a bunch of 45s at the same time. Still the One by Orleans. Silly Love Songs by Wings.”

Attorney Jeff Horowitz remembers his first 45, Indian Reservation by Paul Revere and the Raiders. “It was the first 45 I purchased on my own when I was 11. I remember buying it at a record store near the Lewis & Coker grocery store on Hillcroft in Maplewood. I think it cost a dollar. I thought it was a cool song. I liked the lyrics about maintaining pride in the face of oppression, and the music was dramatic…. It’s written in a minor key, the verses build up slowly, and the chorus explodes. I still have it.”

My favorite place to browse through records was Cactus Music on South Post Oak Road in the Meyerland area. While this location has long since closed, the music chain has been in business for over 40 years. Their selection of 45 records might have been dwarfed by the long aisles of LP albums, but I never went home empty-handed. You can still buy records at their Upper Kirby-area store at 2110 Portsmouth St.

One of the great memories from the era of 45s was listening to iconic DJ Casey Kasem count down Billboard’s Top 40 records based on sales from the prior week. KILT-AM radio distributed yellow Top 40 lists at stores around Houston. On some happy occasions, there would be lyrics from the No. 1 song of the week on this list.

As the 1970s came to an end, so did the 45 record. Singles had become less popular than buying full LP, or long-playing, albums. Vinyl records were soon joined on the store shelves by clunky 8-track tapes. Not long after, cassette tapes became popular. When CDs showed up in the early 1980s, they pretty much vaporized all the other formats until vinyl staged a nostalgic comeback many decades later.

While the way we listen to music may have changed, our favorite songs are with us forever.

Editors’ note: Share your favorite 45s with other readers by emailing [email protected] or commenting below.