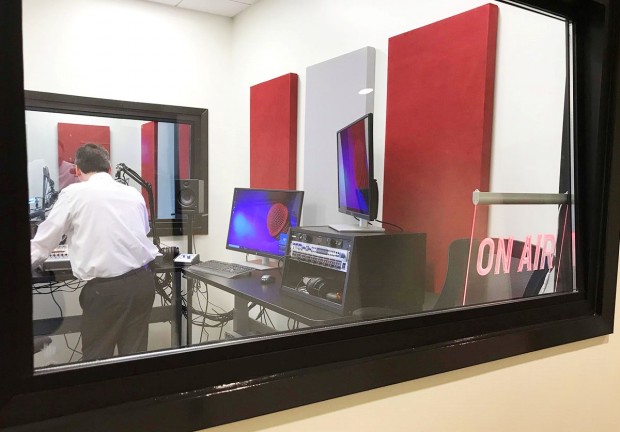 The new iMav radio was completed in August, having been started several years ago by Anthony Leakey, who works with students to record and produce shows.

When Anthony Leakey walked into the Campus Center in May, he was overwhelmed by countless boxes of unassembled iMav Radio sound equipment covering every surface of two rooms.

A few years ago, Headmaster Mark Desjardins proposed a radio station for the school community. Leakey, Assistant Director of Fine Arts, Upper School Digital Media, was made head of the project since he had studied radio, television and film production for his undergrad degree.

Leakey’s past experience primarily focused on FM radio. Once he started drawing the setup of the station, however, he realized that an FM station would be too expensive and inaccessible.

“A lot of schools with FM stations are now selling them for several hundred thousand dollars, and then make an internet station,” Leakey said. “How many students carry a radio in their backpack?”

After deciding to create an internet radio station, Leakey applied for radio licenses: one through the Library of Congress to transmit radio programs, another through SoundExchange to obtain music rights. He also started surveying students about what type of music the radio should play; the majority voted for “oldies.”

“In my mind, oldies were from the '50s or '60s, so I told the students I was surprised they even knew that music,” Leakey said. “Their response was, ‘Oh yeah, the '80s were the best time ever.’”

The license guaranteed the station rights to play a variety of songs ranging from the '80s through the 2000s; however, according to Leakey, songs from other time periods may air during a scheduled show.

“There’s something for everyone,” senior Celia Adams said. “If you’re not necessarily into one kind of music, we’ll have a show with a different kind of music.”

Adams is one of many students involved with the station. In addition to the students working on the radio as an extracurricular, students in DigiApps will record and produce a show on the radio and work on MavTV as part of the course.

“It’s cool because the radio gets out to the parents and alums, not just St. John’s students,” Manji said.

Although the station is capable of producing live shows, most shows will be prerecorded so that students can produce shows in their own free time without following a strict schedule.

“I can’t do a daily ‘Aiden K. Manji show’ at 7:30 a.m. Eastern time – that’s just not going to work,” Manji said. “We also need to prerecord so we can edit the shows while people are first learning how to make the shows.”

Leakey hopes to attract more students through the iMav Radio website and app to host more shows, including “1946,” a show about the history of the school.

“I’ve been amazed at the amount of interest,” Leakey said. “In the first week of opening the radio, I was flooded with emails from people who want to work on the station.”

According to Leakey, Desjardins’s vision for starting iMav Radio was to “do it right and be the best at it” while connecting the St. John’s community

“Every show, we’re thinking about who our audience is going to be: the Middle School, Upper School, alumni,” Leakey said. “We want to bridge the gap between students, alumni and parents a little more.”

Spring Fling at The Moody

8:00 pm to 10:00 pm
Location:
Moody Center for the Arts
END_OF_DOCUMENT_TOKEN_TO_BE_REPLACED