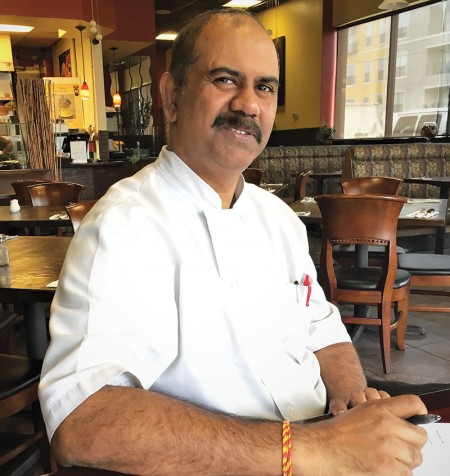 Indian food in Houston entered a progressive era in the early 2000s with the opening of two upscale restaurants. In New York City – the center of American dining at the time – the buzz was about a new generation of high-end Indian restaurants that argue with credibility that their cooking is just as sophisticated as French and Italian cuisines. And many Houstonians and diners across the country got their first glimpse of regional dishes from all over India that went beyond the usual bottled curry mishmash.

The thinking at the time, including that of Verandah chef-owner Sunil Srivastava, is that there would be more restaurants like chef Anita Jaisinghani’s Indika (now shuttered) and Kiran Verma’s namesake, Kiran’s. That hasn’t been the case.

The number of posh Indian restaurants in the Bayou City area in the last two decades have been few and far between. Compare this to the explosion of upscale Latin, Japanese and Mediterranean restaurants. Despite its ancient, colorful culinary traditions, diners still look upon Indian food as cheap eats, said Sunil.

Even so, the 45 year old hopes to change some people’s thinking with his Chef’s Table tastings and well-scripted modern menu at the new 2,960-square-foot Verandah Progressive Indian Restaurant (3300 Kirby Drive). He is optimistic, too, that Indian haute cuisine eventually will get the recognition it has in New York City and London; both boast Michelin-starred Indian restaurants, including Tamarind, where Sunil was the executive chef in 2005-06 when the restaurant first appeared in the Michelin Guide’s recommended section. Here, the Jaipur-born chef talks about aged basmati and why he grinds his own spices.

Why and when did you and your front-of-the-house partner and wife, Anupama, moved to Houston?

Houston Chronicle critic Alison Cook once said that you’re one of the most underrated chefs, probably because your restaurant was outside the loop. Now, you’ve closed W’Kana to focus on Verandah inside the loop. How did you come up with the name? And what two dishes should we try on our first visit to Verandah?

In many Indian homes, there was a verandah where families and friends gathered to dine or simply socialize. The verandah is an important place in an Indian home. As to what dishes to try… I would start with the kebabs. People think kebabs are as simple as adding a few things to cubed meats, then grilling them. But to do it right, it’s a multi-step process. For me, it takes two days to prep the kebabs before grilling them in the clay oven.

You also grind your own spices for the kebabs, biryanis and curries. That’s really labor intensive. Why bother?

I use a stone grinder. You should see it. Indian food is old, bold and beautiful. But we’ve lost some of that in doing food in a typical pattern, like using bottled spices or powders. People have this perception that Indian food is cheap. But it really isn’t. Spices – black pepper, fennel, cardamom, saffron and cinnamon – are very expensive and volatile. It’s like coffee; once you grind the beans, the flavors and aromas start to fade. Just compare a spice like coriander that has been ground the day of vs. a store-bought bottle that has been sitting in the warehouse two months and then another two, three months on the grocery shelves.

You’re noted for your complex biryanis, cooked dum style. What is dum? And do you need to order in advance?

Biryani takes about 20-25 minutes, so you can’t just order and expect it to arrive at the table right away. Dum is a technique where you layered parboiled rice with raw chicken, goat, lamb or jackfruit along with fruits and warm spices before sealing the top to create a pressure cooker. Cooking biryani is very precise. I’m also particular about the rice I use. For my biryani, I like to use basmati that has been aged three years or more. It’s like aged wine. Aging the rice gives it a lot of flavor. I remember my mom buying rice during the harvest, then storing it in boxes and not using the rice until a year later. She was adamant about this.

When you and your family go out to eat, do you have a favorite Indian place? What are some favorite eateries?

When we go out to eat, we go with our kids, and the kids don’t want to go for Indian. They say, “We can eat your food.” So we’ll go and explore Nick’s Italian Restaurant (11511 FM 1464, Richmond). Anything seafood is good there. We also like Ambassador Chinese Restaurant (4326 Richmond Ave.) for Peking duck.