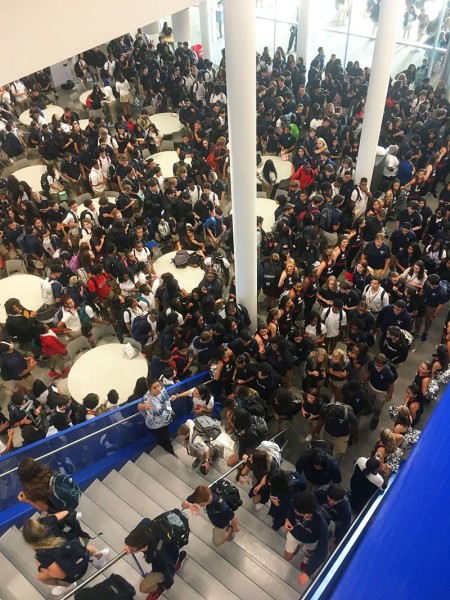 Students make their way from the Great Hall to the main staircase on the first day of school.

Lamar High School’s new building is finally ready for thousands of students to descend upon during the school year.

The new building, which has been in the works for about three years now, features a glass and steel exterior, modern desks and chairs, and innovative technology.

“There were a lot of pieces to figure out and get right, but I feel like we’re on a good path to doing that,” Principal Rita Graves said. “I think we’re in pretty good shape.”

Despite the novelty of a shiny building, many students prefer “Old Lamar” to the new school.

“I prefer the old building because the layout is much easier to remember,” said a Lamar student who wished to remain anonymous. “The campus was larger, which meant less crowded hallways.”

There have also been many complaints about overcrowding on the staircase. The new building only has one main staircase and one emergency staircase for use during passing periods.

“Passing periods are five minutes with the new schedule,” said another student who asked to stay anonymous. “On the first day of school, it took me 15 minutes to get up the main staircase. I am claustrophobic, so I literally had a panic attack on the first day. There were so many people crowding me and pushing and shoving, I felt like I couldn’t breathe.”

However, Principal Graves says that the crowdedness is nothing to worry about.

“Right now, kids are used to ‘when the bell rings, I leave, whether I need to leave or not,’” Graves said. “And if your classroom is in the same place, there will be a point when kids will just kind of stay there; they won’t leave and go downstairs just to see what’s going on. I think over time, it just kind of solves itself in a lot of ways, and some of the things that are created by the newness of it just wears off.”

“Socially, it makes it feel like a small school,” sophomore Stephanie Jimenez said. “You’re with the same people for half of your day which makes you get to know them better. Academically, the classes make you be more responsible and accountable of your own education.”

On the other hand, some teachers are not as happy with the neighborhoods as the students are.

“It is annoying not to have your own classroom,” an anonymous teacher at Lamar said. “I have been at Lamar for a very long time and I am used to having my own space where I can teach my students. Now, instead of having a classroom, I have a corner of a neighborhood that I have to share with other teachers.”

To the people that are unsure about the new school, Principal Graves says to give it a try.

“I think being open-minded is really important,” said Graves. “Change is hard for a lot of people, whether you’re an adult or a little kid. We can sit around and admire the things that don’t work or the things we don’t like or that are a challenge to us, or we can shift our perspective and start solving those challenges.”