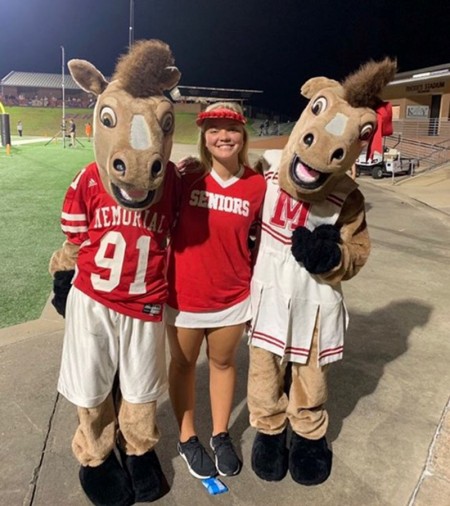 Memorial High School celebrated the start of the school year with a pep rally, volleyball games, and a win for the first varsity football game of the season.

The camo pep rally got everyone hyped up for the first game of the season. The cheerleaders, Markettes, and Mascots got everyone up and moving in preparation for the game on Saturday night. Mascot Taylor Dixon said, “It was a great game to start the season with. It was a lot of fun!” The pep rally, which took place during advisory, was a great way to end the week and get everyone excited for what was to come. Students dressed head-to-toe in camo cheered loudly which translated to the student section at the game the following day.

The game took place at Rhodes Stadium in Katy against Seven Lakes. After being down 13-7 at the half, a touchdown took them into the lead. A field goal and a forced fumble kept them in the lead and helped them win the game. “Everyone was really ready to play after working hard all week in preparation for the first game of the season,” said Defensive Tackle Jack Dragna. “Everyone got on the field and did their jobs. It was a good team win.”

Despite being down at the half, the game wasn’t over for them yet. Kicker Eliot Glatman kicked a 45-yard field goal to bring back some hope. A touchdown later, the Mustangs were in the lead. After the victory, the mascots, the players, and the fans all gathered together to end the game with a tradition that has been going on for years.

Best of luck to the football team during the rest of the season!