There's no Planet B: Students Participate in Climate Strike 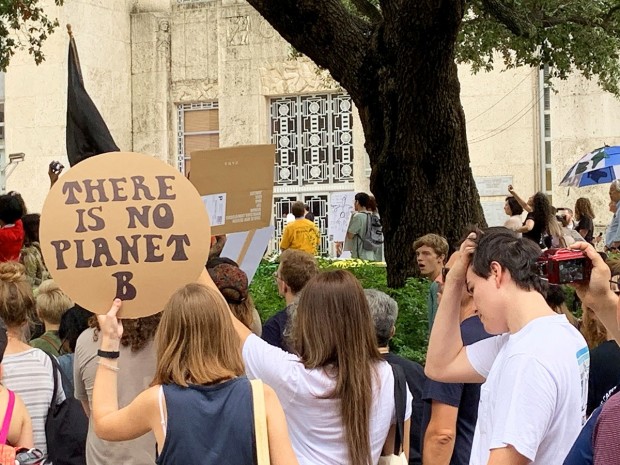 “Is there a planet B?" A protester holds this sign in the crowd at HTX Climate Strike 2019.

“There is no Planet B.” A sign with this catchy and multi-directional phrase struck me upon my entrance to Houston’s 2019 Climate Strike that took place last Friday. This climate strike was a youth organized event prompted by teen climate activist Greta Thunberg. Hundreds of people of all ages, from very young to old, flocked to the steps of City Hall to participate in a potentially groundbreaking event where society acted as more than mere pawns in a round of chess.

Student speakers and climate change advocates from Houston-based schools, such as Bellaire High School, Sharpstown International School, High School for the Performing Arts (HSPVA), etc, discussed the growing issue of climate change in ways that communicated how growing CO2 emissions are not only harming the world today, but are laying a slippery pavement of un-sustainable life for the upcoming generations. Each emphasized word, each rhythmic phrase and every determined end note of the speeches led the crowd into uproars of chants and joyous cries that aimed for the offices in which held the city’s change makers.

Senior at Sharpstown International School Paula Ventura declared in her speech: “We need to bring in the fire hose” to combat the metaphorical fire that represents climate change’s impacts. This display in words on how climate change has caused a fire to brew within the lives of the liv-ing, inspired the crowd to gain courage in the face of tomorrow. 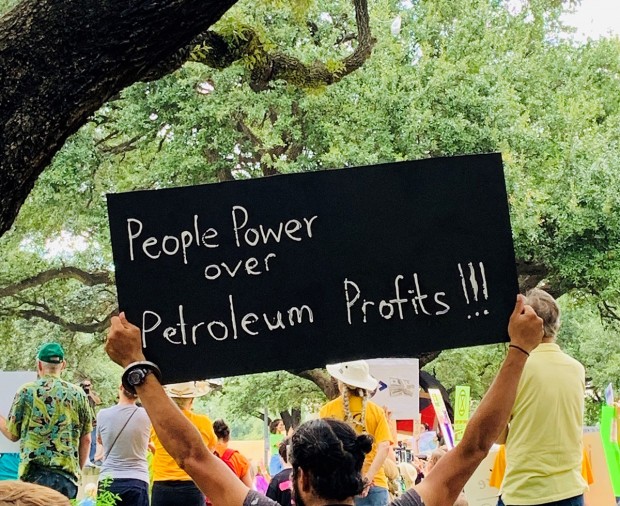 A protester at HTX Climate Strike 2019 listening to student speakers.

Being a part of the symbiotic respond and acclaim that was occurring at the Climate Strike en-thralled my senses. I felt invigorated by the students, and the crowd, becoming their own change makers and not waiting for others to make the call. As the speeches and chants rolled though, and the rain of tropical storm Imelda threatened, I thought about the inspiration in which each youth speaker/presenter gained to participate in such a display. In my school, students learn about climate change and the impacts it has upon the world’s non-renewable masterpieces.

Lily Shenoy, senior at British International School, appreciates that BISH teaches students how “anyone can make an impact, no matter if it is small or large.” BISH illustrates the importance of ad-vocacy and action in various ways. Donna Jimenez, senior at British International School, says that she “loved the United Nations Global Goals presentation at school, because it made worldly affairs, such as climate change, more accessible for students.”

Although climate change may have been on the minds of some politicians and geopolitical offi-cials in the mid to late 1900s, today’s youth are empowered to make a positive change while they are still young. This is what it is all about. The stereotypical view of youth strikes as coagu-lated teenage angst and rebellion is, in truth, a time of fortification where silenced thoughts are transferred to advocation, action, and awareness. So, it is up to the majority to answer the real question: is there a Planet B?