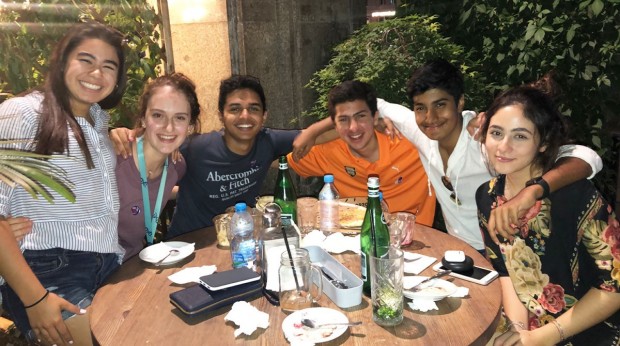 Ranked by Niche’s latest rankings as one of the top 10 STEM schools in the city of Houston, The Village School prides itself in producing student leaders and innovators who take learning beyond the walls of their classrooms.

This past summer, six Village juniors (three teams of two students) were invited to speak at the 2019 Nord Anglia Education – Massachusetts Institute of Technology (NAE-MIT) STEAM Festival in Warsaw Poland. At the event, they had the opportunity to present prototypes of products they designed during the school year. Speaking on the topic of “Harnessing the Inventiveness in Us,” the students were a part of a select group of 150 kids from around the world.

“My overall experience was incredible,” junior Ashley Turnage said. “I learned a lot from people who are experienced in scientific fields, and I made lasting relationships with like-minded people.”

The students were able to partake in this event due to the school’s unique collaboration with MIT. Through ‘MIT Challenges’, The Village School students are tasked with finding innovative solutions to relevant world problems. After being assigned the prompt in September, teams worked to research and construct a product prototype to solve a global problem of their choice. After presenting their projects in March and winning in a school-wide competition, the six students were invited to speak about their projects on an international level. 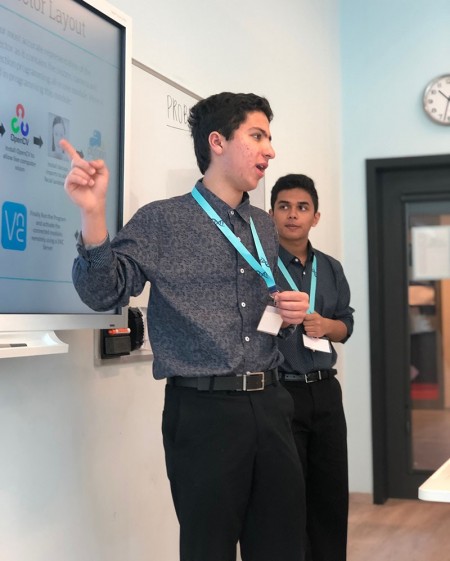 (From left) Loic Duggal and Joshua Varghese present details of their project at the NAE-MIT Festival.

Srinivasan worked with Turnage to develop this prosthetic device, an innovation they call PiezoPace. After winning first place at the MIT Challenge at school and attending the workshops offered at the Warsaw STEAM Festival, they are now applying for a provisional patent.

“The experience was amazing,” Srinivasan said. “Presenting alongside successful CEOs and skilled innovators was eye opening and showed us the potential that PiezoPace has.”

Juniors Mariela Aponte, Beatriz Dos Santos Bechara, Loic Duggal and Joshua Varghese were also invited to participate in this five-day event and partake in activities that ranged from coding drones and findings solutions for disasters.

Aponte’s and Bechara’s project, EcoChew, is a biodegradable gum that aims to address chewing gum litter by allowing consumers to swallow the gum. In addition to placing in the school’s MIT Challenge, the team won second place in The University of St. Thomas’s 2019 BOLD Ideas Pitch Competition and received a monetary award to further develop their idea.

Duggal’s and Varghese’s innovation is a device, known as Vision Alert, that works to combat the issue of falling asleep while driving. The product consists of a small camera that records the driver’s face and is attached to a pair of glasses. The computer that is attached to the camera analyzes the footage to recognize whether the driver has closed both his/her eyes for more than three seconds. A signal is sent to the driver if their eyes are found to be closed for longer than the accepted time.

Currently, the innovators behind PiezoPace and Vision Alert are working under the guidance of doctors at Houston Methodist to further develop and improve their products.

“I learned that I [can] be successful [by] combining my passions for entrepreneurship and for the sciences,” Turnage said.