The Best Mac and Cheese Ever, According to Questlove 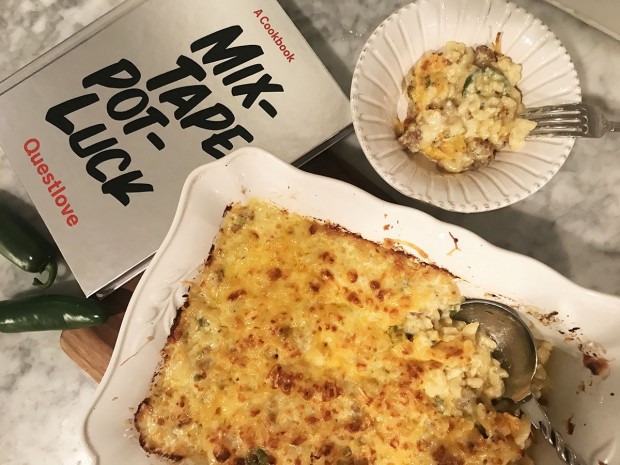 The musician Questlove says that fellow musician Q-Tip's Mac and Cheese is the best he's ever eaten.

Questlove’s Mixtape Potluck: A Dinner Party for Friends, Their Recipes, and the Songs They Inspire is not a standard cookbook.

Yes, it’s full of recipes and photos that make you want to make them. But more than that, it’s filled with famous people and inspiring music, and their own personal recipes that they would choose to bring to a potluck.

“Food is the oldest form of communication and community,” Questlove writes, “and this is an attempt to replicate and renew that energy.” You might know Questlove better as the leader of The Tonight Show Starring Jimmy Fallon band. He admits he’s not a cook, but he enjoys good food, and a good dinner party.

For a full review of Mixtape Potluck, read Cindy Burnett’s article here. Cindy and I have collaborated again to review a cookbook and a recipe (which is extra-fun now, because Cindy participates in the ABRAMS Dinner Party, which means she reviews cookbooks as they are released by the publisher). We studied Questlove’s friends’ recipes and decided to try Q-Tip’s Mac and Cheese. We chose this recipe for two reasons: 1) everyone loves mac and cheese; and 2) Questlove makes the bold claim that Q-Tip’s Mac and Cheese is the best he’s ever tasted. Best mac and cheese ever? We’re in!

This mac and cheese was pretty darn good. It uses five – five! – kinds of cheese and gets a kick from jalapeños and garlic. When you add sausage to the mix, it’s a meal. One that kids, adults, pretty much anybody will love.

The best mac and cheese ever does not come easily, though. I am not sure I’ve ever used as many pots and pans for one recipe (see my photo). But beauty comes with a price. 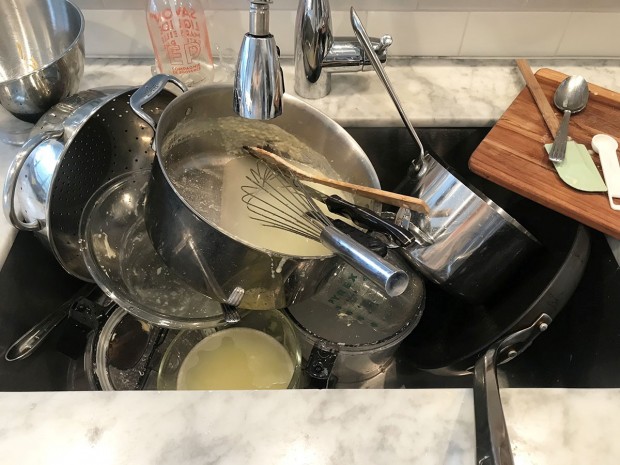 The author's sink after making Q-Tip's Mac and Cheese: It's delicious, and it's a project.

The premise of Mixtape Potluck is that music inspires food, and food inspires music. “When you cook, pay attention to what music you’re playing in the background. See if the music affects what you do,” Questlove says. The book stands as a version of a potluck where Questlove’s famous friends bring their favorite recipes. Inspired by how he felt about the friend, he assigned them a song to spark their creativity.

For Q-Tip’s Mac and Cheese, Questlove writes, “I have tried to respect a rule of not sending people songs on which they themselves appeared. It’s been hard, though. And now I’m going to start breaking it. Why? Because when a person agrees to contribute to a cookbook, and that person is a founding member of a legendary hip-hop group, A Tribe Called Quest, that has recorded – along with its songs about community, spirituality, and political reality – songs about food, the tendency is to choose one of them. I did. I can’t think of Q-Tip and food without thinking of ‘Ham ‘N’ Eggs.’ The song was one of the first conscious rap anthems I ever heard, mostly because it did what no one else had dared to do: It took those childhood foods that all of us held dear and held them up to nutritional scrutiny.”

If you make Q-Tip’s Mac and Cheese from Mixtape Potluck, consider playing “Ham ‘N’ Eggs” while you work in the kitchen. And let us know how it goes: Send us a photo and post it to social media tagged with #MixtapePotluck.

Questlove writes: “You can make this up to two days ahead of time and then heat it for the party. That makes it a peace-of-mind dish. And you can substitute different cheeses, though I wouldn’t tamper too much with this recipe, as Tip has calibrated it to perfection. Seriously: I’ve never had better mac and cheese.”

Preheat the oven to 375 degrees. Butter the bottom and sides of a baking dish (preferably 10 by 10 inches but 9 by 13 inches will work as well).

Combine ¼ cup of each cheese in a small bowl and set aside for later.

Heat the oil in a Dutch oven or other heavy-bottomed large saucepan over medium heat. Add the jalapeños and cook for about 1 minute, until lightly colored. Add the garlic and stir until fragrant, about 30 seconds.

Meanwhile, pour the milk into a small saucepan and warm over medium heat; be careful not to let it boil.

Whisk the flour into the jalapeño-garlic mixture, then very slowly whisk in the hot milk. Cook, whisking constantly, for about 5 minutes, until combined and no lumps remain in the flour. Slowly add the whisked egg yolks and cook for an additional 1 to 2 minutes, or until completely combined and slightly thickened.

Remove the sauce from the heat and whisk in the thyme, cayenne, and all of the remaining cheeses until they are completely incorporated. Add ½ teaspoon salt and the black pepper; taste and adjust the seasoning if needed.

If using sausage, remove it from the casing and cook in a medium sauté pan over medium heat until fully cooked and browned.

Bring a medium pot of water to a boil, salt the water, then add the macaroni and cook for 7 minutes or until al dente.

Drain the macaroni and fold it into the sauce, then turn it out into the prepared baking dish. Stir in the sausage, if using. Top with the reserved cheese.

Place in the oven and bake for 10 to 15 minutes, then serve.