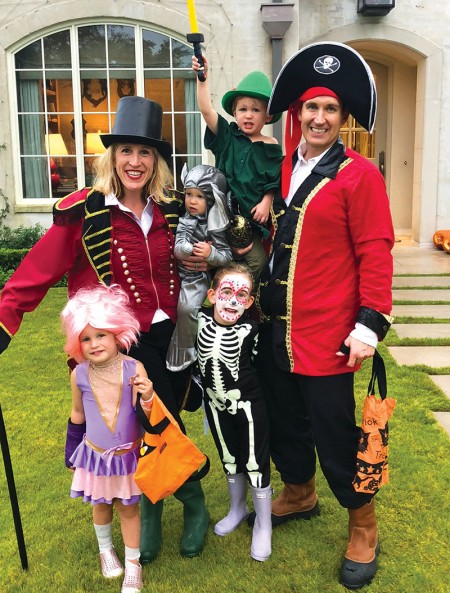 The McInnes family takes Halloween seriously. Deborah and John dress up with their kids, (front, from left) Annie Cate, Mollie, (back row, from left) Forrest and Banks.

Buzz Baby is a column about life with little ones. Writer Annie McQueen has three children age 5 and under.

From the traditional (yet always adorable) baby pumpkin costume to creative store-bought ensembles like a crawfish, a tiny strongman or a Starbucks cappuccino to simple yet genius creations (like the babe with the power from the movie Labyrinth), my neighbors with babies and toddlers did not disappoint last year for Halloween.

Every time the doorbell rings on Halloween night, it is fun to open it and see the little ones all dressed up – and to scroll through all the pictures posted later on social media. You have to give those parents props – it is not always easy to dress up a tiny human in a costume.

Older kids are adorable too, but there’s something about a baby in a creative and clever Halloween costume that just makes everyone smile or laugh. It makes for a memorable first Halloween when the parents get into it.

One of those Halloween-loving types is Deborah McInnes. Deborah and her husband John have four kids, Mollie, Annie Cate, Forrest and Banks, and they take Halloween seriously. They begin to plan their costumes a year in advance, the day after Halloween each year.

In fact, the couple’s shared love of Halloween and anything costume lit a spark when the two started dating. As their family has grown, their love of Halloween has too, and the kids get to experience and share it from birth.

It must have been fate when they found out that their second daughter, Annie Cate, was due on Halloween day back in 2013. Naturally, they started planning for their in-hospital Halloween celebration.

“We immediately thought about costumes [for the hospital] and did the whole pregnancy,” laughed Deborah. “We didn’t think twice about dressing up in the hospital, it was a natural thing for us.” When you talk to Deborah, you cannot help but smile. She has that type of energy that radiates. 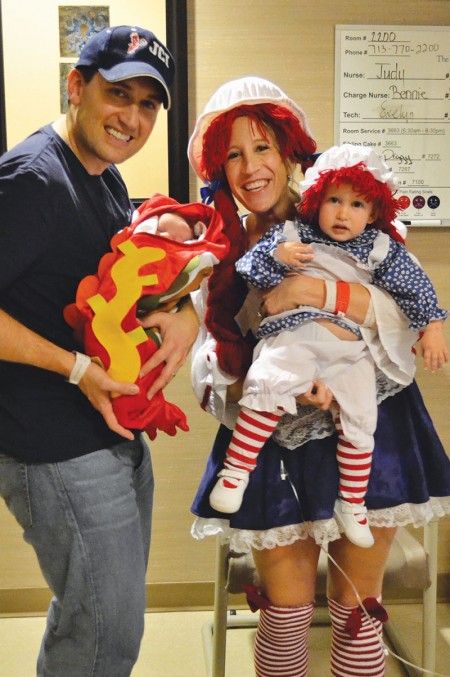 When daughter Annie Cate was born the day before Halloween in 2013, the family dressed up in the hospital and trick-or-treated with then-toddler Mollie at the nurses’ station.

While most expectant moms pack for their hospital stay with comfortable robes, nursing bras, and more, Deborah was selecting which Halloween costumes to pack. “It was like making sure we packed our toothbrushes. Halloween is like Christmas for our family,” said Deborah.

Annie Cate arrived one day early, on Oct. 30. The couple had opted out of finding out the gender, so when Annie Cate arrived, Deborah was surprised to have a girl. “I was certain she was going to be a boy,” she recalled. Deborah had packed a head-to-toe Raggedy Ann costume for herself and had planned for baby McInnes to dress as Raggedy Andy (if he were a boy).

Luckily, the Halloween pro packed some backup gender-neutral costumes: a tiny hot dog costume for baby Annie Cate and a James Coney Island uniform for John. Deborah wore her Raggedy Ann costume and Mollie, a toddler at the time, dressed as a tiny Raggedy Ann.

“It was actually one of the more fun Halloweens and absolutely hysterical,” said Deborah. “I walked down the hall with my IV in, just popping out a baby less than 12 hours before while Mollie trick-or-treated at the nurses’ station.”

For Halloween 2018, for their fourth child Banks’s first Halloween, half of the McInnes family dressed as characters from the movie The Greatest Showman. Deborah was the ringmaster, Annie was Anne Wheeler (the trapeze artist), and baby Banks was an elephant.

Deborah says as her children have gotten older, they often like to decide on their own costumes – which John and Deborah love, and they get into character with them. In 2018, Forrest wanted to be Peter Pan. “Naturally, John was Captain Hook. Mollie insisted on being something scary, so she went with the Day of the Dead skeleton.”

This year’s Halloween costumes for the McInnes family are already mapped out, but the rest of us will have to wait until Oct. 31 for the big reveal.