'The Hate U Give' Conference at Awty 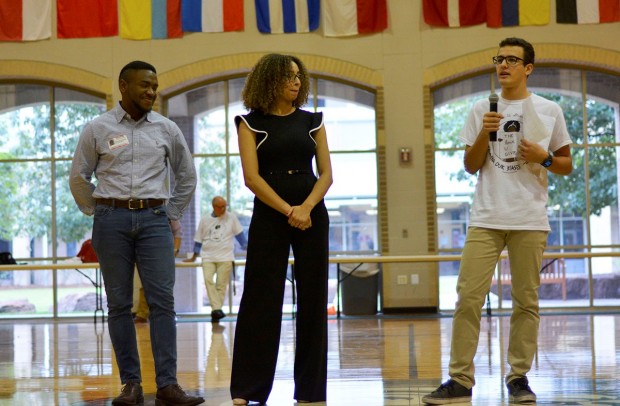 Pictured (from left) are speakers Blessing Utomi and Raven Schwam-Curtis along with Student Council president Tyler Nokleby who give a brief overview of the exciting day ahead. (Photo: Awty Yearbook Club)

With a student body that represents over 60 countries, The Awty International School is known for embracing diversity and encouraging cultural fusion. Every year, Awty hosts an International Festival as well as a variety of cultural assemblies dedicated to certain heritages such as Chinese New Year, Francophonie, Go Texan Day, and many more. In order to further this mission of inclusiveness, the school decided to inspire a day of discussion by taking a trip to the movie theater to watch The Hate U Give.

Sam Waugh, Head of Upper School, explained the origins of this idea, which has been in the works since December 2018. He said it all started with Kenady Scott, a current senior, who asked him to be her supervisor for her extended essay on The Hate U Give. After reading the novel and finding it intriguing, Mr. Waugh decided to request the committee of grade level coordinators to give it a read as well. Upon acknowledging the fact that a possible project revolving around The Hate U Give could benefit Awty and its international community, the faculty then set to work planning this unforgettable day.

The Hate U Give was released on Oct. 18 of last year and has gained critical acclaim ever since. Based on a book of the same title by Angie Thomas, the movie revolves around a young girl named Starr who witnesses the death of her friend due to police brutality. This issue of police brutality has been circulating in the United States for years and has always caused controversy in the media and justice system. In order to fully understand the implications of this issue, as well as its ties to the overarching racism at hand, Awty arranged for the entire Upper School to attend a private viewing of The Hate U Give on Sept. 9 at the nearby Edwards Marq*E theater followed by an afternoon of discussions and workshops. 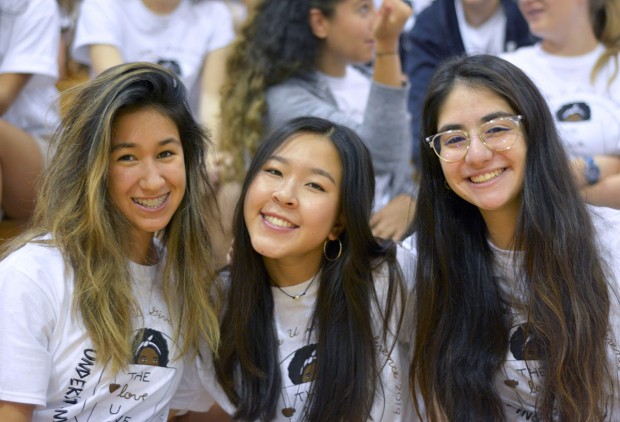 The day started off with a brief introduction by the student council president Tyler Nokleby. “The purpose of today is not to convince anyone else,” stated Nokleby, “it is to broaden our views and perhaps consider a perspective that we have not considered before.” He also introduced two of the guest speakers including Blessing Utomi, a sophomore at Columbia University, and Raven Schwam-Curtis, a junior at Cornell University. Both speakers are Awty graduates from recent years.

Before the movie started, Clint Smith, Awty alumnus Class of 2006 and current Ph.D. student at Harvard, shared the way he expresses his struggles and experiences being an African-American. Clint is a National Poetry Slam Champion who believes the issues revolving around African-Americans today are encompassed by decades of historical discrimination. He gave an overview of a compressed outline of American history in relation to the rights of African Americans and asserted that it is an injustice to expect African Americans to forgive and move on in a time period that is only one-seventh of the time period in which they faced dehumanization and contempt from society. He also spoke of how he relates to Starr in the movie, who like most African-American kids, received “the talk” from their parents at a young age. Unlike what this phrase usually denotes, “the talk” within the African-American community is when the parent teaches their kids the procedure to follow if stopped by law enforcement. In order to avoid this cycle of violence between police and African-Americans, parents have resorted to this method to fully ensure their child’s safety. 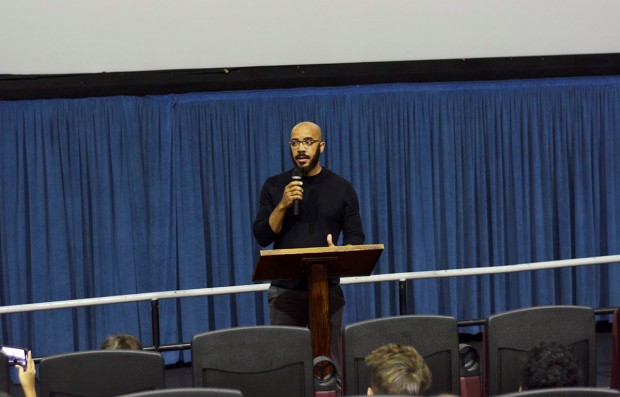 Pictured is Clinton Smith who delivers a riveting speech as a precursor for the movie The Hate U Give. (Photo: Awty Yearbook Club)

After the movie, a panel discussion consisting of seven speakers took place to help showcase the real-life connections to The Hate U Give. One of the speakers was Arthur Williams, a former Texas state trooper who served for 23 years and now works for security at Awty. He explained the technicalities of the scene where the police officer shoots Starr’s friend and points out the mistakes that both the police officer and Starr’s friend made. Columbia sophomore Utomi recalled his struggles to navigate both the black community at home with a single mother and four kids, as well as the private international school community with classmates of a higher socioeconomic status. From getting to Awty by taking two Metro buses to seeing the school garage filled with Range Rovers, Mercedes, and other cars, Utomi said he had to make an effort to not let these details drag him down and instead motivate him to work even harder. Cornell junior Schwam-Curtis shared her personal experiences of code switching at home and school which occurs when an individual utilizes different linguistics for different situations or spaces. Sometimes, Schwam-Curtis even felt she was almost alternating personalities while at home and at school. Ruben Trochet, a student in the French program at Awty, explained the differences between the overarching issue of discrimination in France as well as the United States. He stated discrimination and exclusion in France are more so towards certain religions and that they rarely build up to violence due to the lack of weapon availability. As for the discrimination and exclusion in the United States, the issue tends to be targeted towards people of color and minorities. There are more violent attacks or hate crimes in our nation, so racism is publicized and wide-spread throughout social media or news platforms. 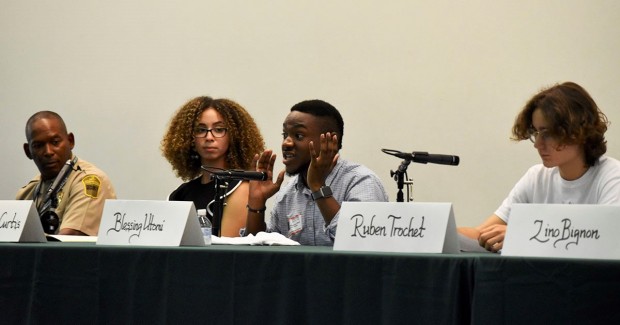 Pictured (from left) are Arthur Miller, Raven Schwam-Curtis, Blessing Utomi and Ruben Trochet who engage in thoughtful discussion regarding the movie and its connections to real life. (Photo: Awty Yearbook Club)

The afternoon was filled with productive discussions and workshops among the various groups that Awty organized to stimulate interactions between students at different grade levels and from both the International and French programs. Students debated their opinions on various scenarios or statements, and then tied the movie to real-life as well as the community at Awty. After the meaningful day came to an end, students went home and shared what they learned and experienced as a result of this day that was dedicated to something special rather than just the daily classes.

Waugh hopes to continue these kinds of initiatives more often in the future so students and teachers can use the opportunity to dive deeper into other global issues. He also would like to involve the student body more and wants to incorporate the planning of these events into the Student Council’s projects. Either way, stay tuned for future events that encompass Awty’s mission of inclusivity and diversity.