A Local Student-Led Approach for a Global Issue 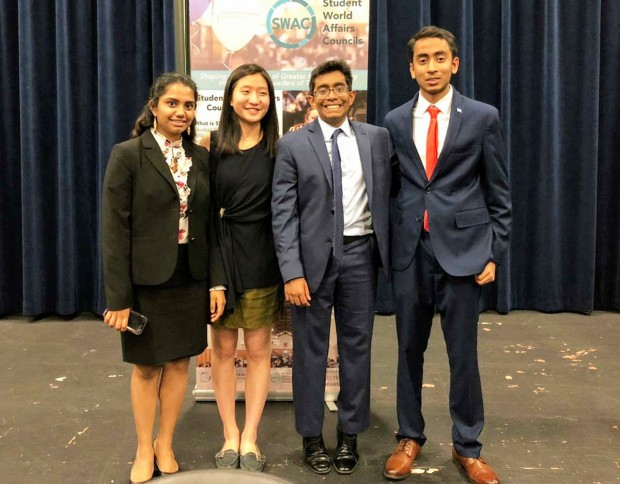 (From left) Student leaders and event organizers Puneetha Goli, Connie Lin, Pavithr Goli and Raghav Aggarwal pose for a picture at the conclusion of the event.

According to Conversation International, the concentration of carbon dioxide in our atmosphere is the highest it has ever been in three million years. Recognizing the gravity of this issue and need for thoughtful conversation, students from The Village School, Bellaire High School and Austin High School worked together to organize the Sustainable Solutions Summit (SSS), a one-day student-run symposium that focused on the intersection between goals of economic development and environmental conservation.

“My motivation behind this was that I wanted this conference to be a summation of all the lessons I have accrued in high school [and of] the activities I have invested a lot of time in from policy to economics,” said Bellaire High School senior, Connie Lin. “I wanted to create an opportunity to allow students to look at these issues in a more nuanced, interdisciplinary manner as my way of giving back to all of the different opportunities I have been given throughout high school that exposed me to these issues.”

Lin, however, was not the only student that organized and ran the event. I served as Co-Secretary General alongside Connie Lin. Pavithr Goli, a senior at The Village School, and Raghav Aggarwal, senior at Austin High School, served as Co-Under-Secretary Generals for the event. Zaid Ali, junior at Bellaire High School, served as the Director of Communications and Marketing. These five students worked in partnership with the World Affairs Council of Greater Houston to help secure speakers and publicity opportunities for the event.

“When I had the first wisps of this idea four months ago, deciding to execute it was a risk I carefully considered because I was not sure if I was able to pull it off,” Lin said. “I was most afraid of putting in a lot of initial work but luckily because of all the support I had from my team and the World Affairs Council, everything ended up being amazing!” 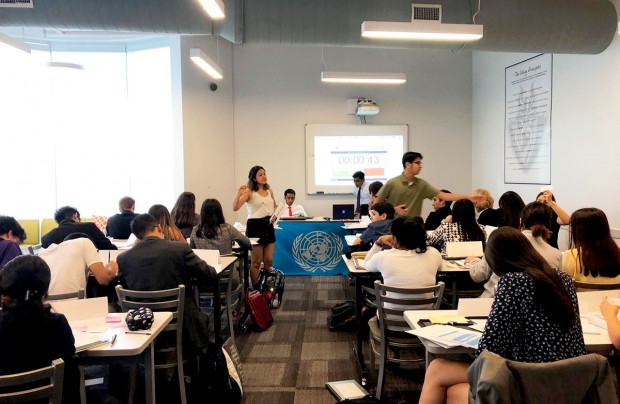 Students debating on the topic of sustainable urbanization in the Social, Humanitarian and Cultural Committee (SOCHUM), one of the two Model United Nations committees of the conference.

The student-led event, which took place on Saturday, Oct. 5, was highly interdisciplinary, consisting of two key components: a morning speaker series, led by professionals in various sectors ranging from business to politics, and an afternoon Model United Nations conference, where students had the opportunity to apply the information they acquired during the speaker series to formulate solutions for the problem through discussions with peers.

The event opened with a speech from Dr. Amanda Rico, the former Director of International Education at World Affairs Council and the current Director of Global and Social Awareness at Duchesne Academy, who focused on the importance of youth awareness and activism in politics and world affairs. Speakers on the panel included Amanda MacDonald, a Project Associate working on wind project development in the Western United States, Krystal Nelson, the Co-founder of Texas Impact Alliance and Founder and CEO of I-Impakt Consulting, and Raj Salhotra, candidate for Houston City Council At-Large Position 1 and former intern for the Obama Administration, where he researched energy and budget policy.

“I enjoyed learning more about a topic that I have never discussed or even thought about before, and it was really cool to see different perspectives,” The Village School freshman Aditi Ramesh-Iyer said. “The conference was well put together and I gained a lot of insight from the professionals. There were a lot of things that happened at the conference that quickly made me realize that I always have to bring something new and important to the table.” 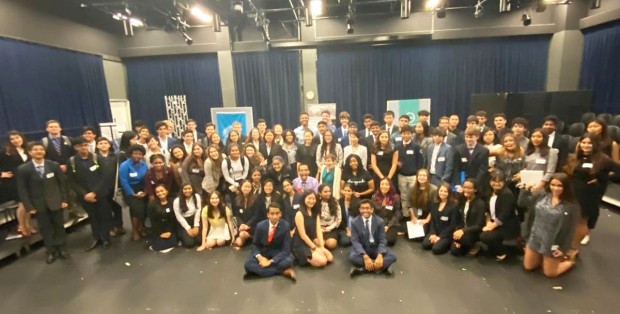 Students and guest speakers posing during the SSS MUN Conference.

The event was considered a success by the student leaders, registering nearly 115 students and even welcoming a team from San Antonio. Although the event was only one day long, the participants and student leaders were thrilled to see the active discussion and debate that took place in the UN-style committee sessions.

“Through the SSS MUN conference, I learned skills that I will be able to use in later conferences as well as my daily life,” The Village School freshman Kahani Maholtra said. “[Although] I competed in Model United Nations in middle school, this conference was so well organized that in addition to competing with other eager and receptive students, [we] had the opportunity to listen to respected members of our community discuss their take on the topics we were debating during the conference itself which I thought was really cool. It gave me an inside look on what Model United Nations, and the actual UN, are striving for with these meetings and debates: it is about developing resolutions to pertinent topics in our modern society, together.”