Hope on a dragon boat 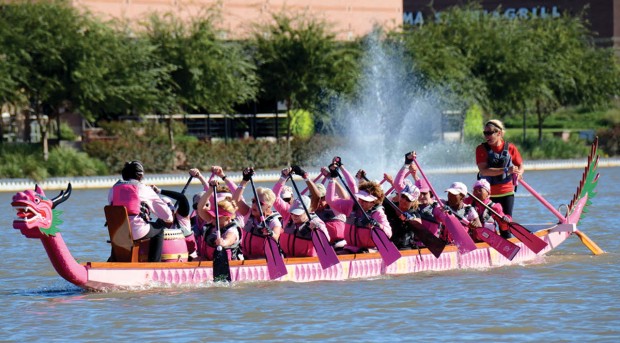 In pink jerseys and life jackets, Jane Shoppell and her teammates paddle their more than 500-pound pink, dragon-headed boat across Clear Lake.

Shoppell’s team, Pink Phurree, is one of 225 teams across 25 countries and six continents formed to support and provide hope to breast cancer survivors. Recently, Pink Phurree expanded its membership to other female-related cancers. The women practice several times a month and compete locally and globally. They say dragon boating has transformed their physical and emotional health.

“We’ve all heard those words, ‘You have cancer,’” says Shoppell, a former IT employee at Shell who lives in Bellaire. Her bright pink Pink Phurree polo shirt is printed with a dragon logo. “We support each other, and it’s also a great workout.”

Texas' first all-women and cancer-survivor dragon boat team, Pink Phurree was founded in 2007 and joined the International Breast Cancer Paddlers Commission in 2011. The first dragon boat team of breast cancer survivors formed in Canada in 1995 after a sports medicine doctor was inspired to test the theory of whether upper body exercise was too strenuous an activity for someone diagnosed with breast cancer. IBCPC hosts an international competition every four years.

Pink Phurree members range in age from their 30s to their 70s. In addition to competing, interested members also travel to a spring training camp in Florida for instruction from world-renowned coaches.

In 2018, Shoppell flew to Florence, Italy, with 10 teammates to paddle in IBCPC’s international competition. They joined members of a Dallas team, Breast of Texas, and together, the women paddled on the Arno River through the heart of Florence. Afterwards, they marched in a Parade of Nations across the Ponte Vecchio bridge, past thousands of cheering tourists and locals. 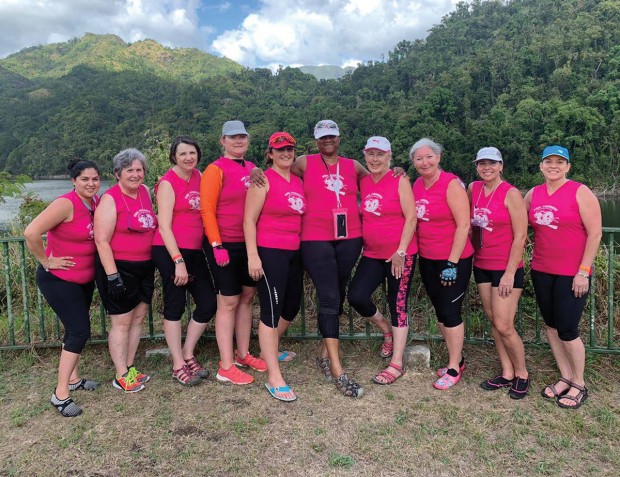 “It’s one of my most cherished memories,” says Shoppell, who joined in 2012, a year after her diagnosis of breast cancer and subsequent surgery and radiation. She was drawn to a Pink Phurree table at an MD Anderson survivor conference, and is overjoyed she gave it a shot. “In school, I was the kid that got Cs in PE,” she says. Now, she considers herself an athlete.

Leigh Meineke, an attorney in Memorial, joined the team in 2018 after watching a TV story about it. Joining a rowing team was on her bucket list (along with seeing a live taping of Saturday Night Live and attending the hot air balloon festival in Albuquerque). “A paddling team, all women and cancer survivors? When I saw Pink Phurree, I felt like I hit the jackpot,” she says.

Meineke grew up in Meyerland. She was diagnosed with ovarian cancer in 2016 and went through chemotherapy. “It completely changes your life,” she says. “Your priorities change.” She points to Shoppell and fellow member Gale J. Yandell. “These ladies understand.”

Now, Meineke has been cancer-free for 29 months, but the fear of recurrence hangs heavy. “It’s always here,” she says, pointing to her temple. But Pink Phurree helps. “We’re stronger moving forward together.”

Yandell, a chaplain who lives in Meyerland, joined in 2017, a year after she was diagnosed with breast cancer. She underwent chemotherapy, radiation and a bilateral mastectomy. “It’s so good for us mentally, emotionally, and spiritually. I think of being on the boat as a celebration of life. It’s invigorating.”

The team practices at 6:30 p.m. Thursdays in Sugar Land using a boat they borrow from the Texas Dragon Boat Association, and at 7:30 a.m. two Saturdays a month in Clear Lake on their own boat. Team members pay annual dues, and the team supplies life jackets and oars. On Oct. 12-13, Pink Phurree will compete in Sugar Land’s annual dragon boat race on Brooks Lake.

Shoppell says the team is recruiting new members and hopes to raise money – through fundraisers and sponsors – for maintenance and insurance, plus a smaller boat to use during practice sessions. “We’re definitely looking for new members and supporters. It’s just so much fun,” she says, “and I’m in the best physical condition I’ve ever been in.”