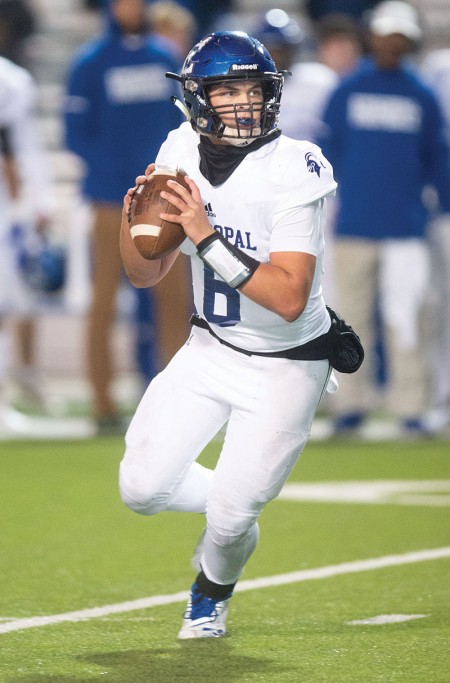 With a 28-3 victory over Navasota, it was an impressive start to the football season for the Episcopal Knights.

“Navasota is a team with a strong tradition which is also predicted to win its district in UIL Class 4A football, so we feel like it’s a real benchmark win for our team,” said Knights head coach Steve Leisz. “We have a new power-oriented, ball-control offense, and our quarterback Nick Mayberry is doing a great job of keeping everything together.”

“We had one recruiting outlet refer to us as ‘Offensive Line U,’” said Leisz. “Not just because of this current crop of players, but also the great players that preceded these guys.” Episcopal product Walker Little, now starting at Stanford University, is rated among the nation’s top collegiate offensive linemen, while Little’s former Episcopal teammate Marvin Wilson is a pre-season All-American for the Florida State Seminoles. Meanwhile, Gio Pancotti, who graduated from Episcopal a year prior to Little and Wilson, is now playing for the University of Houston as a graduate transfer from Texas Tech. 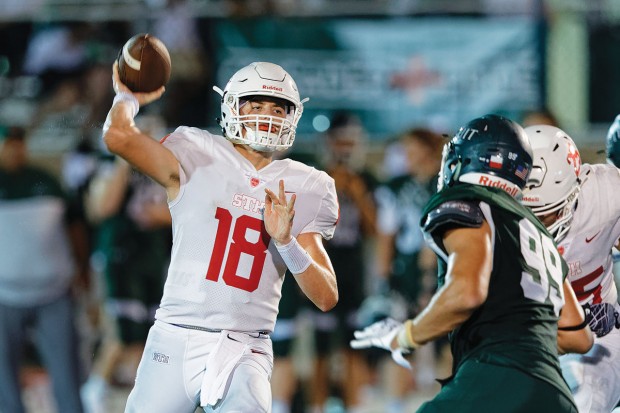 IN GOOD HANDS St. Thomas junior Maddox Kopp has stepped into the role as the Eagles’ starting quarterback this season. The strong-armed 6’5” quarterback threw for 230 yards and two touchdowns in his first varsity start against Strake Jesuit. (Photo: Wayne Donnelly)

Despite a season-opening 28-17 defeat to the rival Strake Jesuit Crusaders, there are plenty of positives moving forward for the St. Thomas Eagles football program. “Our kids played hard and put forth a great effort,” said Eagles head coach Rich McGuire. “That’s a really big program for us to compete against, and I think as the game neared its finish, their front lines just wore us down a bit.”

The game marked the first varsity start for Eagles junior Maddox Kopp, who follows in the footsteps of Peyton Matocha. Matocha is now playing for the Miami Hurricanes. “Maddox is a smart and strong armed 6’5” kid who makes good decisions on the field. He threw for 230 yards and two touchdowns in his first varsity start against a tough Strake Jesuit defense.”

Up front for the Eagles, McGuire welcomes the return of lineman Cooper Thomas, who had 20 tackles in that Strake Jesuit game and is committed to play college ball at Columbia University. “Cooper is a three-year starter who brings great leadership to our program. He always seems to be improving.” But the strength of the Eagles offense may very well come from a talented crop of receivers, with a foursome of players in Spencer Kryger, Josh Crissmon, Drake Martinez and Cameron Bonner all providing plenty of firepower to the Eagles’ offensive attack.

Facing the defending UIL Class 6A state finalists in their season opener, the Bellaire Cardinals more than held their own in a hard fought 56-35 defeat to Beaumont Westbrook. “I don’t know that you’re ever pleased with a loss, but I saw some really good things from our team,” said Cardinals head coach Herb Kunz. “Our kids are more physical than last year. They accepted the challenge and went toe to toe all four quarters against a really good team that nearly won the state championship last season.”

The Cardinals are led this season by senior quarterback Darius Reed, who is being recruited by several collegiate programs. “Darius has really matured on the field,” said Kunz. “He’s very athletic and makes good decisions.” Another big offensive weapon for the Cardinals is senior wide receiver Willie McCoy, who’s a dual threat as a standout return man on special teams. “Willie is a game changer,” said Kunz. “You put the ball in his hands, and big things happen. He definitely has a chance of playing at the next level.”

On the other side of the ball, the Cardinals are led by the return of standout middle linebacker Rodney Dansby. In addition, Kunz said, junior defensive back Walter Truitt and sophomore safety Elijah Costa are among those also making their mark for the Cardinals’ defense.