From Houston by train 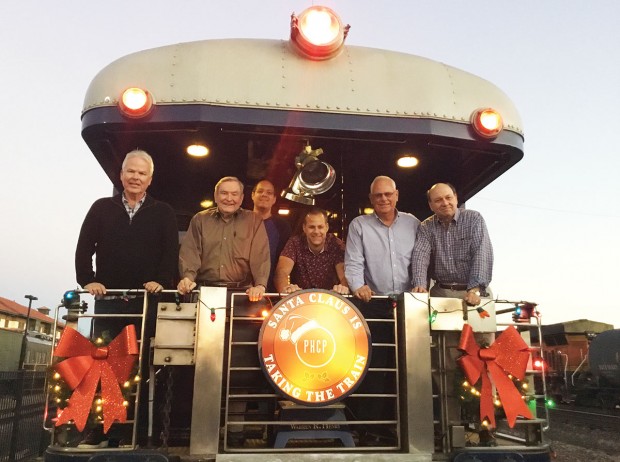 You know the Houston Amtrak train station is a well-kept secret when even Uber drivers have never heard of it.

And I haven’t met one yet who has.

And many people, not just Uber drivers, don’t realize that an overnight passenger train, one of 15 run nationwide by Amtrak, goes through that station three times a week, on its way back and forth between New Orleans and Los Angeles. The Sunset Limited has sleeper cars, a dining car and a glass-topped lounge car and makes stops along the way, including in San Antonio, El Paso, Tucson and Palm Springs.

My husband and I use it to go to Big Bend National Park for his birthday every spring.

There’s no easy way to get to Big Bend. You can drive (nine hours). You can fly either to El Paso (and then drive four to five hours) or to Midland/Odessa (a three-hour drive).

Or you can take the Sunset Limited, leaving one evening and arriving in Alpine, near Big Bend, by late morning/early afternoon the next day. The local rental-car place, Alpine Auto Rental & Sales, will meet you at the train station with a car. (Big Bend’s an hour’s drive from Alpine.)

On the train, you can eat dinner and breakfast in the dining car and sleep in a sleeper car.

And you’re on a train!

How cool is that?

Honestly, there are pluses and minuses. 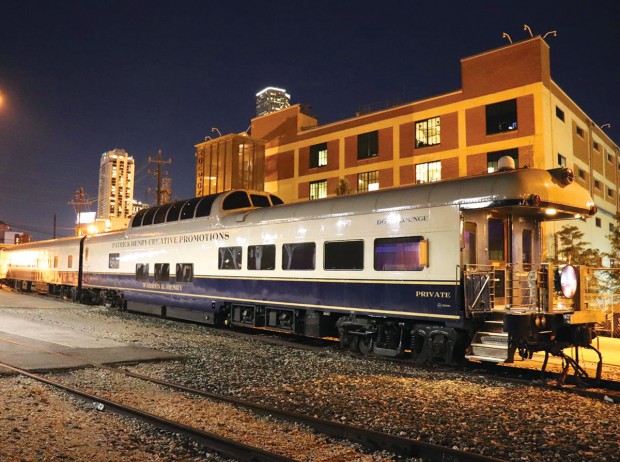 When they're in town, the Warren R. Henry, a 1955 dome lounge car, and the Evelyn Henry, a 1954 sleeper car, make their home at the Amtrak station in downtown Houston. (Photo: PHCP, Inc.)

This mode of transportation can be more fun and more comfortable. The coach seats, good for day trips such as to New Orleans from Houston, are very affordable and a lot bigger than an airline seat. You can walk around the train, meals are served in the dining car and there’s a snack bar.

Mark Donaldson takes the train once or twice a year for long weekends in New Orleans. The train leaves Houston a little after noon, according to the schedule (more on that in the minuses), and arrives in NOLA at 9:40 p.m.

Donaldson, who owns his own small business, Roof MD and General Contracting, uses those nine-plus hours to work. He buys a coach seat, “but I never go to it,” he said. He sets himself up in the lounge car, which has cafeteria-style seating and a snack bar. “I can get candy, a beer, a soda,” he explained. “I pull out my laptop and put on my headphones. It’s the best use of my time.”

According to a post on Amtrak’s blog, movie director and Houston native Wes Anderson is an avid user of overnight Amtrak trains. He is quoted as saying, “One thing you almost always get on a train is time to burn … It can so often be the best combination of peaceful and exciting.” According to the blog, Anderson has traveled coast to coast by train when promoting a movie and while writing a movie script.

Another plus on the train is the dining car. For customers who have booked sleepers, meals aboard the train are included in the price of their ticket (though alcohol is not). Others can buy meals.

The food is surprisingly decent, given that it is made on a train. “I think I had salmon once,” said Donaldson. (He did: “Griddle Seared Norwegian Salmon,” to be exact.)

“The food is OK, it’s fine,” agreed The Buzz’s dining columnist, Dai Huynh, who recently took the train with her husband and daughter to go to Big Bend. “But if you’re going on a train for the food, you’re going for the wrong reason.”

The best part of the dining car is not the food but that the staff seats you with other people. I’ve talked to a retired police chief from Oregon, a pediatrician traveling the country by rail, a Marfa food-truck owner and the editor of a business magazine for marijuana farmers. They all had interesting things to say. 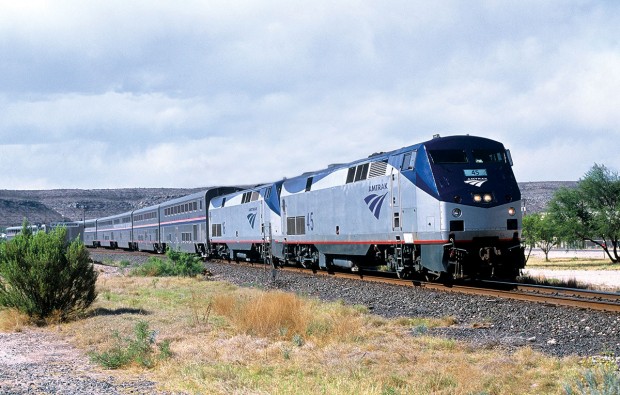 Amtrak considers its trains on time if they arrive within a half hour of the time listed on the schedule – and its long-distance trains don’t do well even by that metric. According to a report by the Amtrak Office of the Inspector General, in July 2018, Amtrak’s long-distance trains reached their last destination on time only an average of 31 percent of the time. (To be fair, the Amtrak trains are running over tracks it doesn’t own, and while, by law, passenger trains are supposed to have precedence over freight trains, the report notes that the law is seldom enforced.)

One Houston passenger reported that he and his wife ended up sleeping in their rental car in the parking lot of the closed train station in Alpine. They kept getting texts that the train was more and more delayed. Though originally scheduled to arrive at 8:45 pm, it didn’t arrive until 7 the next morning.

Still, they continue to travel by train. “We love to use Amtrak occasionally since you get to see a bit more of the country than you do with air travel,” he said. Their latest trip, this summer, was from New Orleans to New York City.

The sleeper car accommodations are fun.

You’re on a train!

In the daytime, think Harry Potter or Wes Anderson’s The Grand Budapest Hotel. Individual compartments with curtains and sliding doors contain, depending on which you choose, two to four seats and a window.

In the evening, the porter turns down the beds. Lower beds are made from the seats, and upper ones pull down.

A minus: Sleeping in the upper bunk is like sleeping on the top shelf of your closet.

Some have their own bathrooms. A private bath sounds good, no? No. The bathroom, which has fixtures that look much like those of an airplane bathroom, will now be traveling with you in your tiny roomette, or really, it’ll feel like you’re traveling in your bathroom. 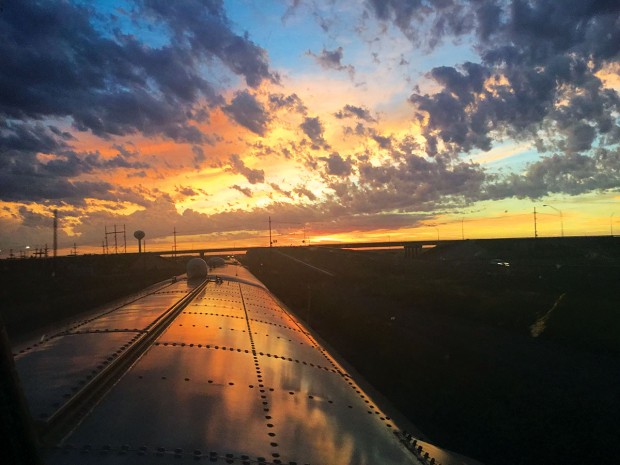 Sunrise in Amarillo seen from a train. (Photo: PHCP, Inc.)

My advice, at least for a one-night trip: Wear comfortable clothes to sleep in, slip your toothbrush in your pocket and make do with the bathroom down the hall.

Passengers on longer trips told me there are shower rooms on the lower levels of the sleeping cars.

But if you’d like more of an Orient-Express vibe, there is another option. You can charter a private rail car. Really. Two have their home base here in Houston, at the Amtrak station, where you can see them when they’re in town: The Warren R. Henry, a 1955 United Pacific dome lounge car, and the Evelyn Henry, a 1955 sleeper car, named after owner Patrick Henry’s parents.

As you might have guessed, chartering private rail cars is expensive. According to the American Association of Private Railroad Car Owners, depending on what you’re chartering and where you’re going, the price can be anywhere from $5,000 to $15,000 per day. Chartering Henry’s two railcars costs $10,000 per day. But for that price, you get accommodations for up to 10 people, as well as a lounge and a dining room, and a private staff of three, including a chef who makes all your meals from scratch.

Private rail cars are attached to the backs of Amtrak trains, such as the Sunset Limited, so you’re still subject to Amtrak delays.

John Bertini, a urologist and the chairman of the board of directors of St. Joseph Medical Center, loves trains. He once even testified as a train expert before Congress about the feasibility of evacuating people by train during natural disasters. (It’s feasible. He helped evacuate 750 people by train during Hurricane Rita.) He’s also the chairman of the board of directors for the Galveston Railroad Museum.

And he has been chartering private railcars, including Patrick Henry’s, for years. “Back when my kids were corral-able, it made for great family vacations,” he said. He’d often take extended family, including both sets of grandparents and cousins. He once invited his friends to bring their fathers and their sons on a trip to New Orleans, where the grandfathers and grandsons then visited the National WWII Museum together.

“Being on the train lends itself to conversation, to being together,” Bertini said. “You get to enjoy the mode of travel.” Indeed, Bertini often travels by train to a destination and then immediately flies back. For him, the train trip can be the point.

For all its eccentricities – starting with figuring out how to book a trip on Amtrak’s frustrating booking webpage – taking a long-distance train trip on Amtrak can be a nice trip back in time: to when people had time to talk to each other and eat together, to read books, take naps, play cards and even just spend time gazing out a window.

“It’s totally fun and underrated,” said Donaldson, who’s planning his next trip, to Lake Charles, via the Sunset Limited.